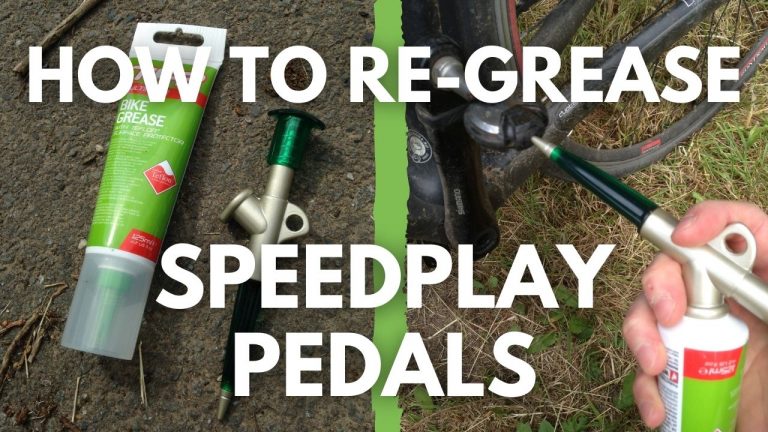 This post is not going to interest everyone, but if you have a strong desire to make precision insertions of oil into certain parts of your bike, then I’m about to blow your mind.

I have found (and used) ((and liked)) an alternative to the ludicrously expensive Speedplay grease gun.

As we all know (yes, we), I’m a massive fan of my Speedplay Zero pedals.

As we also know, Speedplays require a little more maintenance upkeep than other pedals. They contain bearings within the pedal, which need replacement grease every 2000 miles.

The cleats also have a sprung component – they clip around the lollipop-shaped pedals – and these need a bit of dry lube every once in a while (but then, don’t we all).

As I may have mentioned in my long-term review of the Speedplays, I’ve been somewhat remiss in terms of greasy TLC (and I haven’t been maintaining my pedals yak yak yak).

Which brings me to a Tuesday evening about three weeks ago. Finish Line Grease Kit
$18.98
Check price
If you click this link and make a purchase, I earn a commission at no additional cost to you. Weldtite Grease Gun with 150ml Teflon Grease Check price - Amazon Check price - Wiggle
If you click this link and make a purchase, I earn a commission at no additional cost to you.

All Work And No Play

I’ve recently started working again after a three year hiatus (it appears that blogging, like crime, does not pay).

This particular evening I’d made a particular effort, once home, to prise myself immediately into my Lycra armour and get in an hour-long ride.

My pleasure at succeeding at getting out of the house was soon interrupted by a creaking squeaking sound.

There’s no point in attempting to build up the mystery in a post so far dominated by grease and tardy pedal maintenance. It was the Speedplays.

On close inspection, the pedal was barely able to spin on the spindle.

The added resistance was no doubt helpful in supercharging my training effect, but not ideal if I’m trying not to wear down the pedal bearings.

I rode the remainder of the ride in that state of heightened tension where you’re conscious of the ludicrous noise that is piercing through the otherwise peaceful June countryside evening and the potential damage that each pedal stroke might be making.

(Though this latter fear was mitigated by the knowledge that the amount of power I put through the pedals is unlikely to wear down bearings made of soap.)

It was clear that I had to bite the  bullet and buy a grease gun.

Part of the reason for putting off the act of maintaining the Speedplays for so long is that the cost of the official Speedplay grease gun seemed so prohibitively expensive.

(If you do want to get the official Speedplay grease gun, I think it costs a snifter over £40 (and that is sans a tube of grease), but I suggest you read on first.)

I wasn’t sure whether alternative solutions would work.

The procedure for replacing the internal pedal grease is shown quite clearly in this Speedplay video:

For those that can’t be arsed to watch it, the main elements are that you unscrew a little cover to an aperture on the side of the pedal. You then force new grease into this hole such that the old grease already in there is squeezed out the other side (being the bit around where the spindle goes into the pedal).

Voilà the grease hole, with the small screw: 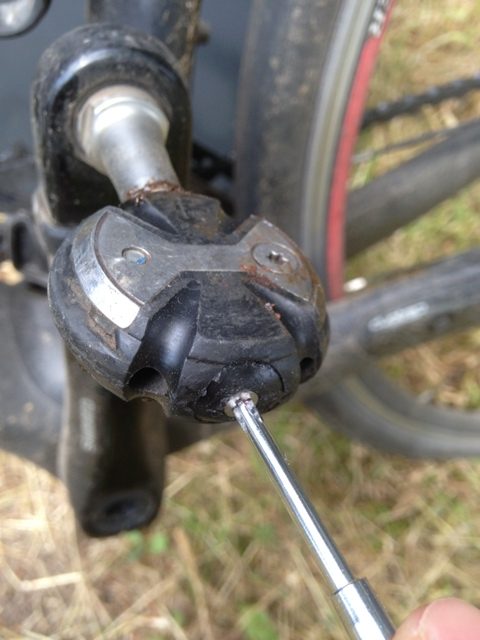 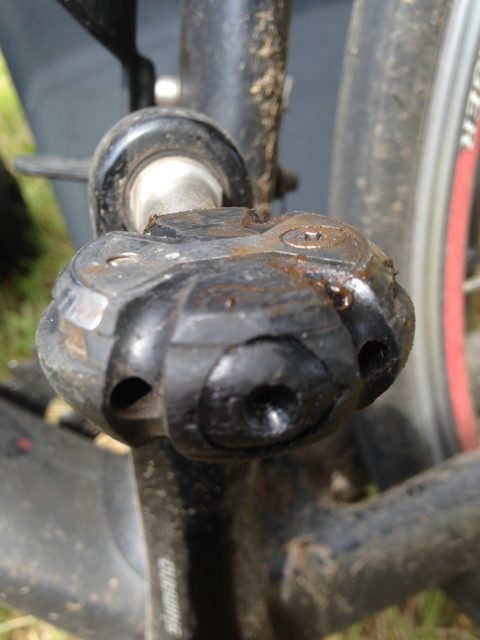 It’s all about getting a good seal between whatever you use to apply the grease and the hole in the pedal (or else we’re talking grease backdraft, and no one wants a greasy backdraft).

It’s difficult to know, simply from t’imternet browsing, what other products might work. I was therefore resigned to paying up that 40 squid for the official Speedplay grease gun.

Then I happened upon this little beauty: 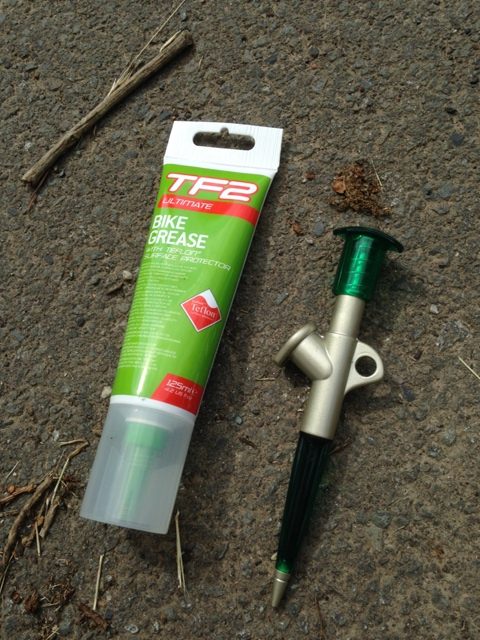 The heavens opened and a shaft of golden light shine down. And it was good.

(Or rather I ordered it using Amazon ‘buy now’ and it turned up in the post a couple of days later).

Pretty simple really. You get a giant green syringe and a tube of grease. Which is red (and which you can replace when it runs out): 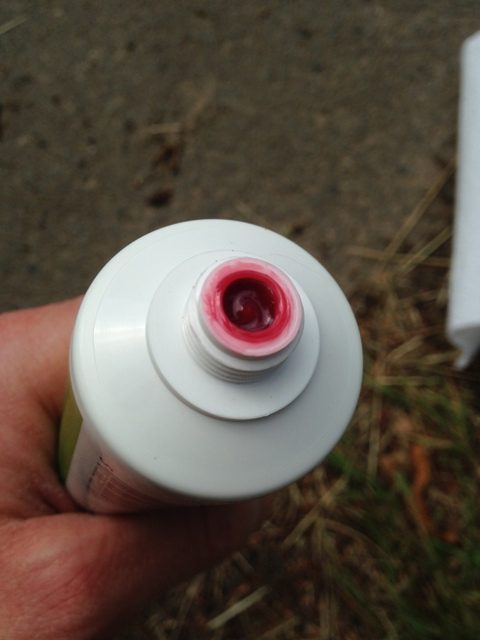 The syringe screws onto to the top of the grease tube. You pump the back of the syringe a couple of times and it starts to force grease out of the nozzle.

So, Does It Work For Speedplay Pedals?

Having removed the little screw that otherwise holds the grease within the pedal, I presented the grease gun to the hole and, er, let it rip. 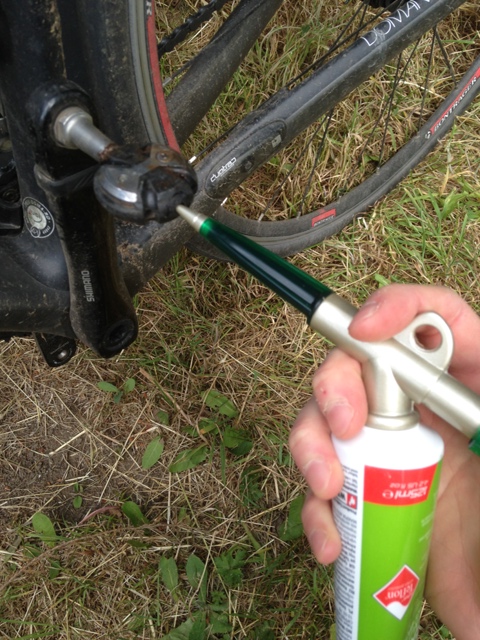 (This photo might be something of an historical re-enactment… I was a bit too focused on greasing rather than photo-ing the first time round).

My main concern was achieving sufficient pressure to force the old grease through the pedal and out the other side. This proved not a problem. 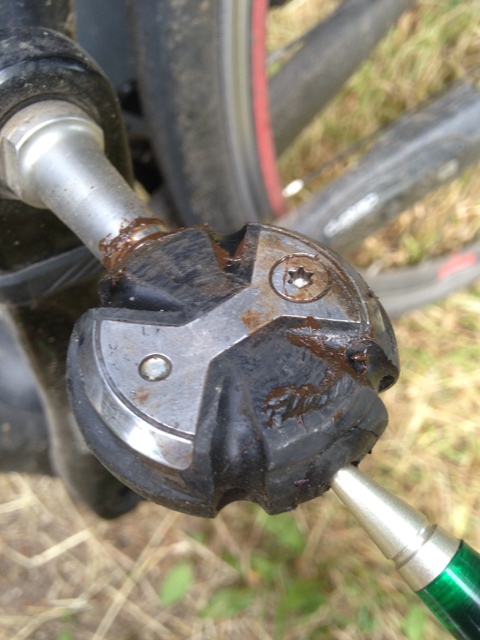 A few pumps with the syringe and a few slow turns of the pedal as the new grease goes in (as per the video instructions above) and the mucky brown grease started appearing around the base of the pedal spindle: 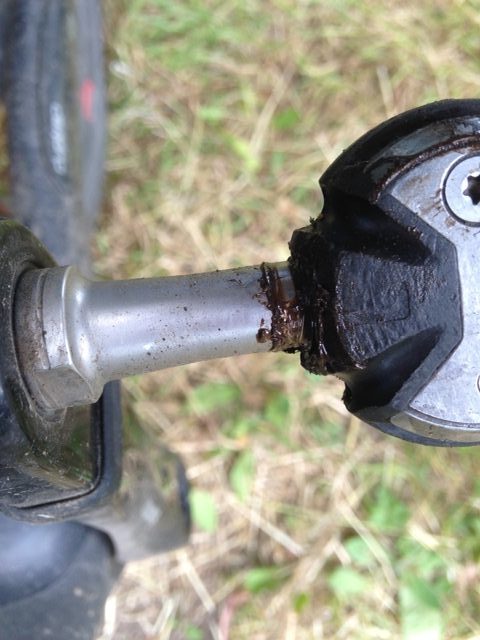 Once the grease being pushed out started to resemble the fresh red grease I was putting in, I deemed the job done. And it appears I was right – the pedals now spin as they’re meant to. There is a pleasant lack of screeching and creaking.

Pro tip: keep plenty of kitchen roll – or your alternative cleaning towel of choice – to mop up the spent grease as it comes out. Even then, I found that more old grease came out on my next couple of rides (hence why it’s still there on these photos, a week after the actual greasing).

You’ll want to keep cleaning off the grease as it comes out – you don’t really want it getting onto the cleats of your shoes, where it will pick up and retain grit.

What Else Can You Grease?

The syringe/gun is suitable for every application of grease where you want a degree of precision.

[Mont racks brain to think of another relevant example]

Well, I do remember greasing  the bearings in my rear hub on my old bike, way back in the mists of time. I guess that it may have been useful to have a grease gun for that (though equally, that may have been one of those grease packing jobs, rather than a grease squeezing one).

If you’re someone that greases brake and gear cables within their housings (there seems to be some debate as to whether you’re meant to), a syringe like this will give you the best chance of getting the lube at least in the general vicinity of the opening of the outer sheath.

And frankly I got so far into grease mode that I was lubing everything in sight.

Speedplay cleats are a bit more straightforward and don’t require a grease gun.

They take a dry lube such that you don’t pick up dirt and grit as you walk on them (which would then abrade the moving parts of the cleat).

I used a small bottle of dry lubricant that I picked up from Halfords a year or so ago (and it was eco friendly, so Halfords claimed): 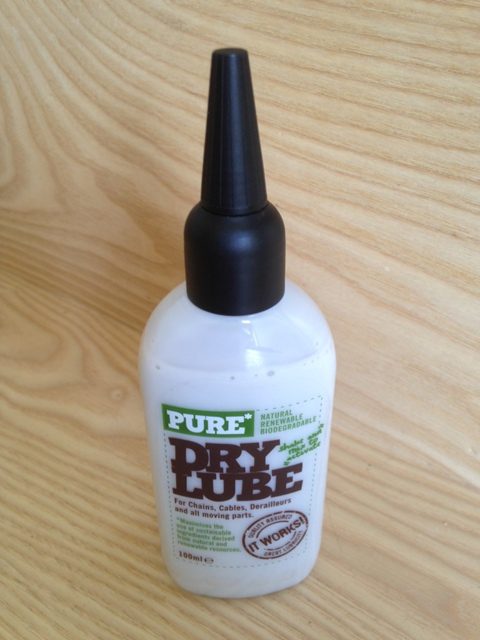 A little dribble of lube all around the inner edge of the cleat (the circular bit that grips the pedal), wipe of the excess, and jobs a good ’un: 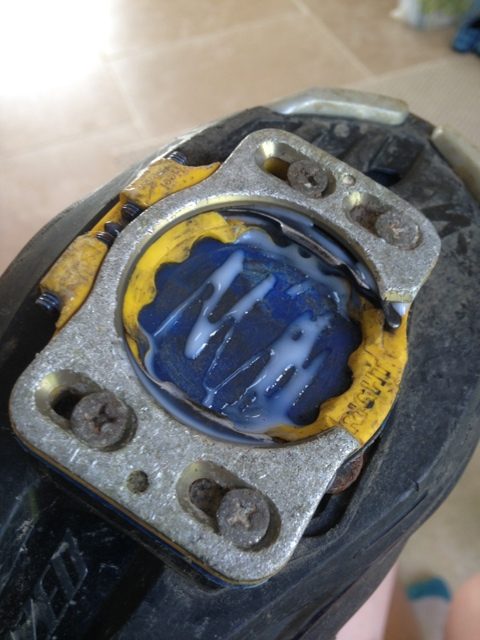 So there we have it.

The Weldtite Teflon grease gun will allow you to maintain (and prolong the life of) your Speedplay pedals at a fraction of the price of the official one. That fraction being ¼ (the gun and tube cost me £10).

I found the Weldtite syringe easy to use. It’s difficult to see what features that Speedplay could add to their version to compel me to pay the difference to upgrade.

I am now on the constant lookout for opportunities where precision greasing will give me a competitive advantage (both in my sporting and newly-resuscitated professional life).

I purchased it from Amazon (UK) and by clicking the link (or image) below, you can too (it’s an affiliate link, so I get a commission if you buy something):

If you’re US-based and you can’t find the Weldtite grease gun on Amazon, then I think Wiggle supplies (try the button below). Alternatively, Finish Line does what looks like an equivalent model (and I’ve always found Finish Line a good lubrication brand):

Finish Line Grease Kit
$18.98
Check price
If you click this link and make a purchase, I earn a commission at no additional cost to you.

Weldtite Grease Gun with 150ml Teflon Grease Check price - Amazon Check price - Wiggle
If you click this link and make a purchase, I earn a commission at no additional cost to you.

Until next time, safe and happy cycling.