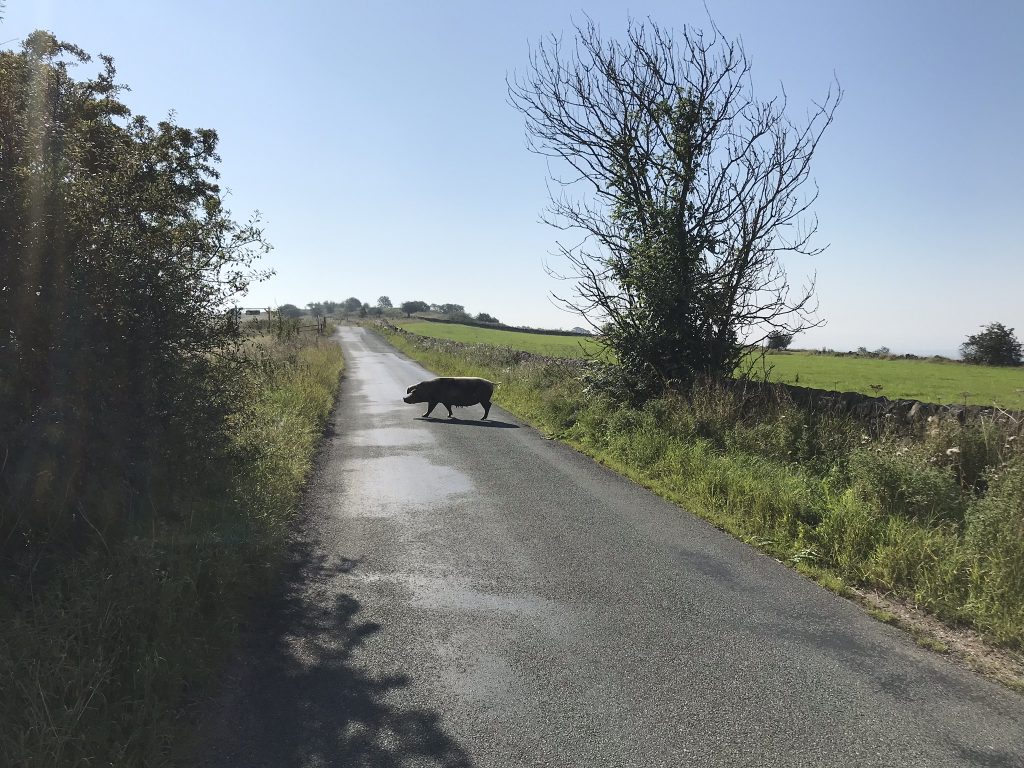 The August bank holiday weekend saw some magnificent weather in the UK. This was a rarity. It also saw Mont brush up his man skills through the lighting of a barbecue (also a rarity).

With the clement riding conditions being well flagged in advance, I took the opportunity to designate the Monday morning as ‘ride time’ in the family calendar.

I would strike out into the Peak District. And this post is an account of that ride.

Quick Plug For The Peak

You really should come riding here.

(‘Here’ being the Peak District in the UK.)

When the weather is playing ball, it’s an awesome place to ride your bike. We’ve got loads of little valleys (and Peaks), cross-crossed by quiet country roads. There are an infinite (more or less) number of routes to suite all abilities, moods (?!) and times available to ride.

It makes me think: in the future I should offer guided rides around my favourite routes, views and climbs.

Ahem. My blog GPS tells me I’m going ‘off route’. Let’s get back to the ride.

Well there wasn’t much.

Which is hardly unusual. For most of my local day-to-day riding, I’m a creature of habit when it comes to route selection.

That said, for a ‘special’ ride like this one, where I’ve ring-fenced a good window of time on the bike, I’ll generally plan a route in order to make the most of it.

This ride started with a portion of my usual local short ride. This included a cheeky little punchy climb where I am reasonably far up the leader board (probably because no one else realises it is a Strava segment).

(Not so) interesting aside: there is a very nice restaurant, The Lighthouse, at the bottom of this climb. Worth trying if you’re visiting (or indeed a local).

Then it was over the A515, taking me from Derbyshire to Staffordshire and towards Rocester. But not before I’d passed through Marston Montgomery. Which, if I’d known about it at the time, would have been my number one name choice for my son (I guess, as Master Montgomery, he’s close…).

Rocester (pronounced ‘roaster’), is the home of JCB. So, from the top of the hill as you approach, the company’s vast world HQ, you get a view of long lines of bright yellow earth moving vehicles, waiting to be shipped out.

The main road from Rocester to Ashbourne, up and over a hill before dropping down to Ellastone can be quite busy. With it being the bank holiday, there were none of the larger trucks heading for the quarries in the Peak and traffic generally was sparse.

The village of Ellastone is a good jumping off points for climbing into the Peak District (it is also home to what looks, from the outside at least, like a very nice pub).

From in and around Ellastone there are a number of climbs up to the higher ground. They all broadly go to the same place (er, up).

I took the main road (not that much of a main road) through Wooton and Ramshorn because I really wanted to ride past the JCB Test Quarry (which I guess is the equivalent of the nurbergring for diggers) as well as going as near as possible to Alton Towers.

Or perhaps I just wanted to go in that direction so I could strike out further into the Peak than usual.

If it’s views you’re after, from the village of Wooton there’s a right turn that takes you up the Weaver Hills. Your reward for conquering some high gradients on narrow lanes (and at least one cattle grid): spectacular views back across Staffordshire.

Once up on the higher ground (albeit not yet in the Peak District national park), I continued north-ish, crossing the somewhat busy (but not really) A52.

Whilst relatively flat (perhaps it’s a plateau?), the main potential issue up there, assuming it’s not raining (or snowing), is wind. It’s pretty exposed.

The Bank Holiday weather gods continued to be kind. The winds were light and always at my back (maybe).

To be honest, this would otherwise be a somewhat boring part of the ride. Nice as the views were, I was still aiming to get somewhere. That said, I did strike out on a left turn that promised a slight incline and some close up views of telecommunications masts.

I lucked out. The road surface was almost continental in smooth-ity and I also won a top rider prize – a close up experience with a pig. Oink!

After a hair-raising descent back to the main road (I wouldn’t fancy these randomly smoooth roads in the wet), it was finally time to turn off (to the right, Links Recht fans) and hit the Peak.

From riding on broadly flat roads, with maybe a slight incline, my day soon turned a lot more uppy-downy. And that’s 13-14% gradient uppy-downy.

The B5053, as you can imagine from its evocative name, is a great Peak District cycling road. It’s worth featuring on a route through the area (hence why I did…).

It doesn’t have any notable climbs as such. It’s just a nice example of the sort of grippy roads with glorious views, in and out of perfectly formed dales, that makes this part of the Peak so attractive.

Whilst I didn’t go further north, this road is did easy to build into a route tackling Crowdecote and other challenging climbs towards Buxton, Bakewell (and beyond…).

I rode the section of the B5053 through Onecote and Warslow before turning off at Hulme End. I had to fight my way through the fug of cooked breakfast smells, created as the local pub attempted to capitalise on the hordes of bank holiday campers re-enacting some sort of humanitarian disaster in the fields.

No one there seemed interested in tackling the prolonged climb from Hulme End to Alstonefield so I was soon back on my own. The ascent was only punctuated by the occasional stop to capture some particularly beautiful hills (?!?) on camera. The Strava KOM was safe…

Contentious as this might sound, the late Dale Winton is not my favourite Dale (international readers may need to Google that one).

Cafes And Toilets (In The White Peak)

The two most important amenities on any long bike ride.

Having not quite got my aris out of the house early enough, I didn’t have time to stop for coffee.

If you are following my route and do want a cafe stop, there a few options. There is a National Trust property at Ilam, which has a cafe. I definitely smelled English breakfasts being cooked at the pub at Hulme End (presumably to serve the large number of campers).

Finally, we have one of this blog’s cafe mainstays, Herberts Tea Rooms in Tissington, which is a short detour from Thorpe.

I doubt you want a detailed insight into my Peak District toileting strategies (I don’t know, maybe you do). It’s always useful to know where decent (free-to-use) toilets are located though.

On this ride I made use of the public toilet facilities at Alstonefield. Whilst bike theft is (I’d imagine) rare in this quiet village, further comfort is provided by the ability to leave your bike out of site of the road, in the covered (but still sort of outdoors) corridor that runs in front of the toilet doors.

If you are in Tissington but not availing yourself of the tea (in the rooms), there is a public WC in the car park for the Tissington trail.

Where Is The Strava Link, Le Mont?

Why funny you should ask, aquí:

At the risk of sounding like a paid member of the Peak District cyclo-tourist board*, this part of the country (and the world) is a wonderful road cycling destination. Sunny August bank holidays show off its attractions (‘to the max’).

The gradients are challenging, the views are splendiforous. The opportunities to get off the beaten track, but not get lost and find yourself too far from civilisation, are multitude. Whilst there is the odd busy road, most routes are quiet.

And whilst we may not have Alpine climbs that stretch for mile after mile, if your object is to fit many metres of grippy ascent into a compact ride (with cafe stops), then the Peak District is hard to beat.

Just watch out for the odd porker.

Have you ridden in the Peak District? Would you like to? What are your favourite routes, climbs and cafes?