Looking for the best and cassette lockring tool for your bike? You’ve come to the right place…  blog… cool service course with hipster cafe. Ahem.

So, you’ve decided to take the next step towards cyclo-service self sufficiency.

You need to take your cassette off the bike, either to clean it or to replace it.

It is one of your core principles that you like to avoid shredding your fingers whilst undertaking bike maintenance.

You therefore need a and a lockring tool.

And in this post we’re going to find out what they are, who sells them and which is the best (or rather, which will do the job with the minimum fuss).

(Note that these links, and those in the rest of the post, are affiliate links. If you click one and buy something, I get a commission. You pay the same price.)

A is one of those tools that you use to commit 1960s-style East London gangland violence. [It isn’t]

A , in the bike context, is a tool that you never knew you needed, until suddenly you did.

You use it prevent the bike cassette turning (those pesky free-wheeling bike hubs…) whilst you untighten the lockring.

Essentially it’s like a long spanner (or wrench, Americanos) with two bits of bike chain attached to the end of the handle that you don’t hold:

Maybe it’s easier to show you a picture – this is my own personal Park Tool chain whip: 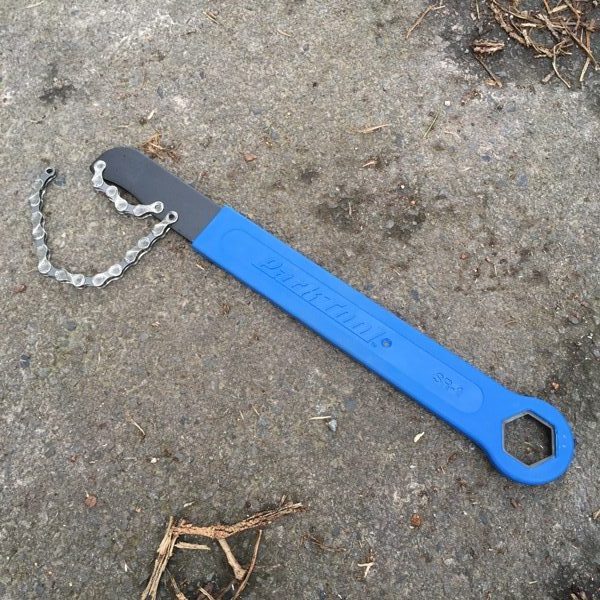 Okay. But What’s A Cassette Lockring?

I knew you were going to ask that.

Well, you know how the individual cogs of the cassette slide onto the freehub body? The cassette lockring is the final ‘bit’ (Wikipedia describes it as a threaded washer) that goes on after the smallest sprocket in the cassette, in order to hold it all in place.

Here is an example of a (somewhat bling) lockring: 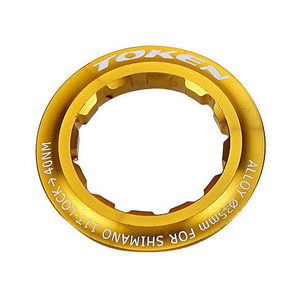 The point is that in order to untighten the lockring, you need to hold the cassette in place and prevent it turning. That’s where the comes in.

Half Job, Half Biscuit

Like many a young person (yes, I said young), I have been accused by elder mechno-statesmen (generally related to me) of only doing half a job.

Well, I’m here to tell you that the revels in only doing half a job. You only use it to hold the cassette in place whilst you untighten the lockring. It is rendered superfluous for all your lockring tightening needs by the design of the freehub.

The cassette doesn’t rotate in that direction without the wheel doing the same (and I’m assuming you can hold the wheel steady without the need for a specialist tool*).

(* Unless you are the specialist tool.)

Tsk, you spend all that money (well, a modest amount of money) on a and it gets used, for all of about a second, a few times a year. It does make you look (and feel?) quite pro to have one in your bike tool kit though…

Important note: there are other lockrings on bikes, for instance at the bottom bracket and on the headset.

If you’re a-Googling, or a-shopping, make sure you’re looking for a ‘cassette lockring’, and don’t accidentally buy a bottom bracket lockring tool, like this one: A cassette lockring tool tends to be a full circle and sort of looks like a tool for tightening the nuts on your car wheel. Like this one (which is mine) – this has the tool built into a handle: 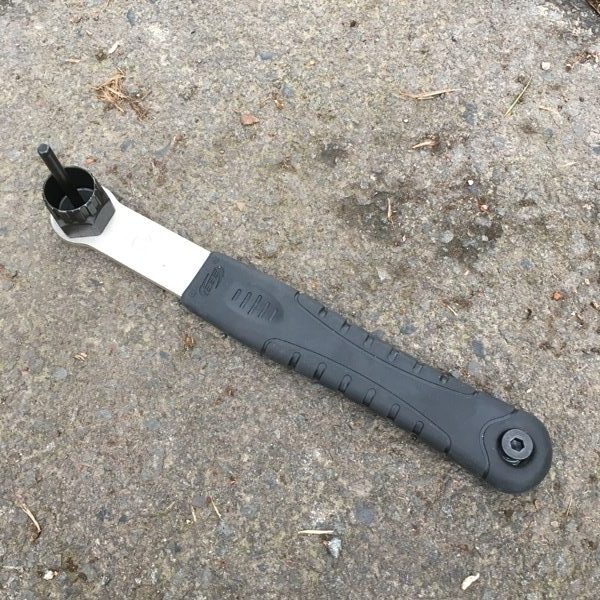 You can also buy just the end bit and have it slot into an existing handle you might already have: How To Look Like A Legend With Bike Tools 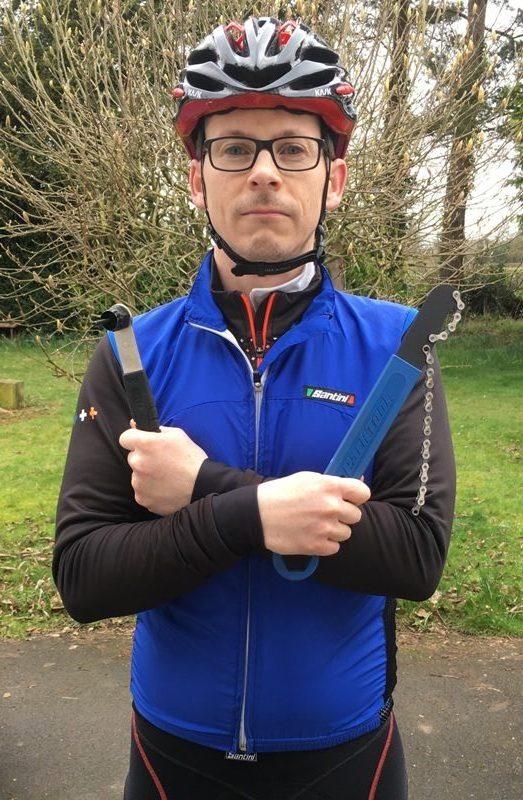 Who Makes And Lockring Tools?

Okay… well, the classic go-to response for any question about bike tools is to go straight to the true blue of Park Tools. Or it certainly used to be.

Until fairly recently, Park Tool seemed to have things very easy. They had the quality bike tool market almost to themselves. The distinctive blue handles could be seen in almost every tour of a pro-team mechanic’s workshop.

There are now other quality bike tools available.

Other manufacturers that I’d be investigating in addition to Park Tool:

Indeed, I will investigate them, as they’re all about to feature in a table of the different chain whips and lockring tools available, at the bottom of this post.

Are There Alternatives To A ?

I suppose you could put on some heavy duty gloves, perhaps wrap a rag around the cassette, and try to hold the cassette in place with your hand.

Not sure I’d recommend that though.

Notwithstanding the blood poisoning that you’ll endure after lacerating your fingers with oily cassette teeth, the attraction of a is that it has a long handle.

The effort required to exert force on the cassette (i.e. to hold it in place) is less because, er, physicky physics (distance from the fulcrum, phsst).

A more viable alternative would be a set of . Park Tool (them again), I think, introduced them. Now LifeLine do their own version as well.

Given what you know about how chain whips work (i.e. the ‘whip’ grips the cassette teeth, allowing you to hold it in place without it turning), I think you can probably work out how function.

There are no alternatives to begging, buying or borrowing (or pilfering) a lockring tool if you want to remove a lockring…

The main thing to be aware of when buying a (or pliers) is making sure the tool you’re buying is suitable for the width of chain you run. It will will generally say in the description (or you can ask at the shop).

The ‘SR12’ is suitable for 5- to 12- speed cassettes. The hexagonal hole (technical term) means that you can use the SR12 as a wrench, with tool fittings. You could therefore use it with a lock ring tool (see below), which is fine for when you’re tightening the lock ring, but of no use at all when you’re loosening it (unless I’m missing something, you can’t be using it as both a and a wrench, all at the same time).

Watch out for the SR1, which is stated as being suitable for 5- to 10-speed cassettes. Probably safest to get the SR11 if you’re in any doubt, since it covers the full range of cassette sizes. Also, beware of the SR18 (red label on the handle) – this is for fixed gear sprockets (track bikes dinna have cassettes, see…).

The BBB Turntable is targeted at the value end of the spectrum (based on the very reasonable price). I’m sure it’ll do the job though. My cassette lockring tool is made by BBB (see below) and I’ve been very happy with it.

If you like your tools with a tactile wooden handle, then Lezyne has just the for you.

That ‘nobbly bit’ on the metal end (on the side where the chain isn’t) is a lockring tool. I’ll be honest though, I’m not sure what sort of lockring it is used for – unless I’m missing something, it won’t work on your standard Shimano or Campag cassette lockring. 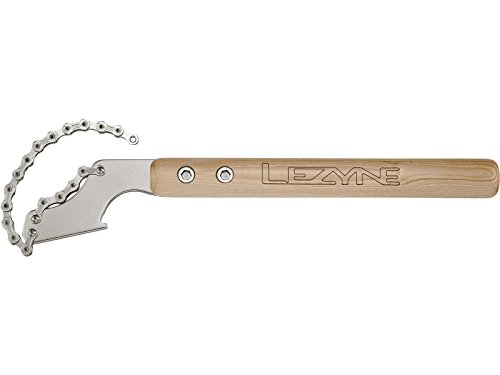 Similar to your Classic Lezyne, but designed for the cyclist that likes to feel cold steel in the palm of their hand (or aluminium, which is what the handle is actually made of). 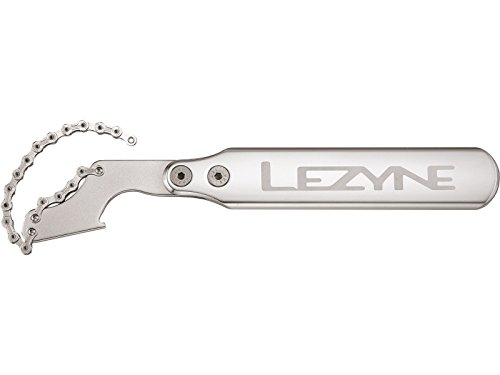 You can probably work out how these do essentially the same job as a , just in a slightly different way.

Rather than have a longer bit of chain that gets wrapped around the cassette to secure it in place, you have two fixed pieces of chain attached to the end of a set of pliers. You hold the cassette in place by using them like a set of… pliers…

The obvious (from the photos) consideration is whether you go for a tool with a handle or one without. It you already have a suitable wrench, then the handleless version will save you space in the tool box.

The less obvious consideration is that you’ll need a lockring tool that fits your lockring. The splines on a Shimano cassette hub are different from those on a Campagnolo version. You just need to spend a few moments checking the specifications to make sure the tool in question is compatible with your gears…

Suitable for Shimano and SRAM 12-spline cassette hubs. The handle is replaceable in case you wear out the lockring tool itself (!)…

And here is just the tool bit. You’ll need to find your own handle (i.e. use a big wrench). If you lack a handle/big wrench, and you need a anyway, the Park Tool one has a hole in the handle that fits the lockring tool (if that doesn’t make sense, just look at the photos). 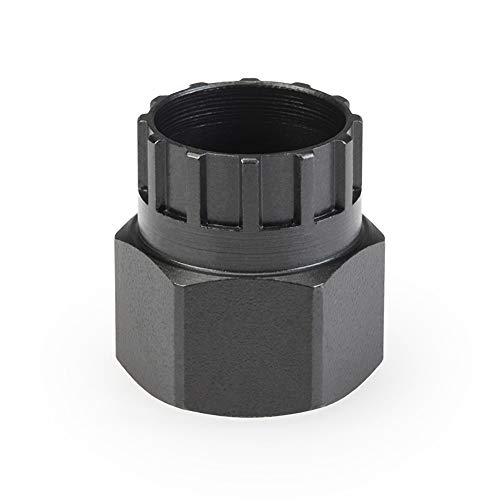 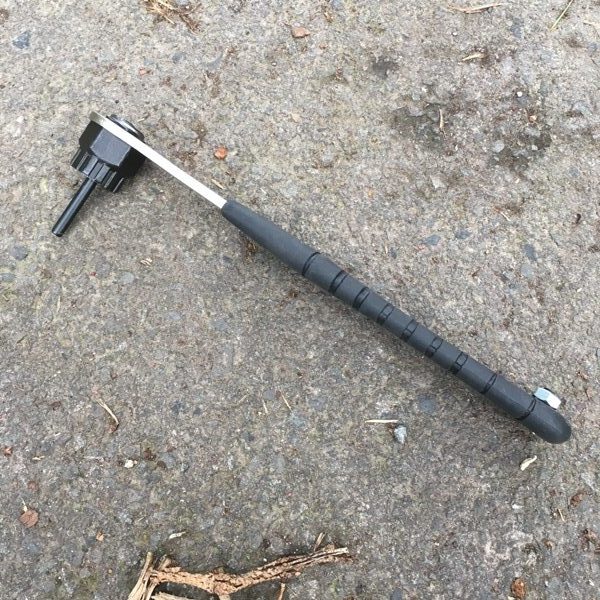 I have this one (hence my driveway featuring as the backdrop to the foto…).

It’s always done the job when asked (and I do talk to my tools…).

Make sure you select the right one for your cassette (i.e. Shimano or Campagnolo).

Similar to the Campag tool above (it works on bottom brackets as well), other than here there are two tools attached back to back (one tool for cassette; one for BB). Useful for saving space and reducing the number of tools you have knocking around.

The bottom bracket tool fits “most external style BBs”, including Shimano, SRAM, Campagnolo and FSA, so quite a flexible option. 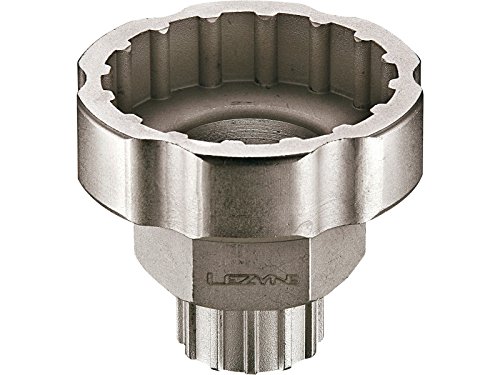 Despite using my own and cassette lockring tool pretty infrequently, I’m always pleased when I do. Something about the satisfaction of owning the right tools allowing you to the job right.

If you’re in the market for one or both tools (or anything bike related), I hope you have found this post useful.