I’ve bust my saddle bag. Which is a bit of an (under) arse (storage issue).

So, since I’m researching my buying options for its replacement, I thought I’d write a post to share my findings.

To be clear, I’ve not seen any of the following bags in the flesh (or if I have, they’ve been in the background to other bike shop adventures). I’m not able to provide you with a hands on review.

Instead, this is something of a meta-analysis (a systematic review; a hedge fund of funds). In other words, I’m going to surf the internet, looking at saddle bags, choose and buy one and then report back.

What Is A Saddle Bag?

So a saddle bag is the little (though sometimes quite large) sack that dangles beneath your saddle, generally attached to the seat post. A dangle sack.

Frowned on by cycling purists*, who point to the perfectly adequate set of pockets on the back of your jersey, you generally use your saddle bag to store a spare inner tube, tyre levers, a multi-tool, maybe an energy gel, a brace of jelly babies and a small pork pie.

(* Luckily I’m not a cycling purist, and neither are you. Are you?)

What I’m Looking For In My New Saddle Bag

I’d say that my main considerations in choosing which saddle sack to plump for are:

Once I’ve been through this analysis, I’m going to push the button on the purchase – there’s no point in delaying when you have a lack of sack.

If you’re in the market for a new saddle bag then you we can all purchase together, creating a strange demand spike for under seat storage that will have retail analysts a-guessing and a-theorising.

Actually, on that point, some of the links in this post are affiliate links. If you click through and buy summat, I might get a small cut (depending on the vagaries of their record-keeping systems). You’ll pay exactly the same price.

If you do reward me in this way, you get the warm karmic glow (perhaps in your dangle sack) that you’re helping support the site and the costs associated with it (who am I kidding – you’re helping me pay for this fugging saddle bag).

Gladiators, READY! (Here are the bags am I considering…) 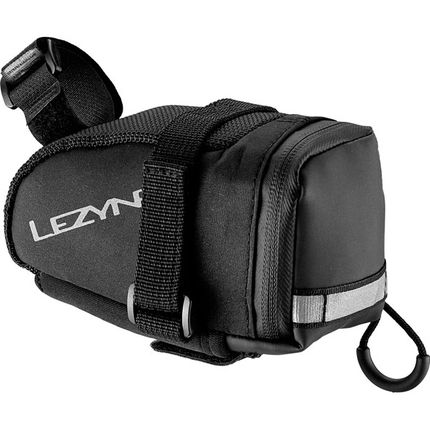 The Lezyne Caddy is similar to the bag I own. It has velcro straps that fit around the seat post and the ‘under-saddle bars’ (I’ve no idea if this is the right term).

According to reviews, it is on the smaller side of medium, but can nonetheless carry two spare inner tubes, a multi-tool, chain tool and some tyre levers, as well as cash and keys. It is split into two compartments, allowing you to keep items apart from one another if you need to (I often wonder if having a multi-tool knocking around with the inner tubes is a good idea). At ~£16, it seems like a solid piece of gear at a reasonable price.

Lezyne also do a (‘semi-rigid’) bag that attaches to the under-saddle bars (ah, I just read, they’re called seat rails). It does like quite nice. 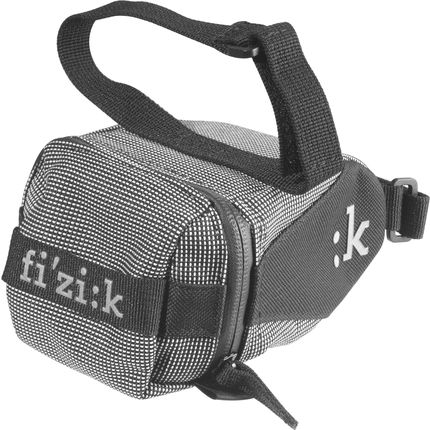 The PA:K is £5 cheaper than the Lezyne Caddy. The saving appears to be down to having fewer velcro straps (2). Looking at the reviews on the Wiggle site, purchasers of the PA:K appear to be obsessed with what they can (or cannot) fit into it. Based on their comments, it is either massive or only just big enough. I can only conclude that it’s made of the same stuff as the TARDIS (or people have radically different views on how much a saddle bag should be able to carry).

If you’re interested in the PA:K make sure that if you buy the version without the velcro straps (called the Fizik PA:K ICS*) you have a Fizik saddle that you can attach it to. As far as I can work out, this is not a bag that you can fit to any old saddle (it has to be a Fizik saddle).

* ICS stands for ‘Integral Clip In System’, which gives you a clue why you need a compatible Fizik saddle. Also, I added in the ‘*’. That’s not the Fizik people going punctuation crazy – ‘punct drunk’ – again. 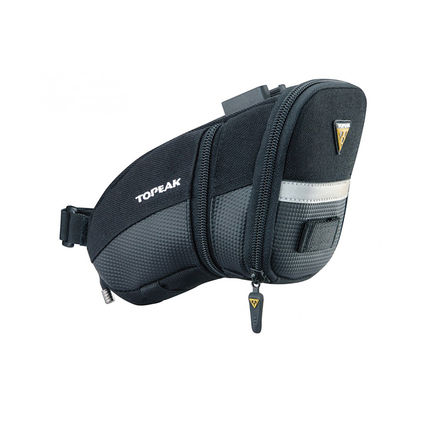 Topeak have chosen to name their saddle bag after the classification of wedgie that occurs just before you move up to an uber-wedgie.

It also conveys a sense of aerodynamic advantage, due to it’s sleek (their word) wedge shape.

Enough cynicism. The Aerowedge comes in a number of varieties, attaching to the bike via the standard velcro method or by using Topeak’s ‘QuickClick’ bracket attached under the saddle (which still involves a velcro strap around the seat post).

What I like about the Topeak is that the medium is extendible (as are some of the other sizes). Unzip le zip and the bag capacity increases by 30%. The QuickClick mounting kaboodle also looks quite neat. Finally, if you’re an underwater cyclist, Topeak do a full waterproof version, with those foldover ‘roll closures’ that you see on North Face mountain rucksacks (and some bike panniers). 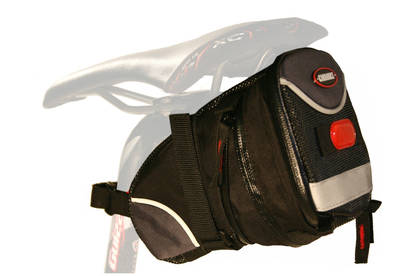 Now if I was in charge of this country, we’d all be using a Carradice Nelson longflap saddle bag. Thankfully I am not ruling the country.

Actually, I hadn’t heard of Carradice until I read an article on London Cyclist whilst researching this post. After initially not including Carradice in his short list, Andreas was forced to relent after a full-scale revolt in the comments section.

Whilst attractive and dripping with cool (in my warped mind), the majority of Carradice options are not what I’m looking for in a saddle bag (i.e. for training rides and sportive participation). That is, other than the CarraDura Midi Saddlepack (pictured). This one is made of ‘modern fibres’ (i.e. the same sort of stuff that the Lezyne, Topeak and everyone else uses) and comes in at a very reasonable £11.70 (currently). Or rather it would, if it wasn’t currently out of stock at Evans (May 2014).

As an alternative, you can go for the ultra grande ‘Super Midi’, which appears to be able to accommodate a mini-pump, a snack and a Goretex jacket, in addition to the usual puncture-repairing suspects. Or you could buy the Midi direct from Carradice, pay an extra £1.30 and avoid using one of my affiliate links (hey, it’s your karma, pal).

So What Am I Going To Buy?

To be honest, all of these bags seem to be reasonably similar. They’re all grey.

In the absence of purchasing an old-school Carradice affair (which I can’t quite justify), I am going for…. [drumroll]…. [sausage roll]… the Topeak Aero Wedge Medium in a ‘clip on’ format.

It’s extendible or shrinkable (depending on your starting point); I fancy trying an under-saddle clip (my last saddle sack used straps); it scores a marginally higher average rating from Wiggle purchasers (4.3/5 currently, versus 4.1 and 4 for the Lezyne and Fizik, respectively).

With that done, I’m now off to trademark the name ‘Dangle Sacks’ for my new (to-be-designed) range of premium under-saddle storage accessories…

Whilst you’re waiting for those to come out, do consider subscribing to the Sportive Cyclist by email. You’ll learn how to squeeze the best sort of training into the smallest amounts of time, how to conquer the hills, how to shift the extra tyre. Enter your email address in the box below this post or, if you need more convincing, click here.