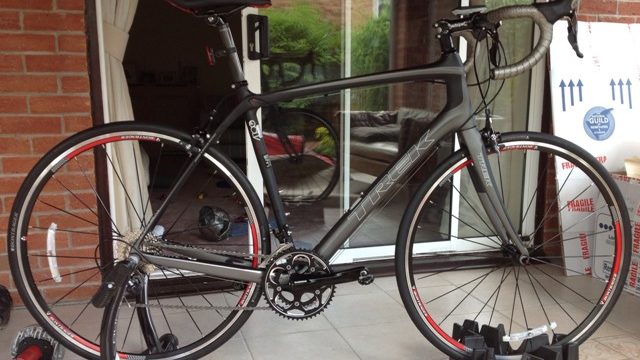 After much talk of potential new bikes and having a bike fit, I’ve finally got round to taking some positive action. Ooo-rah!

If you’ve been following this blog for a while, you’ll know that my training efforts have been hampered by a recurring knee injury (and a general lack of structure, focus, etc).

I knew that part of the solution would be to get a proper bike fit, but had shown a distinct lack of motivation to go ahead and book one.

The straw that broke the camel’s back was some straight-talking tough love from the readers of my last post, which essentially boiled down to:

I followed that advice to the letter. And then bought a bike as well. . Hurrah!

The whole process was actually quite involved, as you’ll see, but I wanted to get it all sorted before we go on holiday next week (to our Majorcan training camp – more on that in another post).

On the basis that I wanted the fit to be as effective as possible, I elected to go for the full-on video analysis provided by a Retul bike fitting. I booked an appointment with Andy from Bike Science Derby for a ‘3D Dynamic Fit’. Motion sensors would used to measure all the necessary angles and ranges of movement, allowing tweaks to be made to my position on the bike.

We didn’t get beyond the initial static assessment. It turns out that my trusty Dawes Giro is far too long for me. My back angle was down at 40 degrees – an aggressive racing position is something like 43 degrees. For my sportive objectives, an appropriate angle would be 48 degrees.

Andy suggested that we not proceed to the full Retul fit with this bike. We would never get anywhere near the point where the precision measurements from the 3D motion capture would be of any use.

Instead, he swapped out the handlebars and stem for shorter versions of each, and succeeded in raising the back angle to a much more comfortable 43 degrees (at least compared to what I was used to). The noble Dawes will hereby be relegated to the status of ‘occassional winter bike’, which it won’t like.

It was clear that I needed a new bike – and I now had the killer argument to persuade my wife that a new bike was no longer just a desire, but a necessity.

In Search Of A New Bike

My bike fit had transmogrified into a sales consultation, so I was led to the jig at the front of the shop (Andy does his bike fits from his shop, (be)spoke Derby). (be)spoke stock Boardman, Kuota and Avanti bikes.

I would have been tempted by a Boardman, but for my dimensions (and for most other people as well), their geometry is more suited to racing than sportive riding.

This left the Kuota, which in my price range was the Kharma Evo, and a New Zealand brand that was new to the shop, and to the UK as a whole, Avanti. In style terms, the Kharma looks like the offspring of a marriage between a 1990s Ford Fiesta XR2i and a triathlon/time-trial bike. I’m afraid it isn’t for me.

The Avanti Cadent ERII 2.0 (such long, complicated names…) looked much more appealing but I knew nothing about the company or the bike itself. Since it was prior to the brand’s launch at the shop, there wasn’t one to see in the flesh.

For a charge (essentially, the cost of the fitting), (be)spoke will advise you on other bikes that are a suitable size, which they themselves do not supply. I opted to pay for this on that basis that it would either be knocked off the cost of the Retul bike fit or the Avanti (if I ended up going for it).

This process was interesting – whilst I’ve read bike reviews aplenty, I’ve never seen bike compared directly, based on my specific measurements. It became clear quite how many bikes that I might otherwise be tempted by are simply not suitable for me. This is a lesson that I think every semi-serious cyclist needs to learn.

For my ‘stack’ and ‘reach’, and my desire for a ‘sportive’ frame, the appropriate bikes for me, in addition to the Kuota Kharma and the Aventi Cadent, were:

I was also told my correct size for each frame, which I won’t bore you with, other than to say the following. I am somewhere between 5ft 9in and 5ft 10in in height. I am not a particularly big man. The right-sized Focus for me was an ‘XL’ and the Domane 58cm frame (my size) is listed on the Evans website as being suitable for someone 6ft and taller. Manufacturer frame sizes simply don’t give you the information to make an informed decision as to which one you personally need, so get fitted up properly (though not in the ’60s East End gangster sense).

I went home and did my research. I even made a (relatively) pretty spreadsheet where I compared prices, groupsets and supplied wheels. I read reviews.

You probably don’t need to hear more about that mental process other than to say, I was swayed by the claims of one bike that it would provide unrivalled comfort (via a seat post that is ‘decoupled’ from the rest of the frame) and would turn me into Fabian Cancellara*.

(*If there is one cyclist that I am least like in almost all physical and mental attributes it would be Fabian Cancellara, so this is quite a claim.)

I’m sure the suspenders are killing you, so I’ll put you out of your misery.

I am now the proud owner of a gleaming (insofar as a grey matte finish can gleam) Trek Domane 4.3. It has Shimano 105 shifters, and front and rear mech, with a Tiagra cassette (which I’m fine with, since it gives me a 30 ring) and a similar spec R565 compact crankset.

I’m looking foward to seeing whether the 34/30 ratio allows me to ‘spin’ up climbs rather than employ my pained waddle dance (waddle as in duck, rather than Waddle as in footballer).

I’m sure I will have more to say about my new steed in future, so I’ll leave it there for now.

(And yes, the more eagle-eyed of you will have spotted that this is not the custom-made, steel-framed beauty that I seemed to favour in previous ‘I want a new bike’ posts. I’ll probably do a post on the reasons for my choice in the future).

Support Your LBS (Even If One Of Them Is Massive)

I bought the Domane from Samways, another bike shop in Derby. Despite being massive, with a sizeable internet business, it has a long history in Derby and I believe it is still family owned. It had both sizes of the Domane that would fit me in stock and it felt good to support another local bike shop.

I also bought a new pair of bike shoes. I went for the Specialized Elite Road Shoes primarily because I’ve been happy with my mountain bike shoes from the same company and they felt like they had a similar fit.

Serendipitously (yes, I did just use that word), I’ve since discovered that Specialized shoes have a lot of arch support. As the proud bearer of two rather flat feet, having good arch support is an important factor in attempting to resolve my knee issues.

Under The Flamme Rouge

This post is starting to turn into a bit of a monster, so I’ll call a halt to proceedings here whilst we all have a rest day.

At the end of the Stage 1, the situation is as follows:

Join us next time to find out whether the Grimpeur will get his much-heralded Retul bike fit, whether he’ll be able to achieve that all-important 48 degree back angle and, most importantly, whether all this expense manages to sort out his fugging knee.

You’ve been watching Have I Got Knees For You. I’ve been Grimpeur Heureux. Goodnight.