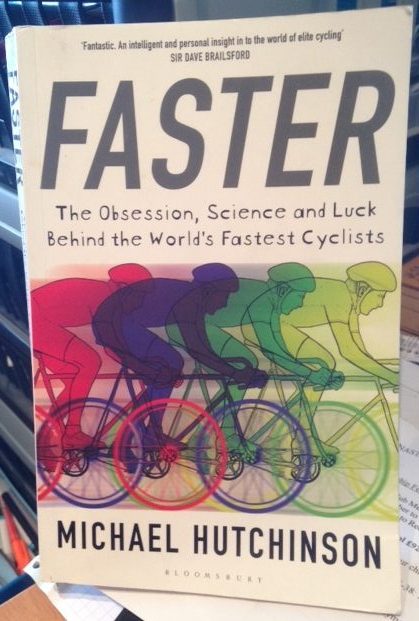 Hello and welcome to the Newsnight Review. I’m Kirsty Wark.

I jest. But I am wearing women’s clothes.

This is a slightly new feature on Sportive Cyclist. I’m going to review a book. You’ll be pleased to hear that it’s a book about cycling.

At the same time as scribing my first book review, I am dee-lighted to announce the Sportive Cyclist Book Club.

This is a rather grand way of describing a new page on the site, dedicated to recommending cycling books that I have either enjoyed or learnt a lot from (or, in many cases, both).

You’re a cerebral bunch here at SC. I imagine you like books (I do) so I wanted to present you with a curated list of my favourites. Perfect for adding to your Amazon wishlist, or for suggesting to your spouse/partner/children/Father Christmas ahead of the festive season (bah, humbug).

Fine, And That Book Review?

This past week I have mostly been reading ‘Faster’ by Michael Hutchinson.

Hutchinson is another cerebral cyclist (like you guys), with a law degree (and a PhD) from Cambridge. As ‘Dr Hutch’, he writes a column for Cycling Weekly.

In his cycling career, primarily as a time trialist, Hutchinson won numerous national titles, as well as represented Northern Ireland in the Commonwealth Games.

‘Faster’ is an account of the various aspects of cycling performance that the author has explored in his career-long quest to eke out every last gobbet of speed from his body and from his bike.

A Technical Book, Written In An Accessible Style

Underpinned by Michael’s experience on the national time trial scene, and on the periphery of the British Cycling world class performance programme (which he never quite broke into), the book also draws from interviews with BC/Team Sky gliterati, professional cyclists, aerodynamics experts, and sports psychologists.

The book covers a range of subjects:

The book covers a range of subjects that I find interesting and it is well-written. Hardly a great surprise then that I enjoyed it immensely.

A lot of the topics are generally familiar to me (I’ve read a lot of books…). Physiology and training are subjects I’ve studied extensively. Hutchinson covers them in an engaging way, using himself as the guinea pig. The book added to my understanding (though whether I’m in a position to implement much of the knowledge is a different question).

Ultimately, Hutchinson never made it to the upper echelons of the sport. His physiological advantages (a massive VO2 max; 50% more blood in his system than the average bear) didn’t translate directly into uber-elite performance. National championships didn’t become Olympic glory.

Whilst this likely proved frustrating to Hutchinson in the early days of his career, experience has led him to adopt a wistful sense of what might have been. The book is all the better for it.

‘Faster’ differs from the sorts of autobiographical account written by other current or former pro cyclists, often with the help of a co-author. It’s organised thematically rather than chronologically, with Hutchinson’s experiences and anecdotes drawn from across his career, to support the points he makes.

More than that, his intimate knowledge of (and love for) the sport comes through in the text. Explanations of (at times) complex concepts, dotted with humour and unusual similes, are clearly coming directly from the cyclist, rather than being translated by a ghost writer with less en-cycle-paedic knowledge.

If you’re interesting in the science of cycling performance, but would rather it were told through the lens of personal experience, rather than in the form of a training handbook or a science textbook, then this is the book for you. If you’d like to give it a whirl, here is the Amazon link again. Faster: The Obsession, Science and Luck Behind the World's Fastest Cyclists

If you’d like to see more cycling books that I’ve enjoyed, and would recommend, head over to my post on the best cycling books. Let me know what you think, and if there are any books I should read and add to the list.