It’s been rather quiet of late on this here website.

Cobwebs have gathered between my typing fingertips.

Mould is threatening to bloom upon my padded gusset (too much?).

(Oh right, you didn’t notice I’d been away? Fine…)

I’ll Humour You. Where Have You Been?

I’ve not been anywhere as such. Instead I’ve been consumed with doing up our new house.

Ever since moving to Derbyshire in 2013, we’ve been renting a house in Ashbourne. In late 2013 we bought a house which was ‘in need of modernisation’.

Said modernisation, which included knocking down, building up, putting in steels, insulating, new windows, new roof (eek), plastering, required my full-time attention from the end of November until, er, now.

(I hasten to add that most of the work listed above was done by professionals – my contribution has mainly been in the form of kitchen installation, tiling and painting).

We finally moved in to our new house at the end of January. And now we’ve got an internet connection. So I’m back to bothering you.

And This Is All Relevant To Cycling, How?

Other than that our house is slap bang on Route 68 of the National Cycle Network, between Derby and the Peak District. Every day cyclists ride past the front of our house. 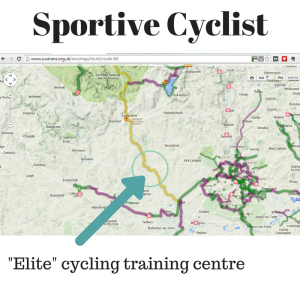 I have an ill-conceived plan to block the road and direct cyclists around our drive – but not before I’ve sold them a coffee and a piece of cake*.

(* This time next year, Rodders, we’ll be millionaires…)

(I have an even more ill-conceived plan to build a series of yurts in our garden for cyclo-touristes to rent out).

Well, my intention is to get back into the habit of writing more frequently. About subjects of interest. Cycling probably.

In the meantime, whilst I (bike) rack my brains for writing inspiration, I thought I’d give you a little insight into the Sportive Cyclist blog in 2014.

That’s like the population of…. er, Luton (guess! *Googles frantically* Hull! More than the number of people that live in Hull!).

So What Were They (You?) Reading?

If we take number of pageviews as a measure of popularity (albeit an imperfect one), the top 5 posts for 2014 were as follows:

1. MapMyRide vs Strava: A Detailed Comparison

3. Strava vs MapMyRide: Which Is The Best Cycling App?

4. Hybrid vs Road Bike: What Is The Difference? (And Can I Use A Hybrid For A Sportive?!)

5. Leith Hill Cycling: Gradient, Elevation, Maps and All That Fandango

If we look at how long people tend to spend reading a post, a few more articles enter the fray:

The Time-Starved Cyclist: How To Train When You’ve Got No Time

The Ultimate Guide To Pedals For Sportive Cyclists

How To Achieve Your Cycling Racing Weight (Without Starving Yourself)

I really enjoyed writing the series about weight loss (inspired and informed by the excellent Racing Weight book by Matt Fitzgerald), so if you only feel like clicking one of the links above, make it the last one.

A rather lovely (and again, frankly disturbing) 1,949 of you have consented to have me email you each time a new post goes live.

My aim is to help all 1,949 of you (plus everyone else that reads the Sportive Cyclist blog) attack your 2015 cycling goals with verve and aplomb (and not a little cochon d’Inde).

Until next time, adieu and safe cycling!