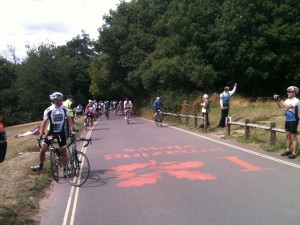 This post is going to discuss Box Hill, the doyenne of the south-east cycling ‘scene’. All the cool cats are climbing up it. You dig?

The format mimics that of a similar post that I wrote about Box’s uncouth RideLondon cousin, Leith Hill. Both posts relate back to one of the most popular articles on the Sportive Cyclist site – my ‘analysis’ of the RideLondon route.

*** If you found this post because you’re looking for information about the RideLondon 100 sportive, then you might like to check out the RideLondon section of this blog – all my RideLondon posts (route, experience on the day, etc) all in one place – click here to take a look ***


I wanted to produce more detailed descriptions of Leith and Box, both for cyclists looking to tackle them on an informal weekend ride and for those riders that would ascend them in the intense athletic cauldron that is RideLondon.

I wanted to do that, so I did do that. Capisce? (which is the correct spelling)

In a future episode I’ll maybe even have a butchers at the not-quite-a-hill-until-RideLondon-decided-it-was, Newlands Corner (I can tell you’re salivating already).

Where Is Box Hill?

Just down the road from Leith Hill as it happens. It’s a (right) touch closer to London, just north of Dorking, along the A24 London Road.

The A24 is a busy dual carriageway. If you have a fair pair of swingers (to quote a certain small Tasmanian super-domestique), you can ride on the road (either from Dorking to the south or Leatherhead to the north).

If your swingers are of more normal proportion, there is a perfectly adequate bike lane separate from the road – there’s even an underpass that brings you out on the correct side of the roundabout that marks the base of the Box Hill climb.

How Do I Get There?

Box Hill is ‘cyclable’ (which may or may not be a word) from central London. However, the route features some busy roads, even when you miss the busy arterial thoroughfares.

Unlike south-east London, which has plenty of quiet cycling within the M25, south-west London cyclists have to put up with a greater spread of suburbia. For choice, I’d recommend getting a train out to somewhere like Dorking (or Leatherhead, Guildford etc) before commencing a route entirely within the Surrey countryside. Then get the train back. Easy.

If you’re of a motorvehicle driving persuasion (and particularly if you’re a member), there is a National Trust car park on Box Hill. And National Trust = Cake.

For a bit more on traveling to the area and a suggested route that takes in other climbs in the area, take a look at the ‘How Do I Get There’ section of the Leith Hill post.

Route Of The Box Hill Climb

Unlike some hills that can be approached from either direction, there is only one way to climb Box Hill, and that is from the west, up the Zig Zag Road.

This is going to sound strange, but the Zig Zag Road is in fact a straight, steep ramp from the turn off Old London Road to the National Trust tea shop at the top.

Or rather, it is not: 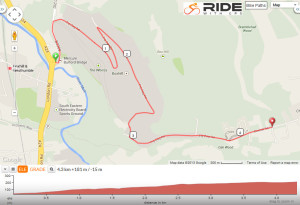 For the sake of argument, I’m going to treat the ‘Box Hill climb’ as being from the roundabout with the A24 at the bottom to the highest point reached by the road. This occurs in a stretch of woodland approximately 1.2 km beyond the viewpoint that looks southwards across the Surrey countryside.

If you’re looking for visual clues, the ‘top’ of the climb occurs somewhere between a post box on the left and a drive on the right with a yellow sign for ‘Brockholm Warren’.

For a popular version of the segment on Strava, ridden by over 13,600 people, try Box Hill (Roundabout to Summit (post box)). The RideWithGPS link to the route shown in the map above is here.

The Numbers That Matter: Height, Length and Gradient

The Box Hill climb finishes some 171 metres higher than when you started. This is already 20 metres ‘more climbing’ than for Leith Hill. In fact there is even more than that.

There are a couple of small descents, the main one occuring once you’ve passed the viewpoint at the top (and therefore conquered the main part of the climbing).

In total there are 204 metres of elevation gain.

Of course, the height gain on Box Hill is spread out over a much longer distance than Leith Hill. At 4.3km it’s just over twice as long.

Thus, the ‘fear factor’ of Box Hill (calculated using a highly complex and barely understood algorithm) is lower than that of Leith.

The average gradient of Box Hill is 4%, maxing out in the low double digits (Strava/Veloviewer says 13.3%) in the stretch after the last ‘Zag’, as you climb up to the National Trust car park / cakery.

How Long Does It Take To Ride?

Professional cyclists (primarily those taking part in the 2013 RideLondon-Surrey Classic) dominate the leaderboards of the Box Hill segments within Strava. For the segment used to calculate the ride stats above (i.e. the ‘full’ Box Hill climb), British rider Ian Bibby currently holds the top spot, climbing it in 7 minutes 39 seconds. That’s an average speed of 33.7km/h (which is pretty mind-boggling).

According to Strava, my best time for the segment is 19:26, ‘performed’ on the same day as Ian. That said, I did stop at the viewing point (which isn’t the top) and take photos. I didn’t see the TV coverage of the pro race, but I’m pretty sure the peloton didn’t dismount to take ‘selfies’ at any point on Box Hill.

Most people are probably going to take between 8 and 15 minutes to do the full climb, with the more memorable section (the zigs and the zags) taking around two thirds of that time.

Which Sportives Climb It?

RideLondon (you heard of that one?).

Which Pro Races Use It?

It wasn’t quite a pro race (in the sense that cyclists rode for their countries rather than trade teams and no prize money was on offer), but Box Hill was the centrepiece of the London Olympics road race course, both for men and women. The men climbed it 9 times; the women twice. Mark Cavendish didn’t win; a renowned doper did.

Box Hill gets a huge amount of airplay (in the UK admittedly) considering it is neither particularly long nor particularly steep.

Maybe that’s the thing. Most UK road builders, not having to deal with hundreds (or thousands) of metres of ascent, have tended to go ‘straight up’ when faced with a hill. Box Hill, with its two full hairpins and steady gradients in between, allows British weekend warriors to pretend (if they squint) that they’re on a continental climb.

The resurfacing that took place prior to the Olympics makes for a smooth rural road surface unlike any other I’ve experienced in the UK. It’s worth climbing just for that alone.

And the National Trust cake doesn’t hurt either.

Are You Participating in RideLondon?

If the answer is ‘yes’, then I have one piece of advice: read the dedicated RideLondon section of the blog – a collection of advice and encouragement that I GUARANTEE will make your experience on the day all kinds of awesome.

That was easy, huh?

PS. Actually I have a second piece of advice: consider buying my book! It’s wizard!

1 thought on “Box Hill Cycling: Gradient, Elevation and Length of the Surrey Alpe”