Today’s offering on the Sportive Cyclist blog is a guest post by Spike at SingleHandedCyclist.Com.

It’s a really interesting article about custom-building a bike to suit his particular requirements (in Spike’s case, that all the gears and brakes had to be operated by one hand, as you’ll see).

The post has inspired me to think about how I might customise my own bike in the future (and how I should have the confidence to give it a go). Now, over to Spike

Isaac Newton In A Ford Escort

About 300 years ago a fellow called Isaac Newton came up with his first law of motion, which states:

To put it another way (and in simple, unscientific terms): two solid objects cannot be in the same place at the same time.

This can be demonstrated by imagining the object at rest being a pedestrian, and the unbalanced force being a Ford Escort van moving through a 30 zone at (for the sake of argument) 67 miles an hour.

Now, when an eminent worthy like Newton comes up with such a law, you’d think that only a complete numpty would test it empirically.

Well, “Hello, folks. My name is Spike and I was that numpty”. I can assure you it wasn’t deliberate.

At the time, some 30 years ago, I was in the RAF and I’d been into town for a pool session (training for a Tri-services triathlon). Anyway, on the way home I crossed the road…..

Eventually my recovery was complete (ish). The only real long-term issue was the loss of use in my – dominant – left hand.

I never did go on to complete a triathlon, but I took up ultra-running instead (marathons were for wimps!) and ignored cycling for decades – at least until my joints decided to protest at years of pounding.

From Ultra-Running To Custom-Building

A few years ago I started a new job where I worked with lots of cyclists and thought I’d like to give it a go again – just as a commuter this time.

Partly I wanted to get back into a sport I’d previously enjoyed and partly to shift many kilos of middle-aged spread (imagine a lycra-clad version of the alien from Dark Star).

The issues presented themselves immediately. Bikes are designed to be used by people with two hands and I was starting with a 50% disadvantage.

I came to the conclusion that either I could:

Never a chap to eschew a challenge, I started looking around to see what was available.

As luck would have it, I was offered a 1980’s Dawes Galaxy tourer frame (one of the last of the UK-built Reynolds 531 models) as a base. 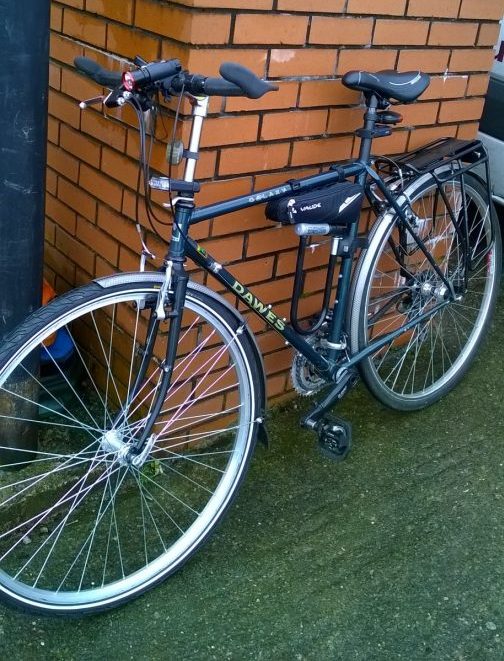 By today’s (2017) standards, I know it’s not exactly a ‘sportive’ bike – even at the time it was a bit less sporty than I’d intended. It was, though, long-legged, a start, and free at that.

Now the Paralympics were really starting to take off around that time, so I thought there would be no shortage of expertise in adapting things for folk with different approaches to life.

Cycling magazines and other 2-wheeled pornography, however, all appeared to showcase the latest ultra-fast, ultra-light velocipedes as used by Lance Armstrong et al to demolish mountains and rip up the Continental tarmac – admittedly with some sub-radar assistance.

Nowhere could I find anything much about adapting bikes, other than how to make them lighter and faster.

A colleague put me in touch with the British Paralympic Association and they were very helpful as far as they were able and were extremely free with advice and ideas.

The main disparity turned out to be that their equipment was, in the main, built from scratch or subject to expensive custom modifications, whereas I was after something rather less expensive and wasn’t averse to (let’s call it) a more agricultural solution.

I tried internet searches (such as they were at the time) and found that there were companies making and modifying parts that would work for me. Just not in the UK.

If I wanted modified brake levers, they were available from the USA (now something similar is available on eBay and Amazon).

Gear levers, on the other hand, were noticeable by their absence. Remember, these were the days of analogue levers, switches and cables – Di2 was merely a dirty glint in Shimano’s eyes.

I ordered the brake lever, a twin-pull affair, for about US $50 + shipping, VAT and import duty. I seem to remember it came to a total of about $70.

Having found the one crucial item I took stock of what I had in the garage, and what I’d managed to acquire, buy, cadge etc.

It came to the following:

It soon became apparent that the only way I could get this to work would be to forsake the drop handlebar configuration of the original Galaxy and to go for some type of flat bar arrangement – even if only because the brake lever physically wouldn’t slide around the bends on the drops. 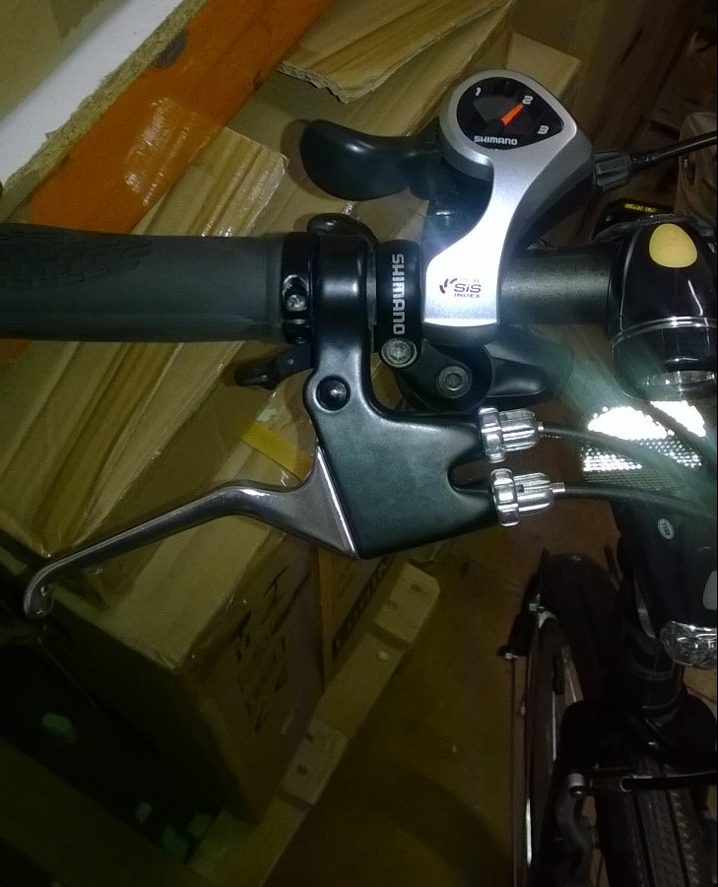 As it happened, the flat arrangement (while not ideal) did allow the layout of various permutations before committing myself to the one finally chosen.

The garage floor was cleared and the build commenced.

All The Gears, No Idea

In pretty short order (one afternoon), I had assembled a functioning bike with 2 brakes, but no working gears. I decided to pop into Bristol to see if any of the bike shops had any ideas on how I could sort the gears.

At that point I discovered that there are (or were) 3 types of bike shop, to whit:

These will sell you a car stereo, a wiper blade, a novelty air-freshener and a bag of sweets. They will even sell you a bike (partially assembled in a box). However – with some notable exceptions – their staff have little in-depth knowledge of bikes in real life.

Usually run by somebody who has experience of cycling (maybe a former coach or cycling journalist) or an enthusiast ‘retired executive’ looking for a career change (such people also set up a lot of micro-breweries, tea-rooms and craft shops).

These places, while well-stocked and with knowledgeable staff, sell mechanical aspirations. The bikes they stock tend to be the stuff of lottery-winners’ wet dreams, rather than those appropriate to the likes of you and me.

The shop may be anything from a well-lit emporium full of cycling esoterica to a dingy gallery under a railway arch, strewn with decaying cardboard boxes.

The common theme will be that the staff (possibly just one bloke) will have deep and technical knowledge of bikes going back to the days of the Penny-farthing (and, possibly spare parts for that very thing).

They will shift their gasses to the top of their heads, suck their teeth and take a step back for a wider view of the unconventional pile you’ve just wheeled over their threshold.

With a wipe of their hands they will exclaim “Ah, yes. I can see what you’re trying to do. Let’s see if we can make it work, shall we?”

If you find one of these places, go out of your way to nurture them, they are a dying breed. Sadly, I didn’t learn that lesson in time and the shop is now a Chinese takeaway.

Having stumbled upon an example of Number 3, there followed several visits, where we puzzled out how to get the gears adapted for a dextrous monomain.

Various technical solutions were raised and discarded as being too expensive or impractical (the truly useless ones being proposed by me).

One day I popped in on my way home to be greeted with a grin of triumph. The solution was almost too simple.

We fitted the Right-hand (rear) shifter as normal and fitted the Left-hand (front) shifter on the same bar but upside-down and back-to-front.

This looked quite bizarre but – after a little practice – worked perfectly! 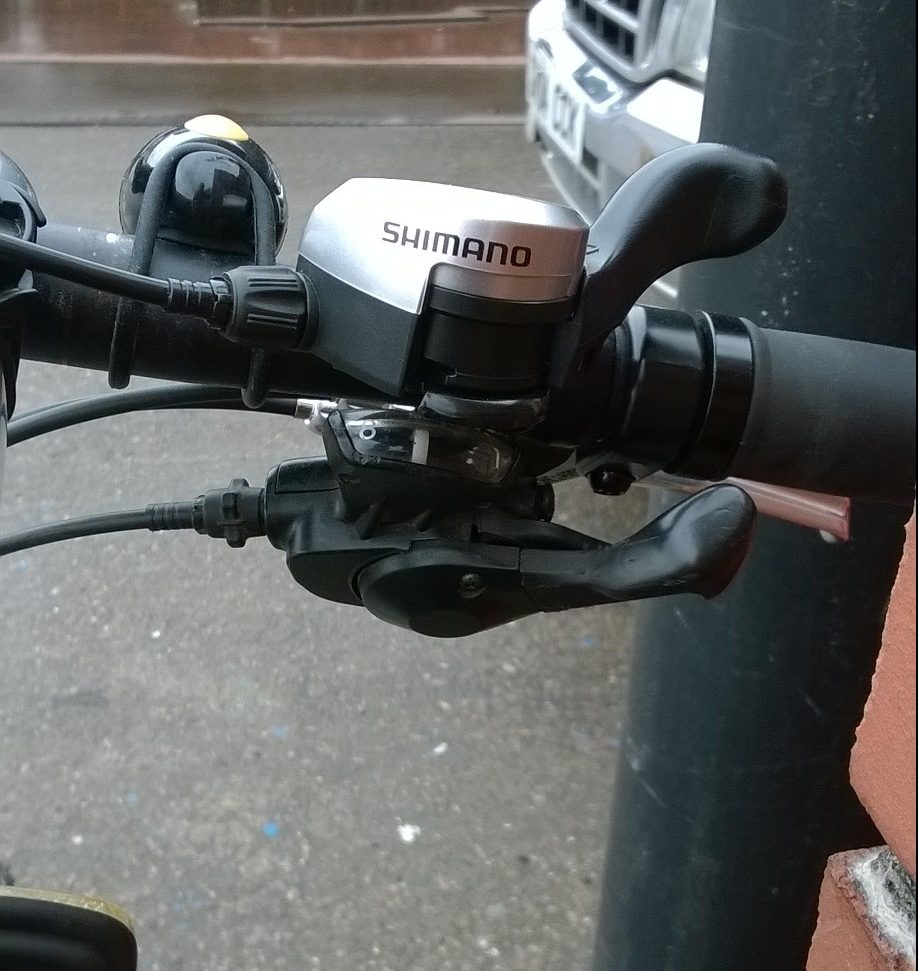 The result is a 30 year-old bike that this 50-something year-old can ride one-handed. As a bonus, it’s a theft-deterrent!

A while ago, a be-hoodied local ne’er-do-well tried to pinch it from outside a shop but got so confused trying to operate the controls that we caught up with him easily before he’d got more than a few yards.

Admittedly, it isn’t the featherweight long-legged speed machine that I had in mind but it is reliable, comfortable and sturdy enough to cope with my extra poundage (kiloage?).

My next project is something rather lighter and faster, but using more modern technology (why use cables when you can use electronics and wires?).

That, though, will be a topic for another post more worthy of this forum.

Now, question to the readers, have you customised your bike?

Yo! My blog contains Affiliate Links. These are links to online stores, such as Amazon, Wiggle and Chain Reaction.

If you click and buy something, you also get the benefit of being a supporter of ‘my work’.