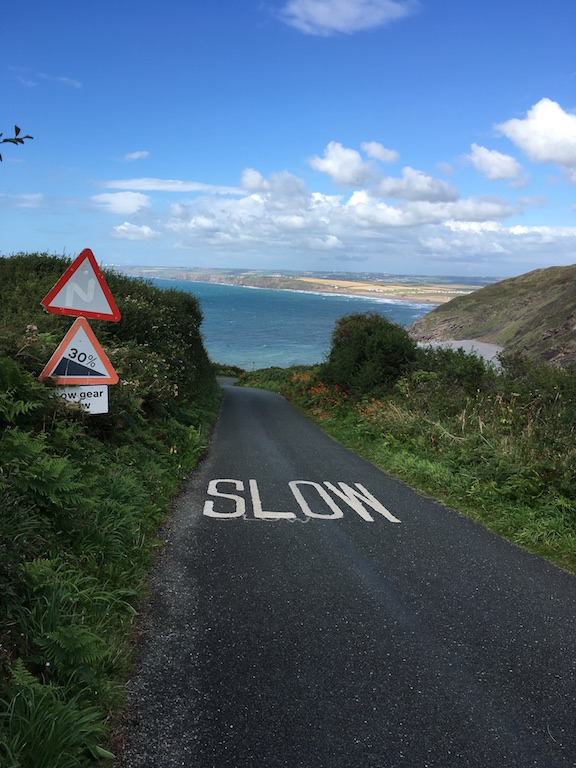 Since going back to work a couple of years ago, I’ve struggled to piece together a consistent period of riding. Work, family and laziness have tended to get in the way, particularly if the riding conditions were anything less than ideal.

This situation seemed to have improved in early summer 2017 as I managed to ride consistently (sort of) during … [Mont frantically checks Strava records] … June and July.

I wanted to maintain this improved record during our summer holiday in south west England. I needed some impetus for bring my bike on holiday with us. And I found it in a book.

Note: This post contains affiliate links. If you click and buy something, I get a commission, at no extra cost to you.

I have a passing desire to tick off ‘Greatest Climbs’ when I have the opportunity to do so.

To non-UK (or simply non-aware) readers, ‘Greatest Climbs’ are the sections of (initially) UK roads that were identified, ridden and catalogued by the UK cyclist, Simon Warren.

Warren then canonised his findings in a range of books, starting with ‘100 Greatest Climbs: A Road Cyclist’s Guide to Britain’s Hills‘, followed by ‘Another 100 Greatest Climbs‘, before branching out into equivalent volumes covering climbs at home and abroad.

I guess international rider folk (or those really looking for great climbs) might wish to check out:

Anyhoo, as luck would have it, our accommodation near Bude in North Cornwall was sufficiently close to a ‘Greatest Climb’ to justify spending muchas moolah on new feet for my roof rack (my company car needs the rack to attach to the roof rails).

And then new roof bars when it turned out my old ones were too long.

And then suffering the hassle (and wind resistance) of driving all the way to Cornwall with my bike on the roof.

Just to remind my where it is, and to avoid having to take what is, in fact, an extremely portable ‘100 Greatest Climbs’ book, I took a photo of the relevant page. The number 111 indicates that Millook is in the second ‘Another’ volume of greatest climbs. I am glad I saved the weight by taking this digital image, and not the book, when I transported a cornucopia of child-related miscellany that served absolutely no purpose whatsoever…

I finally found a window in both the weather and my family duties, four days into our holiday. I set off south from Bude in order to bag the climb.

Millook actually provides two climbs for the price of one. Millook is a small beach-cum-hamlet in a little steep-sided valley-cum-inlet. The road (the red line in the photo) goes down one side of the valley and up the other (or vice versa, depending on your geographic persuasion). On this particular ride (which is on Strava here) I only climbed out of Millook in a southbound direction.

My descent into Millook (i.e. down the northerly side) was marked by a couple of minutes spent waiting in a traffic jam, as an ascending car attempted to navigate the (extremely) steep inside line on a corner, whilst trying to squeeze past a couple of vehicles coming down the hill.

Which was not kind on the clutch (of the car…).

At bottom, I had a slight crisis in confidence in my legs. I really wanted to ride the southbound climb (it’s the one in the book), but would that put me in pickle?

Having reached the top, would I be able to find a circular route back to Bude, without having to retrace my steps (pedal strokes) through the Millook crucible (pretty sure that’s the first time it’s been described as such)? If I did have to volte face, would I have the legs to tackle the second ascent of the Millook?

Thankfully, two gents at the bottom of the climb assured me that I could continue riding for a few miles and it would loop around to a ‘Wainhouse Corner’ [blank look] and I could ride back to Bude from there. They also confirmed (with a smirk) that the climb southbound would be nice and steep (or words to that effect).

Anyhoo, herewith the vital statistics of the climb.

Strava designates Millook southbound as a Category 4 climb (here’s how Strava classifies climbs). It also seems to think it starts at 118m below sea level (which, due to the proximity of the sea, I am inclined to doubt).

Decent riders will find that the pain is over in just under 4 minutes. I took about 6.

In terms of gradient, the ‘Greatest Climbs’ write up suggests that it reaches 30% in place. To be fair, the sign at the top indicates the same. Fiddling around with the Strava gradient chart (hovering the mouse pointer over various bits of it) suggests that the gradient is more like 20-25% (in places). Here is the Veloviewer imagineeration of the climb – the red-coloured sections denote gradients in the mid teens:

And now for some photos that clearly (do not) show how steep the climb is and are therefore (very un)helpful in indicating what it will feel to ride up.

(Irrelevant fact alert: These photos are actually from my second ride through Millook a couple of days later. Sue me).

Here is the bottom section of the climb: Here is the first hairpin. It reminded me of Alpe D’Huez. Just with more Atlantic. That hairpin then becomes a nice little ramp. Moving further up the climb (having missed out a bit), we have another steepish bend. There’s a nice view down to the beach from this corner. Not that you’ll want to stop at this point. And then power on up to the top. As mentioned above, I rode through Millook on two different days (the second ride is on Strava here). I lack imagination.

A few days later, in need of another bike ride, I set off back to Millook in order to (i) ride the northbound climb; and (ii) get some fotos for a blog post (the one you’re reading…).

This is what Strava has to say about it:

Marginally shorter than the southbound version and marginally fewer metres ascended, but marginally steeper (so there’s a marginal gain for you). Again it’s classified as a Category 4 climb.

And here’s a visual representation of the gradients:

The northbound climb is a bit more enclosed, so the photos are even less helpful. But far be it from me to be anything less than unhelpful on this blog … erm … so here are some fotovisuals.

The bottom section of the northbound climb: Not long after you’ve started, you’re into treelined (upward-reaching) lanes. The steepest section of the northbound climb is the dogleg that comes just after halfway. This culminates in the corner pictured below, after which the gradient eases slightly for the final dash to the top. The photos don’t really capture the gradient (I’m not a skilled camera-jockey it seems). The inside of the bend shown above is very steep indeed (so I suggest you might want to take the long way round the outside).

And finally, a shot looking northbound across Widemouth Bay, as I made my way back to Bude. If you do need a cafe stop at this point (everyone needs a cafe stop), the cafe in Widemouth Bay car park (a nicer location than it sounds) serves excellent coffee and chocolate brownies. So there you have it. I rode in and out of Millook three times. I think I can safely tick it off in the back of my Greatest Climbs book. In completing this mighty feat, I successfully completed two holiday rides, just about maintaining my burgeoning cycling habit over the period (and just about justifying the money spent on a new roof rack!).

On the off-chance you find yourself riding in the south west of England and in need of a steep climb to tackle, I hope you find this post useful. For the rest of you, well, add it to the place to visit.

Did anyone else get any decent rides in on holiday? Have you ridden in Cornwall?