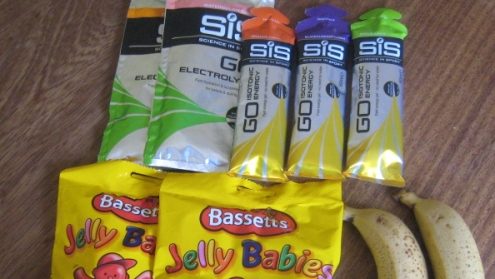 In this post I’m going to be looking at my nutrition plan for RideLondon.

By ‘nutrition plan’, I mean what (and when) I plan to eat and drink during the ride in order to provide the energy to propel me to victory on the Mall.

I wouldn’t normally produce anything resembling a formal nutrition plan for a ride. I’m a ‘Snickers and a bag of Haribos’ kind of rider. In sportives I rely on whatever is provided at the organised feed stops (with the aforementioned confectionary as emergency back up).

But RideLondon is bit different from what I’m used to.

At 100 miles, it’s longer than I’ve ridden before. There are time cut-offs to beat. I want to leave less to chance (having raised in excess of £1,000, I definitely want to finish).

Why Should You Consider a Nutrition Plan for RideLondon?

Here are my arguments for at least considering your nutrition:

For me, it comes down to the fact that I’ve fudged these things in the past. My tendency is to not eat or drink enough – I can get away with this over a 3–4 hour ride, but not over 7–8. If I have a plan, even if I don’t stick to it to the letter, I’ll be better off than simply relying on luck and the largesse of the event organisers.

What Do You Need to Eat Whilst Riding?

[Note: the following assumes you’ve had a good breakfast and are ‘fully fuelled’ prior to the event]

I am not a nutritionist, so take what I say with a pinch of electrolytes, but for a one-day event, all you need whilst riding is energy (plus water and maybe some replacement salts).

That energy needs to come from carbohydrates. From my research (i.e. using Google), I understand that most people undertaking endurance events need between 45g and 60g of carbohydrates an hour, with 60g being the upper limit of what most people can process over that period.

Despite having highly-qualified sports nutritionists and Instagramming team chefs, professional cycling teams keep things simple for their riders whilst they are on the bike. They provide the riders with food in standardised amounts (for instance. in volumes that provide 20g of carbohydrates per portion), allowing the cyclist to calculate easily the amount they need to be eating.

My aim is to do something similar.

The Building Blocks of My Nutrition Plan

My intention is to consume approximately 60g of carbohydrates for each hour of my RideLondon ride.

That total will be built using the following components:

In any given hour, we’re looking at combinations like:

You probably get the idea…

The main downside of this approach is that all of these things are incredibly sweet (carbohydrates that provide energy quickly do tend to be) and could therefore be quite difficult to consume as time goes on. I’m debating whether to take something like a bag of salted peanuts just in case I really can’t stomach another gel.

Even using such carb-intensive fuel, the amount of food that needs to be carried around is going to be substantial, if I don’t want to rely on the organised feed stops at all.

To provide 420g of carbohydrates (the lower end of my envisaged requirement), we’re talking about carrying something like the following:

Of course, half of that should have been consumed by the time the road starts to tilt upwards, but it may still put a strain on carrying space along with whatever else I bring along (I will be following the rules that forbid hydration packs (#32) and frame-mounted pumps (#30); I will ignore the one about under-saddle bags(#31)).

It probably makes sense to carry a proportion of my food requirement (maybe the gels and the sports drink sachets that I’m used to*, and the Jelly Babies), and hope that the feed stops provide the rest (bananas always seem to be provided at sportives).

(*Er, that I intend to get used to over the next week and a half!)

Unless I plan to bring a camel and a codpiece along with me, I’ll need to stop for water and ‘comfort breaks’ anyway.

What To Eat and When on RideLondon

In my defence, the following table sprang initially out of my fear of missing some of the cut-offs outlined in the ‘Final Countdown’ information pack. I wanted to know, based on my start time and estimated speed, how far ahead I’d be of the enforced diversions and the broom wagon (I think I’ll be ok).

Then I thought I’d create a hypothetical eating plan, setting out what I might eat each hour, where I expected to be at the end of each period and when I would be hitting each hub/drinks station (note: there are a lot of drinks stations, which is probably a good thing).

The likelihood of me following the plan fastidiously is very low indeed. But even if I only manage to follow it approximately, that’ll be considerably better than simply leaving it to chance.

Finally (finally, finally…), feel free to ignore the table if it’s of no use to you. If nothing else, perhaps it’ll help you arrange with your supporters when to be in a specific place to cheer you on (clearly you’ll need to recalculate for your own anticipated speed), or maybe make you think about timing a mouthful of Jelly Babies to kick in just as you reach the foot of Leith Hill.

The RideLondon Nutrition Plan (In All Its Glory…)

* To consume at West Horsley – for Newlands Corner climb

*** To consume on road to Dorking – for Box Hill climb

Nutrition on a long ride is important. I’ve put effort into making my legs as strong as possible (sort of). I don’t want to find that I’ve run out of petrol in the depths of Surrey with a peleton of pros bearing down on me. I don’t want to have to give back £1,000 of sponsorship money because the Broom Wagon had to pick me up from a (£50,000) hedge in Wimbledon (as I sob gently to myself).

Who knows how closely I will follow ‘the plan’ on the day, but at least having thought about nutrition, I’ll make sure that I carry more than an out-of-date Snickers and a few sweaty haribos.

What about you? What do you take to eat on a long ride? Have I made any glaring errors (it happens)? Have I missed an alternative super food – fig rolls, Jaffa Cakes, Kendal (Bloody) Mint Cake? Let me know in the comments below.

20 thoughts on “What Should You Eat During Your RideLondon Ride?”