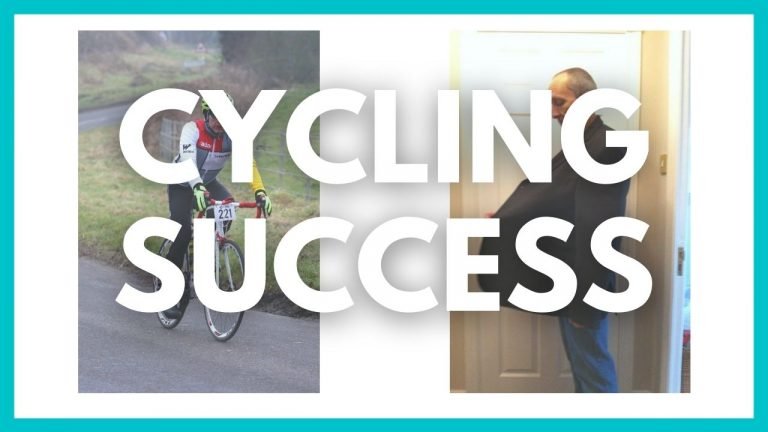 In today’s post I am delighted to feature an interview with Mark Hammond.

Over the course just one year Mark lost a whopping 6 stone.

He achieved this as a result of exercise – primarily road cycling – and changes to his diet.

He got so fit that he completed the Etape du Tour, RideLondon and the 206km Dragon Ride Gran Fondo, all in one year.

And in this interview he’s going to tell us how he did it.

Mark wrote about his cycling and weight loss journey, under his ‘Velopixie’ pseudonym, on his blog, which you can read here.

Mark’s story is hugely inspiring, whatever your level of cycling.

Please do share it with as many people as possible, particularly those people for whom weight and body image concerns are stopping them from enjoying the benefits of cycling (if you do know people like this, there is a great YouTube video that I’ve linked to at the bottom of this post).

Why were you motivated to start road cycling?

In January 2012 I decided that it was time to lose some weight and try and get my fitness back to the sort of level it was at when I was younger and regularly rowing and kayaking at a competitive level. At the time I weighed a little under 17 stone 7 pounds and struggled to walk up the stairs without being out of breath.

Following a couple of months of what can only be described as dieting, I was making progress with weight loss and was starting to feel fitter by virtue of my daily sessions on my home rower and a morning walk/jog.

It was at this point that I realized I might be able to actually take a sport up again. I decided that I needed a sport that would stretch me physically and have a target event to provide focus during training.

I decided to take up road cycling because I could participate in it without being reliant on other people (team members) and sportives seemed accessible. I had found out about an event called the l’Etape du Tour. It seemed like a sufficiently mad target for a novice to set his sights on entering and finishing 12 months after taking up cycling.

I ordered my first bike in May 2012 and took delivery of it in June 2012. At this point I had not been on a bike for 29 years and had declared to anybody that would listen to me that I was going to enter and complete the 2013 l’Etape du Tour.

At the time I was describing goals as follows:

•    Enter and finish my first sportive by September 2012

The last three have all been achieved, the second target has been changed to 10 stone 10 pounds and we’ll have to wait until 7th July of this year to see if I achieve the first target.

How old were you?

I was 3 months away from my 50th birthday.

How has your health changed since starting to cycle?

When I started cycling in June 2012, my fitness had improved from its extremely poor level at the beginning of the year.

As well as being generally unfit, I was also suffering from extreme food intolerances and acute sleep apneoa.

Since that time my health has improved dramatically – I now no longer suffer to any great extent with any food-related health issues and my sleep apneoa is no longer a condition that is potentially life threatening.

The biggest improvement in my health would have to be the reduction in my weight and the overall impact that has had on my life in general. At the end of December 2012 I had lost six stone (or 85 pounds) and weighed 11 stone.

I guess the biggest indicator of how my health has improved would be my current training volume and progress on the bike. I currently train 6 days a week (a combination of cardio, strength and actually riding a bike or indoor trainer) and average around 10-12 hours training completed a week.

This week (week ending 24th March) I will finish the week having ridden a little over 200 road miles with some additional miles completed in the gym on the indoor trainer.

What was your fitness level when you committed to doing the Etape? Were you confident that you would be able to do it?

When I started cycling in June 2012 and committed to l’Etape, I was walking and jogging around 5 miles a day and the furthest I could cycle in one go was around 16-20 miles before being unable to go any further.

I was confident that I would be 100% committed to preparing for the event to the best of my abilities. Confident of finishing? Not really, but I was sure that I’d prefer the pain of training for, and completing the event, to the pain of failing because I hadn’t bothered to train and prepare properly.

Where did you get information on training? Did you seek professional coaching advice or use books and/or the Internet?

I did quite a lot of internet research and bought a few books on cycling-related training and came to the conclusion that whilst I understood what I was reading, I needed the support of a specialist cycling coach if I was going to stand a chance of being competent enough on a bike to not embarrass myself at l’Etape.

Between July and November 2012 I worked with Simon Vincent at Total Cycling Performance, who put together a bespoke training plan for me that was designed to improve all of the key aspects of cycling performance. The methodologies that were central to this plan are still the core of my current training plan.

How long after starting did you do your first sportive?

My first sportive was the South Downs Challenge run by the Rotary club of Waterlooville and it was a little under 3 months after I started cycling. I completed the 80k route and achieved a silver standard award.

Have you changed your diet since starting to cycle?

My diet has changed beyond recognition since January 2012 and is now very focused on providing the right types of food to fuel my training and cycling programme whilst still enjoying food.

I still have a drink, still eat chocolate, still eat bread and I still enjoy going out for a meal and having a dessert – I just don’t eat and drink these things as much as I used to! I don’t tend to eat processed food or ready meals or other convenience foods.

Something I realized quite early on is that there is a correlation between the colour of food and whether it is going to be good or bad for you. If we consider the colours that are attractive to the eye, most of the food that is good for us comes to us in its own packaging that is a bright and breezy colour (reds, greens, orange, yellow etc).

The foods that are potentially bad for us tend to come in one colour, beige (think, about anything you can buy in Greggs, McDonalds, Burger King, chip shops etc).

My diet is constantly evolving as I continue to learn which foods are the best sources of energy for training and cycling and I generally try to achieve a balanced diet that has an appropriate split between carbohydrates, protein and fat. This week the overall percentage split is 55% carbohydrates, 29% protein and 16% fat.

What are your cycling targets for 2013?

My targets for 2013 have evolved a bit from simply finishing l’Etape and would be summarised as follows;

•    Achieve a gold standard time on this year’s Exmoor Beast

What are your 3 top tips for someone getting started in road cycling?

There is so much good advice that somebody starting out could receive, however the 3 tips I would give would be:

What is your best piece of advice for someone doing their first sportive?

Don’t worry about it being your first sportive. Everybody will be really friendly.

Turn up and ride the event at your pace and enjoy your day out with other like minded people.

And with a Peter Sagan-style wheelie, the Velopixie left to continue his preparation for the Etape.

If you are not inspired by his story, and not motivated to follow his no-nonsense to successful road cycling, then I can only imagine that you are an emotional husk. Assuming you’re not an emotional husk, you should definitely read Velopixie’s blog. I will be following his training preparation with interest.

If you’re after another cycling weight loss success story, be sure to check out how Giles lost one third of his bodyweight by cycling on a regular basis.

On the other hand, if you are looking for more road cyclists that don’t fit the traditional skinny whippet image, then check out Leonard Lee’s fantastic YouTube channel:

15 thoughts on “Cycling to Lose Weight: How One Man Lost 6 Stone by Cycling (More Than a Third of His Bodyweight!)”