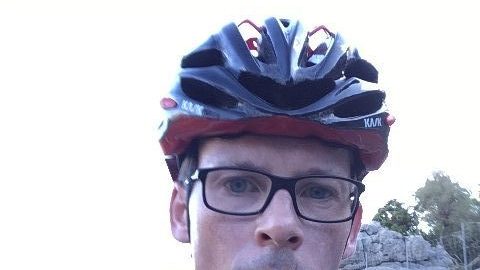 I’ve been writing the Sportive Cyclist blog for nearly 5 years now, so I guess it’s time to hit the big red self destruct button.

It’s time to get political.

(* which is I think the name of the new BBC show commissioned after they lost the rights to GBBO…).

In essence, will wearing a make me more aero (#moreAero)?

Oh wait, the other debate. Should we be forced to wear helmets when riding a bike?

This post was prompted by a tweet from Chris Boardman, who I once met in the entrance lobby to a WH Smiths in Birmingham. CB’s tweet was followed by an article that he wrote for the Sunday Times this past weekend.

The STimes has a paywall so luckily for me, but not so much for Chris, the article was not published. Mainly because it appears he sent it to the wrong email address:

I’m a great believer that when a paper makes a mistake on the front page, they should apologise on the front page. So, I owe the @thesundaytimes an apology. The article I wrote for them was sent to the wrong address. Might not mean much to some but it does to me. My apologies

Instead Boardman’s article was published on the British Cycling website.

Time For Me To Misjudge The Sportive Cyclist Audience…

When I read the article, it’s preaching to the converted.

It sort of fits with my life view. I don’t want to be forced either to wear a or not to wear one. Any proposal to make the wearing of helmets mandatory goes against the evidence (and I does like me some evidence).

Whilst Boardman doesn’t link to the specific studies he cites, I’m confident they’re legitimate. I’m certainly aware of the Australian study around forced used leading to reduction in cyclist numbers.

He talks about reduced cycling activity leading to more deaths in the population from silent killers. I think there are other studies that show that more cyclists on the road, resulting in higher visibility and greater awareness from other road users, makes the act of cycling itself more safe.

Whilst I focus on encouraging more cyclings at the ‘road’ end of the spectrum (er, you might have read my blog?), I am in favour of much more cycling taking place more generally. I want my kids to cycle safely.

Do Road Cyclists Care About The ‘Helmet And Hi Viz’ Debate?

As a road cyclist, wearing a comes easily. Nowadays all our professional cycling heroes wear helmets as they go about their business. Images of Eddy Mercx or Greg Lemond (even Lancelot Armstrong) riding with bare heads belong to a bygone age.

Even hi-viz clothing can be sort of trendy in the road cycling world (he says, typing through gritted fingers). Neon colours for clothing tend to come into and out of fashion, but reflective panels and logos are found on most outer pieces of clothing.

Road cycling tends to be a distinct activity, a hobby or a passion, rather than the integration of a mode of transport into our normal day-to-day life. We generally don’t have a problem, therefore, in wearing a specific outfit to do it.

Road cycling, as a hobby, also has a tendency towards tribalism (I. AM. CYCLIST). There is perhaps a tacit acceptance of the ‘them and us’ mentality with other road users (even though the majority of us drive cars… often with bikes on the top).

Every tribe needs a uniform.

We put on our Batfink shields of lycra, a that says, “I’m comfortable dicing with death”, and practise our ‘don’t you dare turn out of that side road in front of me’ tractor beam stare.

Who cares if the politicians force us to wear helmets? We do it anyway.

Whisper It … It’s Not All About The Road Bike…

I think this country will be better if more people ride bikes. Actually, scrub the ‘I think’ bit.

Not recumbent bikes of course. We don’t need more of those. (Of course I jest…).

To have more bikes on the road, and more ‘normal’ people riding them, we need to get across that it’s safe to do so. That protective safety gear, including head armour, is not a necessity.

I think road cyclists should make more effort to cycle like normal people from time to time. And really I’m talking (typing) to myself. I should make more effort to cycle with the kids, both on the road and off. To cycle when running errands (admittedly, living in the countryside, this will make errands a little more time consuming!). Wearing normal clothes. Using my judgement to determine whether a is a necessity.

I’m going to try to do my (little) bit to promote the bike as a (beautiful) mode of transport for the many and not only a hobby for the few.

What Do You Think?

Should wearing by compulsory? Do you ride a bike outside of (#)roadcycling as a hobby/passion/penance? Should Sportive Cyclist quieten down and go back to reviewing carbon water bottle cages?

45 thoughts on “Do You Always Wear A Helmet When Cycling (And Should You)?”