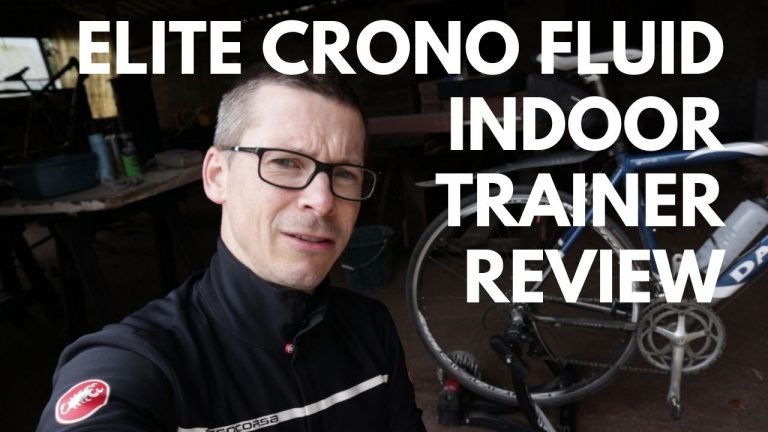 I’ve owned my Elite Crono Fluid Elastogel turbo trainer for over eight years. Which probably qualifies me to write a review.

I’ve used it to prepare for RideLondon, to attempt to maintain some semblance of fitness over the winter (hashtag fail) and to complete various 30 and 35 Days of Cycling Challenges.

In this post I’m going to attempt to give you a flavour of what it’s like to use and whether I consider it a worthwhile purchase (although, disclaimer alert, it was given to me for my birthday).

Given that it has a rather unwieldy name, from now I’ll shorten it to ‘Crono Fluid’ (which sounds disturbingly biological).

Note that this is now a pretty old trainer, so not widely available. I’ll let you do the ebay searches. But if you want Elite’s up-to-date equivalent, that would be the Qubo Power Fluid Trainer. But Wait – A Video Review? Of Course…

This post is an updated version of a review I wrote way back in 2014. Before video existed.

But now moving pictures do exist. So I can tell you about, and most importantly show you, the Crono Fluid trainer in action. Please to enjoy.

In the years that we’ve been together, I feel that that the Crono Fluid and I have become very intimate. We have spent many a sweaty evening together, whilst the kids are in bed upstairs and my wife is at work. I won’t lie, she (the turbo, not my wife) has caused me not a little pain*.

(* I don’t really call the turbo a ‘she’. This was just for literary effect. Honest…)

Is this relevant to the review? Probably not. I just wanted to get it off my chest.

What Is A Turbo Trainer?

Quickly, for those who are unsure, a turbo trainer is a smallish contraption that you fit to the rear wheel of your bike which lifts said wheel off the floor and puts it onto a roller. This allows you to ride the bike without going anywhere.

As you pedal to turn the wheels, the roller spins. The roller offers varying amounts of resistance to being turned, enabling you to get a sweat on.

You sometimes hear them called indoor trainers. But I have seen them being used outside. Hell, I’ve done it myself. So there’s a paradox for you.

(By the way, if you’re new to turbo trainers, and want to know more, check out my uber-guide-post: The Sportive Cyclist’s Guide To Turbo Trainers.)

The Crono Fluid creates resistance by having the rotor submerged in oil (that’s the ‘fluid’ bit, in case it wasn’t clear).

As a result (and don’t ask me how exactly), the resistance on the roller increases gradually and automatically as you attempt to turn it more quickly.

What this means in practice is that you can increase the resistance, and the intensity of effort that you’re putting in, by shifting up the gears. Want things to get easier? Simply click down to a lower gear.

I’ve found the fluid resistance makes for a realistic riding experience. It feels rights, which is more than you can say for a lot of exercise bikes found in the gym. Since the purpose of the trainer is to make you a better rider on the road (I’m assuming you’re not aiming to become a world class turbo wrangler), the closer to ‘real life’, the better.

Changing the resistance level using your gears also feels natural. You’re not having to reach for another controller. If you want things to be harder, click into a higher gear and the resistance rises. Even staying within the same gear, pushing a little bit harder makes the Crono Fluid push back at you. It makes for a very simple way to work hard on the bike.

Just to complete the picture, the alternative way for a trainer to give you something to pedal against is magnetic resistance. Apparently, magnetic trainers tend to be more noisy. Resistance levels are not controlled by the speed at which the rear wheel spins. Instead, you have to set the level yourself, using a control attached to you handlebars.

Magnetic turbos can also be ‘cheated’ (if you’re that way inclined). I don’t want to labour the point, but the fluid system means higher gear = harder effort (simples); the magnetic (and similar) systems introduce another variable (the resistance level). Say you set the resistance on the roller at a nominal ‘hard’ level, you can make your pedalling experience relatively easy by shifting down into your lowest gear.

That all said, magnetic turbos can provide greater resistance than fluid ones. If you’re a very powerful rider (which I am not), you may find that the Crono Fluid doesn’t provide quite enough resistance at the top end.

If you are in fact Chris Hoy, you may want to go for the Crono Hydro-Mag, which cunningly combines fluid resistance for the road feel and smooth resistance curve and magnetic resistance to provide extra grunt for your (b)all(s) out efforts.

The amount of resistance, and how it is controlled, is clearly important. Of equal import is making sure that your rear wheel is adequately secured to the roller. All the resistance in the world won’t help you if your wheel is slipping and effort is being wasted.

The Crono Fluid uses the weight of the rider to apply pressure on the rear wheel, pressing it firmly against the roller.

The roller itself is covered with ‘elastogel’. For want of a better description, elastogel has a little bit of ‘give’, which avoids the tyre slipping on the roller as you put down a big effort.

The design certainly seems to be effective. I’ve never had an issue with the rear wheel slipping at higher efforts. This may, of course, be down to the lack of force in my higher efforts…

A potential issue with trainers is that they cause excessive wear on standard road tyres. According to Elite, the elastogel surface to the roller cuts down on this tyre wear.

Often people will buy hard-wearing turbo-specific tyres for their static training needs. I haven’t (yet), mainly because I haven’t noticed particular wear and tear on my tyres. The turbo is not (to the naked eye at least) surrounded by little fragments of rubber.

Attaching The Bike To The Turbo

Fitting your bike into the Crono Fluid is very straightforward.

First you need to replace the skewer on your rear wheel (i.e. the spindle that goes through the axle, attaching the wheel to the frame), with a specific quick release version (it comes with the turbo and acts like almost every other quick release skewer available).

With this done, you place the bike with the rear wheel on the roller, and move up the arms of the trainer such that the ends are in line with the skewer. You then screw in the handle such that the ‘cups’ on the end of each arm move in to hold each end of the skewer, locking the wheel into the turbo.

Maybe it’s best if I show you (I MADE ANOTHER CRUDDY VIDEO!):

That said, if you can, I would recommend having a bike permanently attached into the turbo. Avoiding even a little bit of hassle in setting up before your turbo session can make the difference between doing it and sacking it off as a bad job. But that’s a story for another post.

Does The Elite Crono Fluid Trainer Work With Zwift?

In short, yes. And it also works with Trainerroad, RGT and assorted other indoor cycling apps (that didn’t exist when I first wrote this post).

Generally speaking, all of these apps use power to determine how fast you go within the app (or to see how well you are sticking to the proscribed training session).

The Crono Fluid does not have a power meter built in, nor does it broadcast an estimate of power (it doesn’t ‘broadcast’ anything since it isn’t a smart trainer). However, provided you have a speed and cadence sensor attached to your bike, and once you have told it that you’re using the Elite Crono Fluid trainer, Zwift can estimate your power.

It does this using wizardry (and known power curves for a range of popular non-smart trainers, including this one).

I’ve tried the Crono Fluid with both Zwift and Trainerroad, and it worked fine (actually, really well). You do have to be careful about maintaining a constant tyre pressure each time you use the trainer though, if you want the estimated power numbers to be somewhat accurate over time.

If you don’t have an indoor (or turbo) trainer already, the Elite Crono Fluid Elastogel (or the Qubo Power Fluid) is an effective training tool at a good price. It’s easy to set up and to use. It feels ‘good’ to ride – that is, it feels sufficiently similar to riding on a road for it not to be a distraction.

There are other (more expensive) trainers available which connect to computers and tablets, allowing you to simulate famous routes and climbs. These are primarily to help alleviate the boredom inherent in spending 45 – 90 minutes staring at the same piece of wall.

If you can think of other ways to entertain the mind (I listen to podcasts; you can listen to music si vous voulez), the Crono Fluid is just as effective as more expensive machines in building your fitness.

As mentioned, you might struggle to get this older trainer (unless you want to make me an offer I can’t refuse). I’d suggest you go for the modern-day equivalent: