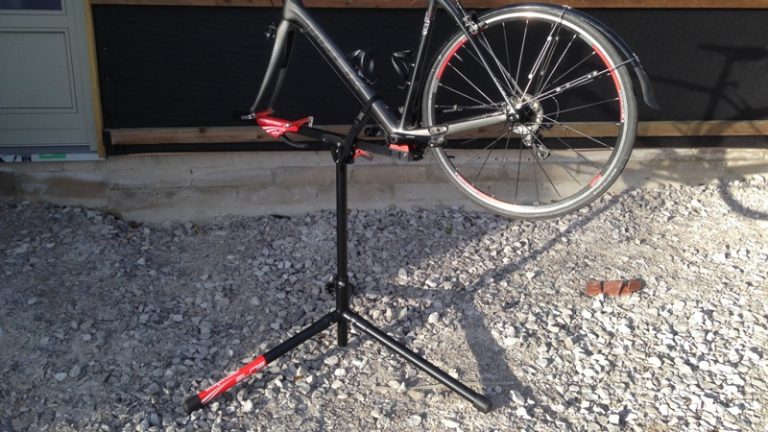 It’s time for me to, once again, apply my razor-sharp analytical skills to the assessment of a piece of cycling equipment. I’m going to ‘review’ the Elite Race .

In other words, I’m going to waffle a bit, show you some photos and a video and try to help you decide whether a work stand might be useful to you.

There Is A Newer Version Of This

Since writing this review, Elite has brought out a newer version of this , the ‘Workstand Race FC’. The design is based on the same principle: with the bottom bracket resting on a mount on the stand arm. The fork (or rear drop out) connection has been updated such the stand is compatible with thru-axles as well as your stand quick release skewers.

The construction quality seems similar (based on a sharp-eyed perusal of the fotos…), which is key when you want your cyclo-maintenance equipment to last.

I take it as a good sign that my original Elite Race is still going strong as I write this at the end of December 2020, nearly 7 years after I bought it.

Anyhoo, here are the links if you want to investigate the new version: Why A Work Stand?

I purchased the stand back in (furiously checks Wiggle account), January 2014. If memory serves, I bought it because I wanted to look a bit more pro whilst tinkering with my bike. I’d had enough of turning the bike upside down, every time I wanted to have a fiddle (with the bike).

As it happens, I’ve been very happy with it. It DOES make me look more pro (in my humble opinion).

But the main real benefit of a stand is that it moves my bike up to waist-to-chest level, rather than feet-to-hip.

All jobs I might want to perform on the bike can be conducted without either hunkering down on my haunches (putting pressure on those precious knees) or bending down. And noone wants to be thinking about my haunches.

At The Bike Wash, Yeah!

Washing your bike when it is ‘en stand’ (not French) is so much easier than either:

Other cool* things about washing a bike in a stand:

I can’t guarantee that getting a stand will make you a more punctilious polisher of your steed (er…), but you never know.

Finally, once I’ve finished cleaning my bike, I like to spin it around on the stand and admire my handy work.

The work stand is just as useful for non-water based bike maintenance. Probably more so.

I can do the fiddly jobs, wielding the necessary tools, trying to avoid getting (too much) grease on my hands (and clothes) without also having to do that whilst hovering a couple of inches off the ground (hovering in the squatting sense; not like a genie).

First off, it seems pretty solidly built. It’s certainly a good weight. This is A GOOD THING, since having the stand overbalance with a bike mounted upon it would be nothing short of disaster.

It has three tubular metal legs, which can be folded up for (reasonably) easy storage.

The stand does require a bit more space when in use. But not a great deal more space than you would need if you were simply to  fix your bike whilst resting it on the floor.

So How Do You Put Your Bike On The Stand?

First off, you need to remove one or both of the wheels. Once you’ve lifted your bike onto the stand, the bottom bracket rests in a little red plastic cradle: 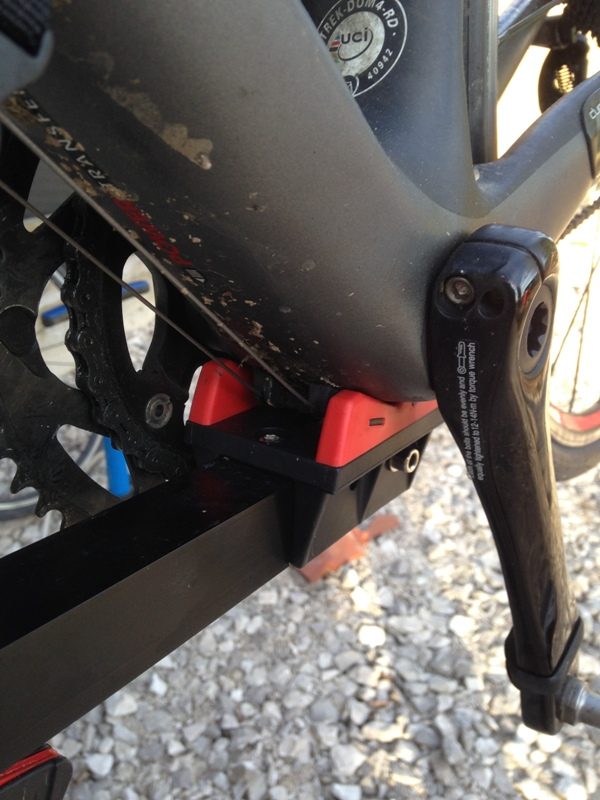 Then you have the choice to lock your bike to the stand with either your front drop-outs or your rear ones.

In the photo below, I’ve attached my bike with the front fork: 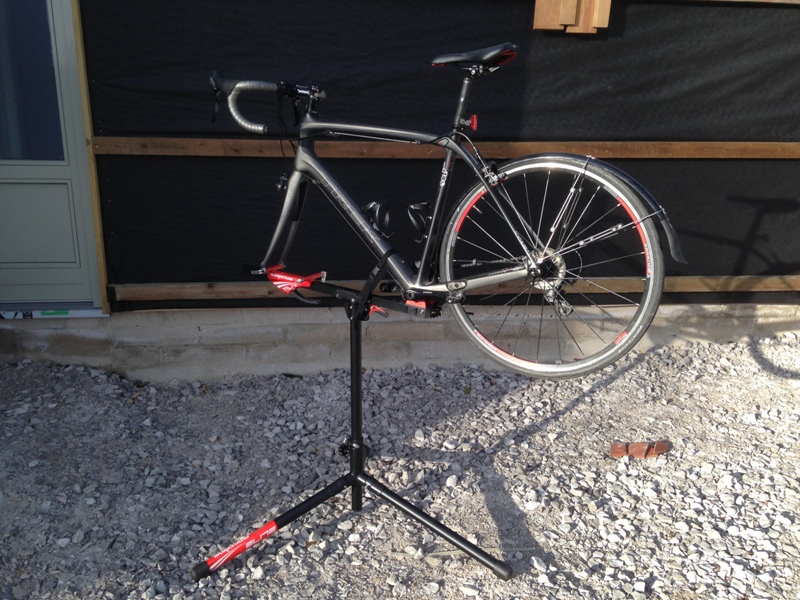 Here’s a close up. The quick-release skewers work in exactly the same way as those found in many wheels. 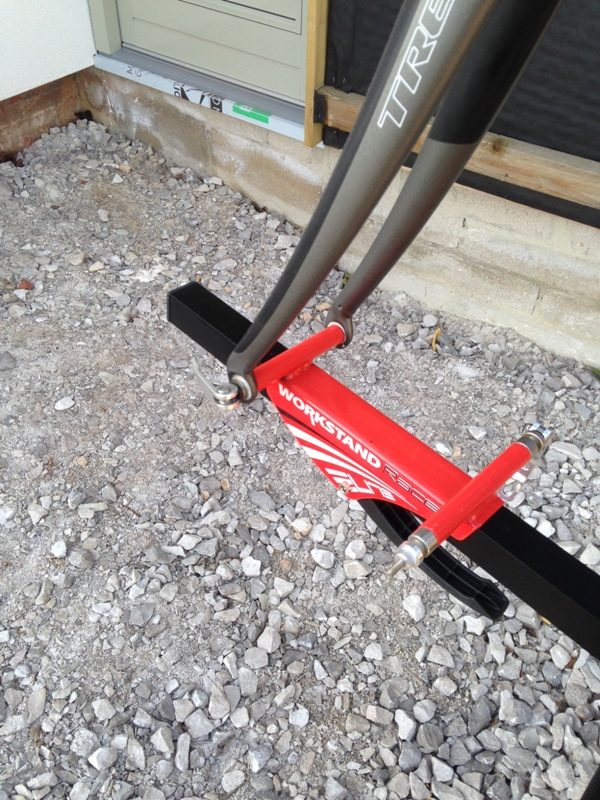 There are two fixing points: one for front forks; the other if you’re attaching the bike at the back (the distance between drop-outs differs for the front and rear wheels).

The red thing slides forwards and backwards to accommodate different-sized bikes. The black handle underneath locks it in place.

It’s worth mentioning at this point that the handle broke the first time I used the stand. I squeezed it too much and it snapped. I’m sure we’ve all been there…

Wiggle arranged for the broken stand to be collected and a new one sent in its place, so there was a happy ending.

Avoid this rigmarole by not employing a death grip when putting your bike on the stand.

There is a strap that provides security. 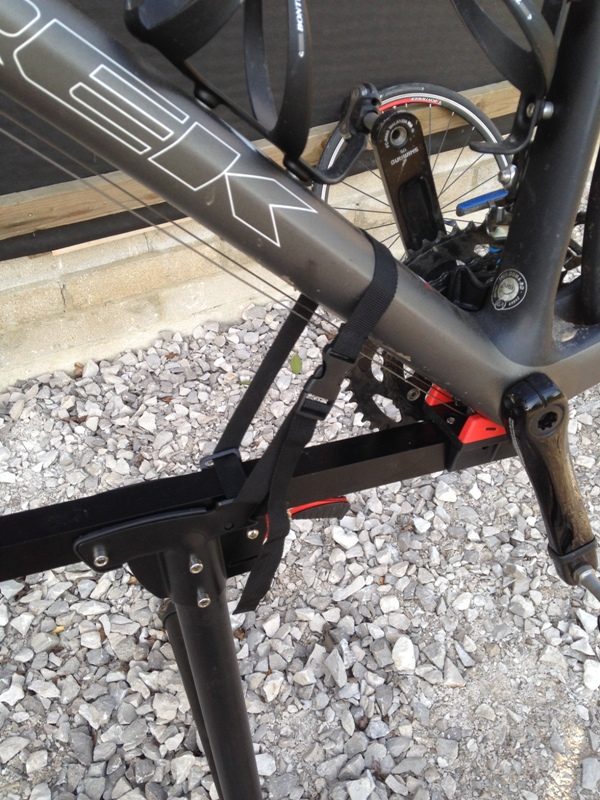 My impression is that the strap is meant to be done up at the end. I tend to do up the buckle as soon as the bike is sitting on the cradle.

Tightening the quick-release fixing at the front is, for me, a two-handed job. I strap the bike to the stand to prevent it overbalancing backwards whilst I’m tightening the skewer.

Et voilà, the bike is firmly attached to the stand: 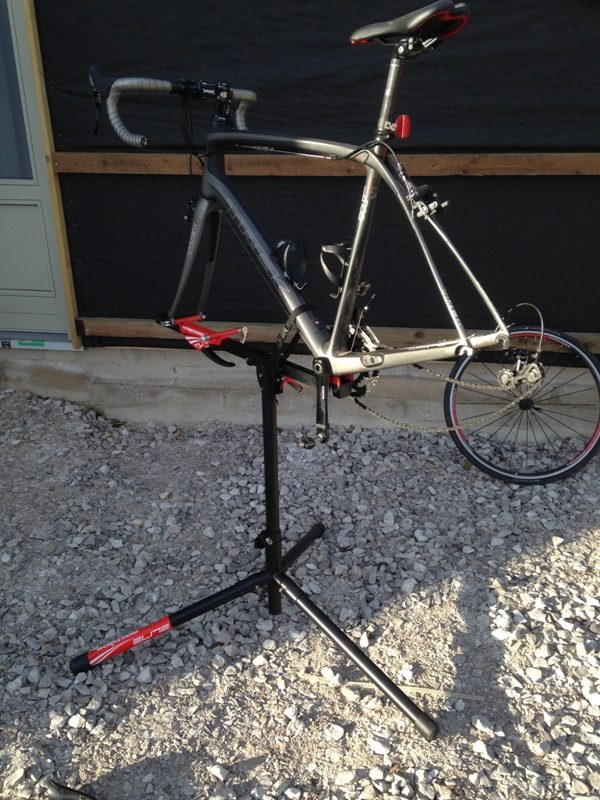 What you’re looking at there is me removing my mudguards, ready for the summer season. The perfect task to do on a work stand, rather on the floor.

A picture tells a thousand words. How about a video?

Your wish is my command (and my haunches have started hovering)…

This (speeded up video) shows me attaching the bike to the stand. Enjoy. If you can.

What Are Others Saying?

The Elite Race has historically been popular with purchasers. The previous version (i.e. the one I talk about above) had loads of reviews on Wiggle with an average rating of 4.7 out of 5. Which aint too shabby.

The new version looks a bit too new to have attracted any reviews!

Anyways, here are the relevant links if you’d like to purchase one: