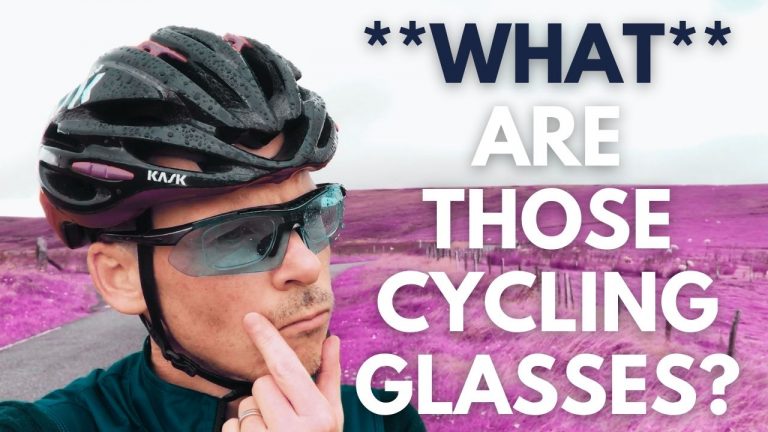 What are those cycling glasses?

…Is one of the most common questions I seem to receive on my YouTube channel.

On videos that are not about my glasses.

So I made the video below, and wrote this post, to answer the question.

So what are these glasses and where did I get them?

And I bought them at a booth at the Cycle Show in Birmingham, UK in September 2019. But don’t worry, you don’t need to travel to a large bike show in the olden days in order to buy them. They’re available from, wait for it…., a website!

The attraction of these glasses over other prescription cycling glasses I’ve considered? The cost.

I’ll admit I haven’t done extensive research, but these are a lot cheaper than Oakleys.

How Do They Work?

This is probably the bit that makes them cheaper.

It’s a two-part design comprising a prescription insert at the back with an interchangeable lens at the front.

Mine came with five different lenses, to deal with different light conditions.

Then we have removable plastic arms.

The Hawks also came with an elasticated head strap. I tried it about once times. The strap was uncomfortable, too tight and it sproinged off – which sort of defeats the object.

As a cyclist, I have no need for sunglasses to be strapped to my head.

As a somewhat related aside, I think the strap is supplied because these are not just marketed as cycling glasses.

In elasticated mode, I think they’re intended for shooting clay pigeons and triathletes. Other than the odd time I’ve worn them whilst watching my son play cricket, I can’t comment on their efficacy for alternative sports.

My prescription insert features single vision lenses, but you can specify bifocal or varifocals.

I really don’t know anything about bifocals or varifocals generally but I was interested/amused by the explanation page on the Eyepod page. What would normally be considered the reading area on a standard bifocal lens (for close up stuff), is described as a ‘Garmin reading area’ (Eyepod know their market…). Presumably the bifocal glasses will work just as well for Wahoos.

Variations are available in terms of slimmer and lighter lenses – each at an additional cost – but I’ve never once thought I wish these lenses were slimmer. Perhaps that’s because my prescription isn’t very strong.

Whilst we’re talking about prescriptions, I have an odd one. One eye is short-sighted; one long-sighted. The suppliers of the Hawks had no problem making glasses for my gammy eyes.

You can also have an anti-fog treatment applied to the lenses, although I’ve found that the design of the lenses themselves means that they don’t really fog up. More on that below.

I mentioned the visor type things that form the front of the glasses and are the main element that you can see.

The Hawks are supplied with five hard coated, interchangeable lenses

In sunny conditions I mainly use the mirrored lens or, if it’s a little overcast, the aqua blue one. In winter, if I’m mainly focused on protection from the rain, I’ll hit up the clear ones.

The important thing to note, when compared to more expensive single lens sunglasses, is that you can see the prescription inserts behind all of the outer visor lenses other than the mirrored ones. Whether you can live with this is down to your personal preference.

I’ll admit that being able to see the lenses behind does look a bit odd but I don’t mind it personally. I don’t look like a velo god whilst atop my two-wheeled steed at the best of times. A set of slightly clunky cycling specs makes little or no difference.

The advantage, of course, is that you get five different sets of prescription sunglasses for the price of one. And that one price is less than you’d pay for single-skin prescription cycling glasses (which I doubt any veloptician calls them).

I’ve now owned these Eyepod Hawk glasses for the best part of two years. I’ve worn them a lot, including through two winters.

British weather is somewhat changeable, so I’ve had to change the outer lenses for virtually every ride.

Despite the somewhat plasticky appearance, I’ve seen no deterioration

The lens cover change process feels like it would be quite likely to cause damage over time, but hasn’t been the case.

The only damage is that the hard carry case, which is otherwise quite good, has lost its zipper tag.

I’ve already mentioned that the elasticated sports band was crap. I’ve since lost it. Not sure whether this comes under the category of longevity.

As discussed, you can see the prescription inserts in most configurations.

I’ve also alluded to their heavy reliance on plastic. I’d be lying if I didn’t say they looked a little on the cheap side.

How sunglasses look depends a little – or a lot – on the size and shape of the wearer’s heed. I do wonder if the Eyepod Hawks perhaps project a little bit further forward than normal single lens sunglasses.

However, I think the dimensions, or the proportions, actually look quite good with a cycling .

If you have a tendency towards looking like a mushroom when there is a on your bonce, the Hawk glasses may even improve matters.

Worn without a cycling , they do perhaps look a little like you’ve been issued with protective visors after you’ve undergone laser eye surgery. I do occasionally wear the glasses when not cycling but then I have no sense of style. Those that care more about their appearance may elect not to.

In short, they feel good.

The Eyepod Hawks seem fairly lightweight, which I suppose they are.

The arms go comfortably outside the straps (which is of course *very important*).

I tend to tuck the ends of arms just under the inner tightening bit of my . Once done, the glasses feel securely in place and then I forget about them (which in this context is a good thing).

The outer visors provide plenty of coverage across your face and eyes. In bright conditions, it doesn’t feel like light is coming round the edges (is that a thing?).

The glasses provide plenty of protection in the wet. The combo of my lip overhanging my forehead and the large lenses means that rain does not spray into my eyes nor drip down into them.

The Eyepod Hawks don’t tend to fog up in wet conditions (for instance, when you’re sweating on a cold day and then stop suddenly).

Let’s not pretend I have any scientific training, but I think this might be partly down to the double lens design. The inner prescription lenses tend to stay at a pretty constant (higher) temperature, being protected from the wind. When you stop on a cold day, they’re less susceptible to condensation from the heat coming off your face. Fogging can still occur, but it’s less pronounced than, say, cycling in similar conditions wearing my normal day to day spectacles.

The slight downside of the double lens design is that you occasionally get small insects, such as flies, landing on the outside of the inserts, which you can’t easily brush off because of the outer lens. Whilst slightly annoying when it happens, it doesn’t happen frequently enough to register as a full blown cross in the ‘Cons’ column.

How Much Do The Eyepod Hawk Glasses Cost?

The basic single vision lenses version of the glasses start at £99. Bifocals are £129 and varifocals £179.

As mentioned, you can select from a number of slimmer lenses and also apply antifog treatment, which can add anything up to £150 on top of that.

Given the slightly placky nature of the frames, and a look that just about stays the right side of naff, I’d be reluctant to add extra cost for premium lenses.

The Eyepod Hawk prescription sunglasses were an impulse purchase at a cycling exhibition show type thing.

I’ve been very pleased with them. I certainly didn’t expect them to hold up as well as they have.

The glasses look ok and they’re hugely practical. The five interchangeable lenses makes them useful in all ride conditions.

The fact that the Eyepod Hawks weren’t that expensive to begin with means I don’t have to worry about them being damaged or lost (which is an underrated characteristic in my poorly-written book).

All in all, I recommend them to you. Dear fellow cyclist. Amen.

If you want to pick up a pair of the Eyepod Hawks in the UK, the website is at sportsglasses.online. This isn’t an affiliate link – I don’t get anything if you buy a pair.

If you’re in the US, these Tessera90s look like the same glasses. They come with the prescription insert BUT it seems you need to take them to an optician to purchase/fit the prescription lenses:

Please leave a comment if you’ve found other companies selling something similar (er, with where you bought them, what you think of them, etc).