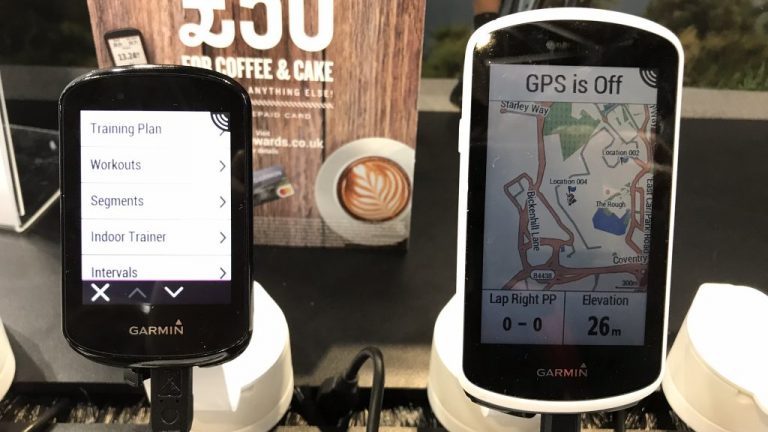 The purpose of this post is to (wait for it…) compare the Garmin with the so you can work out which is best bike GPS choice for you.

(Essentially, is it worth you paying a bit more in order to get the extra 200?)

So we’ll be looking at (and comparing) things like size, weight, the screen, buttons (buttons!), as well as the software features, both basic and sophisticated, so you can decide which bests suits your road cycling needs (whether that’s your actual ones or your perceived, I’m-on-the-verge-of-turning-professional-at-age-45, needs).

Capiche? Alrighty. On with the show!

(Before that though, I’ve written a more recent post comparing the Edge 830 with the Edge 1030 Plus (as opposed to the without the Plus), in case that floats your fancy).

Summary Comparison: Which Should You Buy? So What Are They?

Every time with you people!?!

The Garmin and 1030 are both cycling GPS devices (or ‘bike computers’). The core function of a bike computer, whence attached to the handlebars, is to measuring and record how fast you’re going, how far you’ve ridden, how quickly you’re spinning the pedals.

The GPS bit means that the device communicates, through the medium of magic air wires, with satellites during the ride such that it knows where you are and can record where you’ve been.

This data is then uploaded to Strava* and you are awarded a KOM of the Mountain Segment. Or something.

(* Other ride recording and sharing apps are available… we just don’t approve of them.)

However, for now the 1030 remains a current model. Like all Garmin GPS devices, it has received various firmware updates, fixing bugs (initially) and then, over time, adding new features.

The 830 is newer, having only been launched in April 2019. The previous Edge 820 was launched in July 2016. Based on this, you’d expect the 830 to remain ‘current’ for at least three years (and likely continue to serve all your needs for many years thereafter).

Physically, the main difference is length. With both devices approximately the same width and depth, the 1030 is 30mm longer (to accommodate that larger screen dontcha know)

All of this translates into 54g of weight difference (the 1030 obviously being heavier).

It’s for you to decide whether that weight difference is important. 54g is neither here nor there unless you’re a pro rider with sub-5% body fat (it’s less than the weight of a Clif Bar – other energy bars are available…).

Equally, for many, the larger screen ‘real estate’ won’t provide massive benefit. My smallish iPhone 7 (on which I’m drafting this post) has a 4.7in screen, so the 1030 isn’t huge in real terms.

My bike GPS buying history shows I tend to buy smaller devices (Edge 520, ), which I think look better (rather subjectively…) attached to the handlebars, and then use my phone for larger-screen activities (looking at maps, designing routes, reading the Financial Times…).

With the launch of the (and 530), Garmin introduced a more powerful processor into these newer devices. As a result, the 830 is significantly faster than the 1030 at completing tasks that require a bit of silicon horsepower. Which really means the navigation and route planning.

For most functions (displaying data, recording date, moving through the menus) you won’t notice a difference between the two devices. When it comes to route calculation, whether that’s a route you’ve uploaded from Strava (other – better? – route planning apps are available…) or one you are planning on the device itself, it will be quicker on the 830. End of.

Good news. I can keep this brief. Battery life doesn’t need to impact your buying decision.

Both devices have a claimed ‘up to 20 hours’ battery life.

Another section that doesn’t require many words.

In terms of connectivity – the ability of the device to:

Historically Garmin used to focus only on data sensors that connected via ANT+ (maybe because it owns the protocol). More recent Garmin devices, including the 1030 and 830, now also connect to Bluetooth Smart sensors.

So that’s all good.

Both the 1030 and 830 are touchscreen devices. So you’ll be navigating through the screens, changing settings, selecting routes through the medium of … touching the screen.

No buttons needed (actually not true – both devices have two physical buttons on their bottom edges and one on the side).

Either way, the touchscreen/buttons situation is the same for both units. So not a criteria on which to make a decision between the two.

In other words, you can select an address or a point of interest on 830 or the 1030, and the device itself will calculate a route based on knowing where the roads are and the type of road or cycle path.

If you go off-course, or you want to tack an extra bit onto your ride, the device can be used to re-route on the fly.

The launch of the 830 saw the introduction of ‘popularity routing’. This uses data from all the rides uploaded to Garmin’s Connect ride tracking (and everything else) platform to select roads that are popular with other cyclists (similar to the heatmap feature on Strava). This has since been added to the 1030.

So in terms of mapping functionality, the and 1030 are the same, so nothing to choose between them. However, the 830 does benefit from a faster processor than older Edges, including the 1030. As a result, the 830 is quicker at calculating a route.

Now this is less important if (like me) you still plan to plot routes elsewhere (RideWithGPS, Komoot) and upload or sync them with the GPS device. For these ‘use cases’ you’re not asking the Edge to engage its brain as much.

On the other hand, if you plan to use the device like your car satnav (get in, jam in a postcode (zip code…), set off), then I’m guessing you’ll appreciate the shorter wait times that the faster 830 processor offers.

With the launch of the 830 in 2019, Garmin introduced a raft of new software features that weren’t on existing models, including the 1030.

However, alluded to above, the 1030 subsequently got a firmware update to add said new features (and like all ‘current’ models, continues to get firmware updates from time to time to fix bugs, tweak stuff – you know, techy things).

This isn’t the post to go into all of these funky software features in detail. I’d say the most interesting ones for enthusiastic (non-pro) road cyclists such as me and thee are:

And that’s just a small smattering of what’s available on these feature-rich bike computers. Given that they’re all available on both the and 1030, though, the software features are not a useful basis on which to decide between the two.

In Garmin recommended price terms, the is significantly cheaper than the 1030 (although neither of them are particularly cheap in absolute terms).

Click here to see the latest price on Amazon:

And £150 / $200 is not a small amount, so definitely a factor in most people’s buying decision between the two.

Which One Would I Buy?

From a technical perspective, for my needs at least, the 830 does everything the 1030 can do. With the extra processing horsepower, it’s faster at doing it.

Whilst I have no legitimate need to be more aero, the smaller size (‘form factor’) suits my secret desire to emulate professional riders (and whilst some of them may use it, I don’t recall seeing a pro’s bike mounted with the Edge 1000 or 1030).

The smaller screen size is fine – if I temporarily need a device with a larger screen, there is a more powerful and flexible one in my jersey pocket.

That said, an awful lot of people do like the larger screen on the .

If you’re buying one of these two devices for their smarter, on-device navigation capabilities, there is something to be said for choosing the bigger viewable area, which should make the whole route creation thang a little bit easier.

So, as always, ‘orses for courses. Your mileage may vary. Talk to the hand. Ahem.

Where Can You Purchase The or ?

If you would like to buy either of the Edge devices mentioned in this post, here are the relevant links to Amazon (note: if you click these links and make a purchase, I earn a commission at no additional cost to you):