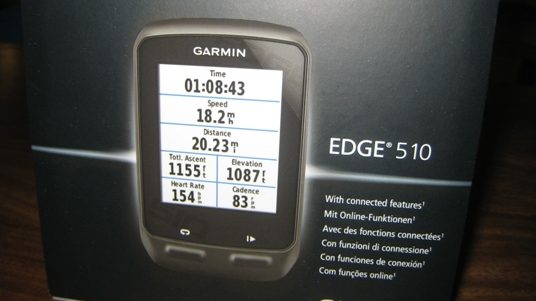 Last week it was my birthday (34th). I was lucky enough to receive a Garmin Edge 510 as a present from my wife.

It would have been spectacular if my wife had selected the Edge 510 without any assistance, or if she had purchased it as a result of reading my Which Bike GPS post.

That wasn’t the case.

I decided to forsake the element of surprise in order to make sure that I got exactly what I wanted, which I did (even if it meant I had to go to the website myself, input my credit card details, and use some vouchers that I received for Christmas).

What is more important is that, in addition to having a whizz bang new cycling computer, I am now able to write a series of posts for anyone who is considering purchasing (or making a birthday request for) the Edge 510.

In future posts I intend to delve into the Edge 510’s many features, and show you how to use them (after I’ve worked it out for myself).

For today though, we’re going to have something of a visual treat as I do a “What’s In The Box?” (is that a thing?) on my new toy. So….

What’s in the box?

Answer: a bunch of stuff.

Obviously the box contains the Edge 510 unit itself and accessories needed to charge it, to connect it to a computer (of the non-bike variety) and to attach it to a bicycle.

In addition, since I purchased the version that comes bundled with a speed and cadence sensor, and a heart rate monitor, these were also successfully placed within the box (they’re good, those Garmin people).

If you want to see what the Edge 510 box would look like if someone placed inside it (and detonated) a nano-sized, smart explosive device that caused no damage to delicate electronic componentry but simply spread the contents of the box out across a kitchen table, then feast your eyes on this:

Thought you’d never ask. Point your peepers at this:

Yes, that’s right, it’s so new, I haven’t even taken off the screen protector.

Actually, my natural tendency (as a Gollum-like protector of precious things) would be to keep the screen cover on, but I’m sure the clever designers would argue that they’ve made it sufficiently weather resistant not to require additional (ridiculous) protection.

Okay, but how big is it? That photo gives us no idea of sca….

Before you could finish asking the question… (I am legend. I am grimpeur. Etc)

Actually, that photo may not be helpful on two fronts.

First, you may not own an iPhone 3GS.

Second, it gives the impression that the Edge is larger than it really is. My reaction on first opening the box (and, indeed, just now when I repeated the experiment for scientific accuracy), was surprise at how small it was.

Despite having handled the 510 before (I had a cheeky fumble at the London Bike Show… and tested out bike GPS devices, yakkety yak), I must have been swayed by other reviews that emphasised the increased size versus its 500 predecessor.

Headline message: it’s really not that big at all.

How does the Edge 510 attach to the bike?

Since Garmin appear unable either to produce a physical manifestation of excessive willpower, or can’t fit it in a small plastic bag, they’ve gone down the rubber band route:

As far as I can work out (since I haven’t yet attached it to my bike), we have two standard mounts (so you can easily switch the device between different bikes) and one ‘out-front’ mount (for those that can’t bring themselves to angle their heads that extra couple of degrees to look at the handlebars).

The standard mounts can attach either to the handlebars or to the stem. The ‘wiggly’ rubber circles sit below the plastic mounts to make sure they don’t move around.

The little loop of string (which may or may not be called a lanyard) looks like it attaches to the 510 head unit to help you to carry it (?!) when it’s not mounted on the bike.

How do I connect the Edge 510 to a computer?

Yes, that is my finger. The black port cover that I am holding back is rubbery and presumably intended to protect the inner workings of the device from rain and cow poo.

Show me the accessories. Don’t make me have to hit you.

Okay, Monsieur Anger Issues (legal notice: not all French people are angry). Here is the speed and cadence sensor:

** Genuinely useful advice alert ** The plastic item in centre foreground and the metal disc on the right are both magnets. The former attaches to the back of a pedal crank (for cadence), the latter to one of the spokes on your rear wheel (for speed).

The magnets, due to some sort of attraction (physics!), have a tendency to stick together, giving the impression that the Garmin people have supplied only one and forgotten the other one. Avoid a panic-fuelled ten minutes of reading and re-reading the fitting instructions, by  being aware that you just need to separate the conjoined magnets…

And here is the heart rate monitor strap, sporting a jaunty press-stud.

I’m not sure there is a great deal more you can say about an HRM strap, witty or otherwise, so I guess I’ll have to move onto the…

So there we have it.

The Grimpeur has concluded the following:

And that is exactly the sort of incisive analysis that you’ve come to expect from this blog.

As mentioned above, I plan to do further ‘in-depth’ posts on how to make the most of your (my) Edge 510. In the meantime, if you wish to compare the Edge against the other bike GPS devices available, why not take a look at my handy Ultimate Bike GPS Guide.

If, on the other hand, you’d like to buy one, you can follow this link to Amazon, which appears to have the best price right now (this is an affiliate link – you can read my affiliate link ‘policy’ here if you wish) .

(* I both acclaim it and am highly critical of it)