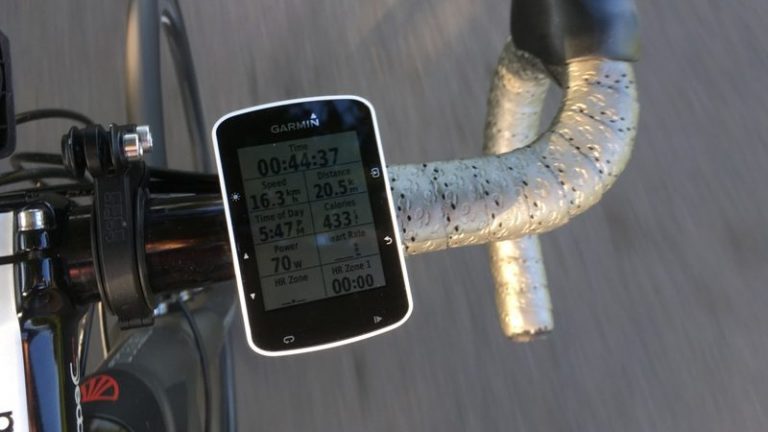 So you’re in the market for a mid-range Garmin cycling GPS device and are considering whether to go for the Edge 520 or the 510?

The purpose of this post is to summarise the main similarities and differences between the 510 and 520, for your delectation. Prepare to delect.

Note: This post contains affiliate links. If you click one and buy something, I’ll get a commission, at no extra cost to you.

Are You Looking For A ‘Current’ Bike GPS?

This blog post was published a few years ago (wow – five years ago). Both the Edge 510 and 520 are now old bike computers (even though I still own a 520 and it works fine). They’ve both been superseded by a newer ‘Edge 5xx’ model.

So, if you’re looking for an up-to-date version of this bike computer, I would recommend the Garmin Edge 530: High performance at a reasonable price. Sophisticated training and performance features. Good for trails and MTB. Not touchscreen. Complex at first but powerful when you get the hang of it. Small greyscale bike GPS with a surprising number of features, including ClimbPro and performance monitoring. Breadcrumb navigation rather than full on-device routing but this is enough for many riders.

Check price - Amazon
If you click this link and make a purchase, I earn a commission at no additional cost to you.

Of course, if you still want to compare these two older models (written in an amusing and engaging fashion), do feel free to read on…

Positioning of the 520 in the edge range

Positioning within the range-wise, it’s somewhere around the level of the 510 (which might have occurred to you already…).

In fact, now that I look at the Garmin website, it looks like the 520 is a straight replacement for the 510. The 510 doesn’t seem to feature there at all.

I’ll deal with price in more detail below, but on an RRP (list price) basis, the 520 is £10 or $20 cheaper than the 510 (for the device only, sans the HR strap and speed/cadence sensor). That said, certainly in the UK, the 510 is available for less, as it’s discounted by Amazon, Wiggle et al.

It’s a GPS bike computer. Next!

Well it’s a little device that you attach to your handlebars (or thereabouts) which displays important information to you whilst you ride (your speed, heart rate, cadence, how far you’ve ridden etc).

Using the GPS gubbins hidden within, it ‘knows’ where you are on the planet at any given time. It uses this information to  track your rides such that you can download (or upload?) them to the computer/app/website of your choice, for later analysis and braggadocio*.

Unsurprisingly, the 520 will perform the core functions of a bike GPS device in much the same way as the 510 (and most other Edges).

Both devices do a very good job of recording your ride information via the magic of GPS and the stream of signals coming in from other sensors cunningly positioned around your bike and your person.

For most (data-interested) people, these sensors might include a heart rate strap about the chest and a speed/cadence sensor on one of your chainstays.

If you’re looking to refute claims that your performance is due to le dopage, you can connect a power meter such that the resulting wattage data can be released to the world’s media.

The 520 attaches to your bike in the same way as all recent Edge units, via the quarter turn mount thingummy. All of your usual Garmin and third party mounts will work.

Something that seems to interest me but very few others is that my Edge 510 uses both the GPS set of satellites and the GLONASS ones.

GLONASS is the Russian satellite positioning system. I think my interest stems from my slight obsession with Cold War era spy novels.

The Edge 520 is smaller than the 510 (in fact it looks to be just a bit bigger than the Edge 500). To my (sophisticated, design-focused) eye, it looks sleeker than the 510. It has less by way of a chunky surround to the screen area. Chunky is (probably) bad to us designer-y types.

Shock horror, the 520 is not touch screen (unlike pretty much every modern technological item, and all of the other recent Garmin Edges). Instead it has buttons on both side edges (har har) and the bottom edge (tee hee).

The Edge 520 appears to offer an improvement on the mapping capability on the 510 (which, I would note, was enough for my needs), but does not go as far as the 800/810/1000. Those latter (larger) models contains maps which the device can read (sort of). It can send you down roads and re-route if you’ve taken a wrong turning. The 510 uses a ‘breadcrumb trail’ (i.e. a line), drawn on a blank background. If you’re luckily, you’ll have uploaded a route file that contains turn direction instructions.

The 520 is like the 510 in that it simply plots (or follows) a line proscribed in terms of GPS coordinates (I’m guessing…), but it has a base map, rather than a blank background. It also has the ability to download third party maps. Apparently the basemap is not very detailed, and the device won’t be able to store the contents of Google Maps, but at least it should give you a rough idea of where you are. Which might be important in your hour of dire directional need.

Differences Right Now (But Probably Not For Too Long)

Here we’re talking software (or maybe firmware, which to me seems largely the same thing).

The 520 comes loaded with a bunch of new features, such as VO2 max estimation and ‘cycling dynamics’, which don’t rely on some particular new hardware in the 520 unit itself. Instead, the (clever) Garmin programmers have simply implemented them as software features.

It’s likely that many of these features (if not all), will find their way to the 510/810/1000 in the coming months, by way of a firmware/software update. Existing owners will just need to connect the device to the computer, using a wire or a -less (i.e. Bluetooth, via your smartphone/tablet) and the update should happen automatically (he says…).

This feature has got me thinking whether I need to update my perfectly usable turbo trainer for one that is at least 2–3x more expensive.

The Edge 520 can communicate with turbo trainers that have ANT+ connectivity in order to adjust the resistance that you’re riding against. You can program in a training programme (using Garmin Connect, or on the 520 device itself) and specify the power output you need to achieve at each point in turbo session.

Essentially, what we’re saying here is that pairing the 520 with the correct (expensive) type of turbo trainer will turn you into a marginally gaining, Chris Froome of a wattage monster.

Most important (for many) will be support for Strava segments right there on your bike computer display.

You can read more detail elsewhere (such as here, on the Strava site), but essentially, Strava Premium users will get an alert as they approach a favourite segment (i.e. one you have ‘starred’ in the app), get motivational messages whilst riding it (“Go faster you fugger!”) and then immediate  feedback on how you did versus your PB, your friends and the KOM/QOM.

Most Important: What’s The Price Difference?

In an earlier version of this post, I did an extensive piece of price analysis showing where the Edge 520 sat in the Garmin line-up, including the 510.

The fact is, Garmin doesn’t really seem to be producing the 510 any more. Perversely, the price of the 510 on Amazon is higher than the newer Edge 520.

So, er, I’d suggest you would want to buy the 520 if price is important to you…

(That said, you might find the 510 available from discount sellers in the future. I believe Aldi, the German discount supermarket with stores here in the UK, was doing a deal on Edge 500s not that long ago…)

Which Would I Recommend?

So, in the older version of this post, I was more balanced in my recommendation. After all, I still have an Edge 510.

But if I was coming to this decision afresh right now, I’d definitely go for the Edge 520.

Hell, it’s the new one. It’s small and pretty. It costs less than the older model!

If you buy through one of the links above, Amazon pays me a commission, at no extra cost to you.