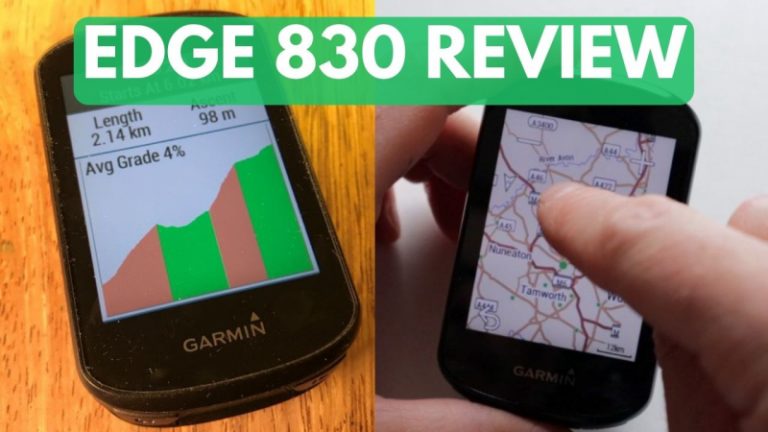 The Garmin is a compact touchscreen bike computer with all the features – navigation, training, safety – that any self-respecting MAMIL (and most disrespectful ones) could need.

But it launched in 2019. Other bike computer kids have joined the GPS block. Is it still worth buying in 2023?

In this post, I will categorically answer that question. Ok, I’ll make a hamsfisted attempt at it.

I bought the 830 after riding with the Edge 530, it’s non-touchscreen sibling, for a few years. I wanted to see whether going button-free (or at least button-fewer) would improve my riding experience. I’ve used it these past 18 months, which I’d say meets the threshold for a long term test.

In this review I’ll give an overview of the device, followed by an ill-informed assessment of what I like and dislike about it, and then brainfart around the exam question: should you buy the now, hold on to your cash, or buy something else?

So What Is It?

It’s a bike computer. It records where you ride. And, as you go about your riding business, it displays various screens of data, mapping and climb information. All in somewhat glorious technicolour.

The design is similar to the Edge 530, certainly in terms of device and screen size.

However, where the 530 has six buttons, the only has three: one on the side (power/sleep) and the two on the front, er, edge (start/stop activity and lap).

This is because, ladies and lycra-men, the has a touchscreen [record scratch]. And the use of said touchscreen replaces, or at least reduces, the need for the physical buttons.

The connects to all the data sensors and other devices you can think of (in the cycling realm – it won’t connect to your internet of fridge). It’ll do both Bluetooth and ANT+. I connect my heart rate strap, various speed and cadence sensors and my Garmin Varia -light thingummy.

I have connected it to my Wahoo KICKR indoor trainer (to see if it works – it does) but I don’t generally use it to control the resistance for my workouts. It’s perfectly capable though.

When you add a new sensor – a power meter, say – the will automatically add a data screen suited to displaying the information from that sensor. Which is nice.

Finally, the has full onboard navigation. You can upload routes to the device and it will recalculate if you take a wrong turn. You can also use the to calculate the route in the first place. Which is also nice.

Where Does The 830 Sit In The Edge Range?

Set up of the was straightforward and intuitive (if I can remember that far back). I just opened the Garmin Connect app and it guided me through the process.

Existing sensors that I used with the Edge 530 were ported across, as were my rider profiles (I think they’re called). As part of this, it transferred across some recent activity data to help Garmin calculate a fitness level estimate on the new device

You probably do need a Garmin Connect account to use the (I’ll admit, since I have an account, I haven’t checked if it’s possible without). But in this day and age, it’s difficult to use any fitness device without opening your email kimono so you’ll have to accept this as a necessary weevil.

Time For Some Analysis

If we can call it that (we can’t). Let’s start with some things I like about the .

Unlike other tech arenas, bike computer manufacturers don’t trip over themselves to describe the inner cybergubbins of their devices. So I can’t tell you which chipset powers the (or if ‘chipset’ is even the right term).

I can, however, confirm that it has sufficient horsewattage to calculate routes quickly and to scroll through menus and screens without any noticeable lag. Zooming in and out of the map is perhaps not latest-iPhone quick but it’s more than adequate.

There’s more of a delay if you’re zoomed right out and fingersqueegeeing around the country. But in the context of a computer attached to a human-powered travel machine, how much country-scale scrolling is really required?

It’s quicker in places than the Hammerhead Karoo 2, when the latter is loading menus, say, or booting up, but this is less obvious in terms of core ride recording and data displaying functionality. The matches the current generation V2 BOLT, which is good because the latter has simpler functionality and doesn’t have to drive a touchscreen.

I like the touchscreen. I like both the fact that it’s there – all else being equal, I prefer touchscreen bike computers to button-only devices – and I like the specific touchscreen on this device.

Using the menus, of which Garmin bestows many upon us, is A LOT easier whence using the touchscreen versus the side buttons on the Edge 530.

And I guess we’re touching on it, so let’s go there, albeit briefly.

We’ve already established that the touchscreen lends itself well to a positive navigation experience. I’ll go todo el cerdo and say that I like the navigation feature on the  punto final.

Navigation on the 830 feels like a feature that has benefited from many years in the hands of consumers in order to iron out all the kinks.

Even though I’ve waxed lyrical about the equivalent feature on the Karoo 2, I still very much like ClimbPro on the .

After uploading a route, the 830 will identify all the climbs on the ride, giving the low down on each.

When you hit the climbs themselves, the Edge displays the dedicated ClimbPro screen with colour-coded elevation chart and some climb stats, the most vital of which is, ‘how much is there fugging left’. I think they call it.

For a rider whose confidence is built on the crumbly foundations of knowing how much effort is still required on a ride, ClimbPro is, for me, one of the ’s top features. And now for some aspects of the where I’m not a massive fan. Or, more correctly, where other bike computers do a better job.

The displays on the V2 (and I’d imagine the new V2 ROAM) and on the Karoo 2 are both better than on the .

The screen is somewhat shiny and reflective compared to the matte displays of the ELEMNT(s) and the Karoo 2.

Colours aren’t as vibrant and the text is less contrasty (unlikely to be the right word).

Also, for some reason, you can’t increase the font beyond a certain size, even when you reduce the data fields being displayed to the absolute minimum. You just end up with a load of unused white space. For those that want to see bigger numbers in addition to kicking out bigger numbers, Wahoo does it better.

As I’ve alluded to, Garmin makes extensive use of menus. And menus within menus. The quickstart pulldown doolally holds a few frequently used options, but the majority of the setting setting is via scrolling through menus.

For me, the Wahoo approach of offloading a lot of the UI to a smartphone app, as well as simply having fewer features, and the Karoo’s dedicated smartphone-like UI are better.

That said, the has a lot of features, so maybe this is another weevil wriggling in the ‘necessary’ bucket.

And, I know, you’re a clever lot. You’ll get the hang of things – it might just take longer than for the equivalent Wahoo-Karoo.

So those are the things I like and dislike about the .

Now. Time for the lycra to hit the tarmac. To stop the whiffling and hashtag an answer to the all-important question:

Here are the pungent considerations that I’ve plopped in my ‘Yes you should buy one now’ cistern:

And here are the negatives that I’ve crimped off into my ‘No, you should wait or buy something different’ bidet:

Obviously my toilet-themed analysis cannot cover all of your life, and lifestyle, circumstances.

All I can speak is my own ‘truth’. I have thoroughly enjoyed using the . I’ll frequently use it on a ride, despite the full girth of other options in my bike computer quiver.

It’s reliable. It’s fast. The mapping is flexible and easy to use on the fly. Sure, there are many menus, but after 43 laps on this planet, I can deal with a bit of scrolling.

Not gunna lie, as my barely legible son would say, I am looking forward to whatever the next generation Edge 8 series will bring. I’ll probably buy it, for clicks and giggles and YouTube views. But in the meantime, I’m more than happy with my 830. If you can pick one up at a good price, I’d suggest you would be too.

With that I’m away. Safe riding, and I’ll see you next time.

I’ve ‘got you covered’. I’ve just published this post in which I pitch the Edge 830 against the Hammerhead Karoo 2, Edge 1030 Plus and the Bryton Rider S500 to work out which is the best value touchscreen bike computer right now (excluding the Edge 1040, at least for now, whilst it’s soooooo expensive).

And I also made it as a video, just in case the written word is all a bit much for you right now…