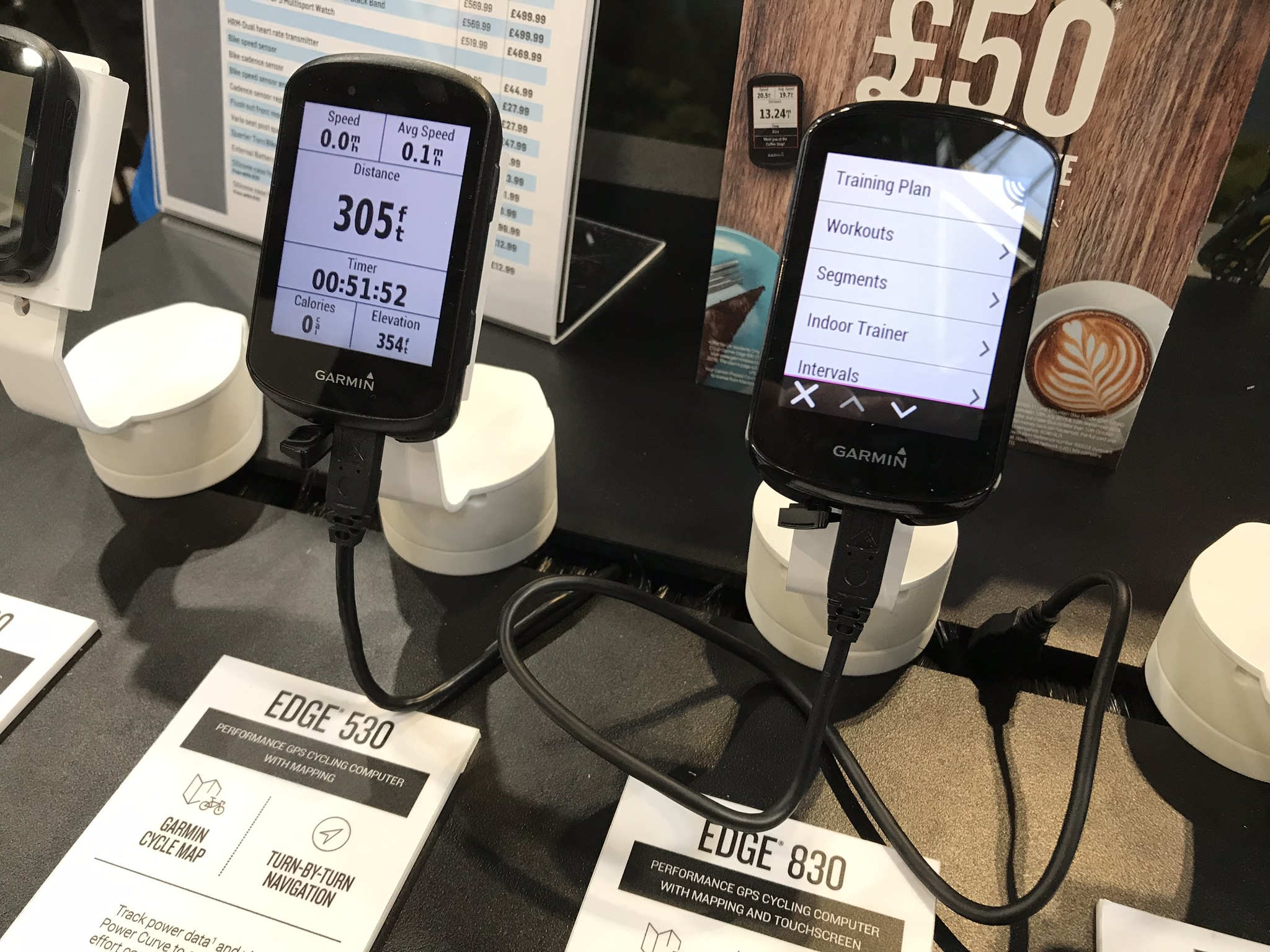 In this superdooperpost, I’m going to canter through a comparison of the Garmin Edge 530 and 830 bike computers.

Garmin is the original OG in the bike GPS market, with many years to hone its product range. The 530 and 830 are two of the most capable bike computers on the market, used by pro cyclists and normal people alike.

But how do they compare to one another? What are the key differences? Which is best for your needs and your pocket?

Saddle up (pardner…?) and let’s find out.

A Word About Model Numbers

The x30 suffix denotes that these devices are the fourth in their respective model ranges (despite the lack of a ‘4’ anywhere in the picture). So the 5xx series started with the Edge 500, the 510, the 520 and now we have the 530.

We’ll gloss over my view that the x30 iteration makes for some pretty ugly model numbers this time round. We’ll also gloss over the fact that I have a view on whether a number is aesthetically appealing…

This particular (hashtag)roadbikeblogger is neither big enough to have Garmin send them to me for free, nor sufficiently awash with cash to buy all of the things.

Don’t cry too much though – I do own three perfectly capable bike computers.

I’m writing this post because I like to do the research (now you can cry for me).

If I do ever find myself in the lucky position of having to decide which bike computer to buy, I want to have all the info at my fingertips. And having done the work, I may as well share it as a blog post for your discernment, delectation and delight (ahem).

So I’m writing this from your perspective (not a pro rider; not a professional reviewer), which you may find helpful. Or not (whatevs).

Both devices are fully-featured GPS bike computers. Their core function is to track and record your speed whilst riding, where you’re riding, how far you’ve been.

They display this information on the screen whilst you’re out on the bike (you attach the device to your handlebars) and record it for your future highly scientific analysis (or maybe mild disinterest) in cycling apps like Strava.

Whilst there are some differences between the 530 and 830 in terms of features, both computers have so many of them, from ‘everyday’ to highly technical, they definitely both fall in the ‘fully-featured’ bucket (rather than the one labeled ‘bog standard’)

What Is The Battery Life?

In real world use, the actual life of the device between charges will depend on how you use it (screen brightness, choice of satellite tracking network etc). Practically speaking, either GPS will be good for a number of rides between charges, unless you’re some sort of Ironman triathlete (in which case I’m not sure you’re welcome around these parts…).

If massive amounts of battery life are your thang, both devices are compatible with Garmin’s Charge external battery pack, which gives an additional 24 hours of life. If you’ve been riding for 44 hours straight, chances are it’s not the battery’s life that you’ll have to worry about.

In absolute terms, the 530 weighs 75.8g whilst the Edge 830 is 79.1g. These are from Garmin’s website (obvs) so are justing talking about the device. You may well buy a protective case (my Amazon Affiliate stats tell me that people do) and you’ll also be attaching a handlebar mount of some sort. These will add a little to the overall weight of the bike.

But as we’ve discussed many times before (yes, many times), these sorts of weights are basically nothing (certainly nothing to worry about) compared to the additional ‘winter cushioning’ that most of us carry at any one time.

So this is a long way of saying that neither Edge device weighs much and there is no point basing your choice between them on this particular criteria.

Both devices employ exactly the same sized screen. For the screen stat fans, that’s 2.6″ colour jobby, which translates to 246×322 pixels.

Which is quite a lot less than your phone (and hence one of the reasons why the Edge computers can manage to record your 100 mile bike ride comfortably, whilst your phone is out of juice at mile 20…).

But the KEY difference is that the Edge 830 employs a touchscreen, where the Edge 530 does not.

So where you would operate around the 830 using the screen, in the smartphone-stylee that we’re all sort of used to, for the 530 you have to use the physical buttons on the device.

All of which means that the 530 has four extra buttons, two on each, er…, edge of the unit. This hardly makes it unusual though, when you compare it to other GPS devices like the and older members of the Garmin 5xx family.

So, in terms of determining the ‘winner’ in this section, it comes down to what you want. If touchscreen is a must have, then the Edge 830 is your gal/guy.

Like most high end bike computers, the Edge 530 and 830 connect with various sensors, secreted about your person and your bike, in order to capture data and display/record it for your delectation.

The list of sensors is vast. It’s easy to get lost (if only you had a device to help you navigate…).

As well as the standard and increasingly-standard sensors (heart rate monitor, speed and cadence, power meter), Garmin also allows you to connect to, amongst other things:

The good news is that there is no difference here between the Edge 530 and 830.

Both devices communicate across all the same channels and protocols (Bluetooth Smart, ANT+ and wi-fi), and they can link up with all the same types of sensors.

So whilst you might not know what a ‘Varia Vision’ is*, you can buy either the 830 or 530, safe in the knowledge that it will connect.

(*It’s a head up display thingummy that attaches to your cycling glasses).

Back ‘in the day’, navigation used to be one of the key differences between Edge 5 series and 8 series computers.

Whilst Edge 8xx computers had the ability to plan and recalculate routes on the device itself (it ‘knew’ where you were and where other places were), the Edge 5xxs did not.

All the Edge 500/510/520 could do is plot a breadcrumb trail of GPS waypoints on top of a (very) basic map image. If I went off course, beyond telling me about it and waving a digital finger in the direction I might like to head, neither my Edge 510 or my 520 could direct me back onto a route.

(By the way, like many riders, I’ve always been fine with this level of on-device mapping. It’s been more than sufficient to get me round countless planned routes.)

The picture changed with the introduction of proper mapping on the Edge 520 Plus.

Nowadays, the difference between the 530 and 830 in this field is less stark.

The Edge 530 contains detailed maps for the region (the continent) where you bought it. Unlike the 510/520, it ‘knows’ where the roads are, and can calculate, and re-calculate, routes around them.

The 830 is the same (as the 8xx series always has been). The key remaining differences are:

Other Features (That I Haven’t Got Around To Mentioning)

Over the years, with each new generation of bike computers, Garmin has added features to its range of Edge computers.

The Edge started as a device that could measure and record your speed and distance traveled. Now it can warn you of vehicles approaching from behind (if paired with a Varia sensor), allow loved ones (and fans) to ‘live track’ you whilst out on a ride, act as a bike alarm and give you weather alerts.

Most importantly, it can tell you when you approach you favourite Strava segment.

And the features above are somewhat old hat. More recent devices have even more whizzbangery jammed into them, with each feature getting its own snazzy looking screen (or a number of them):

No doubt you’ll find some to be useful, some… less so.

The sheer number of these features, not all of which have immediately understandable names, makes comparing the 530 and the 830 a little panic-inducing. How will you know which of these you might need in the future?

I have good news for you then. For the most part, most of these features are the same between the two devices (and both computers tend to receive new ones via software updates, as and when they’re introduced):

I think even the most tech-savvy, enthusiastic road cyclist would be delighted with the sheer breadth (and depth) of features available on both the Edge 530 and 830 devices.

In long, yes both comply with the IPX7 standard, which means it will work when submerged in water in a depth of up to a metre (3 feet, imperialists!). Which to all intents and purposes means it is waterproof on a bike ride. Unless you do your Zwift sessions on the bottom of a reservoir.

Are Garmin Going To Bring Out A New Version?

Whilst quite old in Apple years, back in the real world, they are very much current bike GPS terms.

Clearly I have no hotline to Garmin (if I did, I’d be using it to request review units…) but it feels they work to a cadence (yes, cadence) of model updates every 3 years or so.

Garmin Edge 530 Buy Now
If you click this link and make a purchase, I earn a commission at no additional cost to you.

History shows that I tend to buy the device in the 5xx bracket. My first proper bike computer was the Edge 510. I followed it up with the Edge 520. I also own a , which is Wahoo’s answer to Garmin’s 5xx range.

The one you should buy depends whether the additional features and capabilities of the Edge 830 warrant paying the slightly higher price (no shizzle, Sherlock).

Garmin Edge 830 Buy Now
If you click this link and make a purchase, I earn a commission at no additional cost to you.

For many this will come down to whether you want a touchscreen device or can manage with ye olde buttons. Plus, if you are using the device regularly for ad-hoc navigation to an address, the 830 would be the better choice.

Either way, I’m sure you would be very happy with either device. I certainly would be!