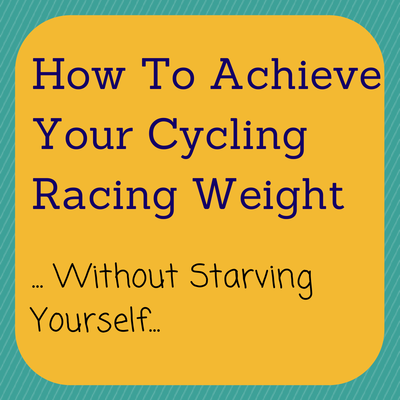 Banal truism alert! Pretty much everyone wants to lose a bit of weight.

Magazines and newspapers of all persuasions are obsessed by the topic. Millions of pounds are spent, lost and gained in the name of shedding weight.

If you’ve subscribed to my blog in the last couple of months, you may remember getting an email asking about your cycling struggles.

After lack of time, and maybe fear of hills, the subject of weight is frequently mentioned. My sense from your comments, though, is that you have a healthier attitude to weight-loss than other sectors of society. Rather than fixating on body image, you feel that losing a few pounds would simply help your performance, both on and off the bike.

And you’d be right.

So let’s do that. Me and you. Starting now.

PS. Read to the bottom if you’re eager to find out my body fat percentage and whether it’s falling…. (now there’s an offer).

As you may already be aware (given I’ve mentioned it in the last 3 or 4 posts), our challenge (yes, our challenge) in July is to ‘get lean for performance’.

My guide in this exercise is Matt Fitzgerald, through his book, Racing Weight: How To Get Lean For Peak Performance, which I devoured recently (and ironically).

I’m going to be sharing what I’ve learnt from Matt’s book, as well as my own experiences (and results) from trying to follow its teachings.

It should hopefully go without saying that whilst I will cover the themes contained within the book, in order to get the full picture, you should really pick up a copy for yourself: 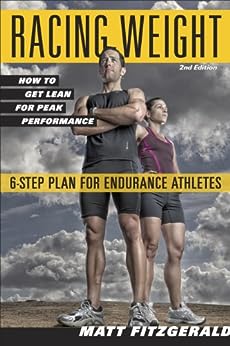 Racing Weight: How to Get Lean for Peak Performance

My favourite book on how to get lean (and look good-ish) *and* perform strongly on the bike. Full of clear, actionable advice.

Rethinking How We Think About Weight

Weight is a key factor that holds back performance, even for novice and intermediate cyclists. It’s most keenly felt when climbing (obviously – you’re having to cart more stuff up the hill than you need) but also has a bearing when riding over flatter terrain.

Being a larger athlete increases wind resistance due to a bigger frontal area. The insulating effect of fat (and the lower surface area:volume ratio) makes it more difficult for the body to keep cool and run at maximum efficiency.

Generally speaking, most people will improve their performance from losing weight.

Despite the presence of ‘weight’ in the title of Fitzgerald’s book, he suggests we should be less interested in weight (within reason) and more interested in body composition. There is no point in lowering weight if the weight lost was formerly muscle, reducing your power output. Your performance will improve if you can lose body fat whilst retaining muscle, thereby reducing the percentage of your body weight made up by fat.

Counterintuitively, the guiding principle behind the Racing Weight system is not simply to reduce your fat percentage and/or weight. Instead, we are to focus on improving our athletic performance. If we do so, through effective training, sensible changes to our diet and careful monitoring, we will achieve our weight/body composition objectives as a secondary (and much-appreciated) benefit.

For me, this idea feels quite liberating. There is something very defensive about losing weight. It’s almost like a game you can only lose.

But like many sportive cyclists, improving my performance is central to my enjoyment of cycling and training. By aligning the diet/nutrition piece to one of my fundamental motivations for cycling, I feel I am much more likely to be successful in ‘getting lean for performance’.

Everything Comes Down To Performance

I admit it. I’m a big kid at heart. Whilst I don’t (yet) trundle around in full Team Sky kit, I harbour the secret fantasy that I am, in fact, an elite rider.

The Racing Weight mindset is how most successful endurance athletes tackle diet and nutrition. They fuel for success. They train for success. Their bodies adapt to both components and, for the most part, they get lean.

The ultimate arbiter of any measure you take to improve your diet is whether your performance on the bike improves. It doesn’t matter whether your optimal body fat percentage is 10% or 20% – is your body fitter for doing the job you want it to do?

Again, this is a liberating idea. There is no need to align yourself with a particular dietary tribe: the zero-carb Atkin-ites, the spear-wielding Paleo practitioners. All you care about is making a series of small improvements to your diet, little by little, slowly compounding. As long as your sporting performance continues to improve, you can be reasonably confident that you’re doing something right.

Wait, I Need Some Help Here!

Don’t panic, Matt doesn’t leave you to run through a series of personal scientific experiments to determine whether you run better on a 100% cabbage diet (rocket thrust!) or raw antelope meat plan (eat what you catch).

The book contains plenty of guiding principles to start from, based on the practices of successful endurance athletes. If the ultimate measuring stick is, ‘what leads to the greatest improvement in performance’, why not start with the methods of those that have attained the very highest levels of performance and work from there?

Anyhoo, I’ll cover some of the improvements you might like to make (and some of the ones I’ve already started to implement) in future posts. For now though I want to cover one final revelation in the book that surprised and encouraged me. Are you ready for this?

There is little evidence to suggest that any one dietary system (Atkins, Paleo, Gurnard) is more effective than the others in leading to long-term weight loss success.

In other words, the two most effective steps that you might take to promote long-term weight loss success (i.e. losing it and then not putting it back on) are:

1. Maintaining a food diary
2. Weighing yourself and measuring your body composition regularly (and doing the same for your performance on the bike)

The former works by heightening the awareness of what you’re eating. You’re more conscious and therefore more likely to make the odd ‘good choice’ that results in an improvement to your diet. You can’t lie to yourself (and others) about what you’ve been eating (unless you deliberately decide not to note down that cheeky donut with your mid-morning coffee).

The latter helps you avoid ‘dietary creep’ – the relaxation of standards that you don’t notice for a couple of weeks, when suddenly your belt feels tighter and you realise you’ve put on half a stone.

Self-measurement: A New Concept For Cyclists (Not)

Fervent non-Strava-novites can choose to disagree, but I hypothesise that most road cyclists like to measure at least some information about their riding: distance, time, height ascended, cadence, cows avoided.

We’re practised at recording stuff, so let’s use and extend the habit to our diet and see what happens.

To that end, I’ve been keeping a food diary. It’s a simple Google Docs… er… doc, that I keep on my phone. So far I’ve just been storing the data.

Racing Weight has a points system for scoring the value of each food item consumed. The aim is to make small improvements to your diet such that your daily score creeps upwards. My next job is to go through the diary, totting up the points, in order to spot the opportunities to ‘level up’ my diet.

Don’t worry, unlike for my 30 Days of Cycling Challenge, I’m not going to force you to read my food diary each day and give me ‘Kudos’ for a particularly well-chosen bowl of steamed spinach.

Secondly, I bought myself a Fitbit Aria, which is a Wi-Fi connected ‘smart scale’ (it measures body fat percentage as well as weight). I thought the Wi-Fi element was perhaps a bit of a gimmick, but in fact turns out to be tremendously useful.

Having set up the scales, and registered with an account on the Fitbit website, all I have to do is stand on the scales for a couple of seconds, and the data gets sent automatically to the ‘cloud’ for Fitbit to analyse and turn into pretty graphs.

Apparently the body composition figures on these sorts of scales can be inaccurate in absolute terms, so we’re more interested in the trend over time.

Here is a screen shot of my body composition chart for the past 10 days or so. Unhelpfully, there aren’t any labels and the scale is a little large. Whatever.

Which, now that I write it, is actually quite encouraging.

We’ll leave it there for this week’s sermon.

Check out the next post in this series where I’ll be looking at the key things to focus on if you want to lose weight by cycling. I’ll look in more detail at the six key steps within the Racing Weight System, and how I’m attempting to implement them

In the meantime, I’m keen to know how you’re getting on in your own ‘Get Lean For July/The Holidays/Good’ challenge. Or have you already used the Racing Weight System to good effect?

Also, if you still need to pick up a copy of the book.

PS. If you like to read (in book format), why not check out my list of top road cycling books.