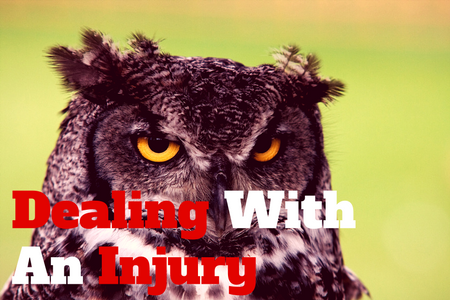 There is a certain sinking feeling when a familiar injury returns. The twinge in my left knee as I get off the bike. The tightness above the knee. That feeling of dread as it starts to seize over the course of the afternoon. The jolt of pain as I walk down the stairs in the evening.

I’m in that place right now with my knee.

I’ve tried resting it (sort of). I’ve tried light training rides. And, so far, the pain doesn’t seem to be going away.

Now I’m getting worried. I’ve got PLANS for this year. I’ve made some commitments to do rides with people and I don’t want to let them down. I need to get my training started.

What am I going to do?

I’ve done ‘cycle every day’ challenges before (for instance here and here). The more recent one started just after Christmas after a ‘successful’ autumn of de-training. I didn’t pick up an injury then.

This time, after just two sessions on the indoor trainer (one of which was outside), and one outdoor ride (which was also outside), the chronic knee pain, which I thought I’d seen the back of, returns. With a vengeance.

I think part of the problem was that I’d still been carrying a little bit of fitness through autumn and into winter. I thought I was quite fit. I didn’t take care to make sure that my joints and muscles were keeping up with my cardio.

Most of my riding takes place outside (that damn weather-beating Castelli Perfetto jersey!). I’m pretty relaxed on them. I get bored on the turbo trainer and tend to push myself too hard. Even if a turbo session is only half the length of an outdoor ride, I probably spend more time in the seated position driving a really high gear.

And my turbo bike is my trusty Dawes. Which is not ideal for reasons I’ll come onto in a moment.

I’m sure the volume of driving I do on my commute doesn’t help my knee either.

What Causes Knee Pain In Cyclists?

It turns out, with a little Google research, that there are many potential causes of knee pain for cyclists (and for other people). I’m not going to go through them all. I’m sure you all know how to search for questionable medical advice on the Internet.

I’m pretty sure that my pain comes from the patella (the knee cap) not tracking properly. This can be caused by tightness in the quadriceps or of the iliotibial band pulling it out of line as you (I) use the knee.

A range of potential weak muscles or tight tendons, in the area around the knee, and further afield, can all contribute to the problem.

One cause, cited by physiotherapists, is a weak core and weak glutes (bottom muscles). A weak set of glutes causes your quads and hamstrings to have to work too hard and the leg not to track correctly around the pedal stroke. All of which can manifest itself as pain in the knee (and my knee in particular it seems).

The more you look into it, the more complicated it all seems to get.

Knee pain often shows up in cyclists as a result of riding a bike where the saddle has been set too low. This results in too much pressure being placed on the knees (and quadriceps) as you drive down the pedals, rather than spinning them smoothly. I’m pretty sure that this was the case for me the last time that I really struggled (whilst I was training for RideLondon in 2013).

My trusty Dawes (now my ‘indoor trainer bike’) was bought in haste as a commuting bike one Sunday afternoon. We’d actually gone into the shop for a bike for my girlfriend (yes, I married her; no, she doesn’t ride bikes much these days… sad face). I received virtually no advice from the shop assistant. I certainly didn’t get a bike fit. I rode the bike off and on for the next 8 years.

The good thing in 2013 was that, when I bought my Trek Domane, which was properly sized in the first place and then tweaked further following a professional bike fit, my knee issues went away almost instantly.

The pro bike fit on my Trek also involved the fitter doing what he could to whip the Dawes into shape (new handlebars, shorter stem). It’s considerably better than it was but still not as good as the Domane.

Following the Trek purchase, and the realisation that bike fit is so important for avoiding injury (as well as riding more quickly!), I thought I’d solved my knee issue. All of which makes the recurrence of knee pain so worrisome. I’m now riding bikes that fit, but still it’s there…

Poor bike fits alone do not cause knee pain. Many of the studies done on cyclists that carry chronic injuries involve professional riders. We can safely assume that they have correctly sized and fitted bikes.

The more fundamental cause of knee pain for me is (self diagnosis alert!) poor core strength, weak stabilising muscles around my hip (if I squat down, my hip goes outwards and my problem knee moves inwards rather than staying in one place as it bends) and flat feet. My hamstrings are too tight. I have poor flexibility.

I am falling apart.

It’s time to work on the root cause of the problem.

So What Am I Doing?

Which is not at all a question I ask myself every day.

What I’m not doing right now is going on the indoor trainer.

I’ve tried to the rest the knee. It’s hard though. Using one’s knee is a pretty fundamental aspect of life. Simply not using it isn’t an option.

Sleeping. Or trying to. It’s not just rest in the sense of not riding a bike that’s important when you have a physical injury. Sleep is required to give your body the down time to fix the problem.

More than that though, more sleep (or better quality sleep, which might include an element of getting more) is really important to replace the psychological benefits that exercising on the bike gave me.

The Mental Aspects of Dealing With An Injury

I’ve actually found it quite hard stopping myself from getting back on the bike. Whilst I think that riding the bike (in the right way) should form part of my recovery, I do want to give the inflammation that is presumably causing the pain an opportunity to settle down.

I guess I should take it as a positive that my riding habits are so ingrained now that I’m not using this as an excuse to pack up the bike until… whenever. That said, I do want to make sure I don’t lose the desire and habit to start riding again.

It’s all too easy to put on a bit of weight, lose some cardio ability, forget the joys of cycling, and suddenly find that the bike has lain dormant for months.

It’s not like I’m targeting a place on the Tour de France but having an injury does cause the occasional worrying thought:

This is particularly the case when it’s a recurrence of an old injury, which felt like it took a long time to sort last time round.

Thinking Outside The Bike Box

This episode has reinforced in my mind the importance of a bike that fits well.

When I had issues in 2013, it was buying my new bike and having a professional bike fit that solved the problem (at least on the face of it), almost overnight.

As I write that out, it is clear now that my knee is telling me that I need to buy a new bike.

Oh, and my knee is also saying that you should get a bike fit.

Whilst ‘I should buy a new bike’ is the answer to most problems, I think in this case that resolving the issue might involve a little more work.

Whilst I’ve paid lip service to my body being a complex interconnected system (it is!), I haven’t being paying enough attention to treating it as such.

I have been feeling knee pain, but I’ve also been experiencing tightness in my hip (I think) as I mount the bike (cocking the leg, as it were). I’ve also had a few sharp twinges in my lower back.

I’ve ignored the unsexy bits of improving cycling fitness for too long.

But it’s the non-urgent important things that are often most vital to business success (or any success).

In the case of cycling, the non-urgent important things are fundamental to building a solid foundation of fitness and, whisper it, allow us to ride regularly and strongly as we get older.

The ‘off season’ (assuming I have an ‘on’ one) is when I should be focusing on strength and conditioning. Fixing some of the underlying issues with my body (although there’s only so many hours in the day).

Whilst there is absolutely no way I give off any impressions other than of youthful vigour, I probably should recognise that I will be 39 in a few months.

And then 40 after that (I think I’ve got the maths right there).

Suddenly the ‘Fast After 50’ book, which I like to think that I reviewed as an act of generosity for others a few years ago, is starting to look a personal instruction manual (and very good it is too).

I’ve been researching exercises to help me stretch my quads and IT band, to strengthen my ass muscles and to improve my core in general. I’ll write more about what I’m doing in future posts (recognising that I am not a physiotherapist nor a doctor).

I’m also thinking again about habit building and how I execute successfully a plan in order to get results over time. I’ve already mentioned how complicated it all seems. There are an infinite combination of exercises I could undertake (or not). A basic plan that gets executed will be far more effective than one that looks amazing on paper but stays resolutely there (on the paper).

The sorts of exercises involved in building core strength and hip-stabilising muscles, say, do not have immediately obvious results. The process will need to have other ways of providing feedback (I’m thinking crosses on a calendar and a commitment not to break the chain).

I will definitely be writing more about instilling basic habits and how we can use them to achieve better-than-basic results. That’s my jam.

Have you suffered from a persistent injury that has kept you off the bike (or stopped you from doing other exercise)?

Is there anything I’ve missed in thinking about rehabilitating my knee or coming back from injury in general?