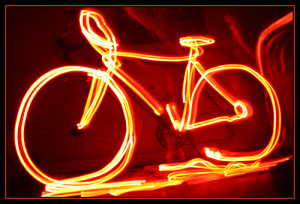 As a Grimpeur Heureux reader, I’m sure you’ve already achieved your optimum cycling body fat percentage, so this post is going to look at how you can make your bike lighter.

Let’s face it, for finely-honed athletes such as ourselves, the weight of our bike (and associated equipment) is the remaining final frontier before we can say we’ve squeezed out every incremental gain going.

My aim is to discover where we can reduce weight, and whether it’s worth doing. So what are our options?

Switch To a Lighter Frame

Carbon and titanium are lighter than aluminium and steel, all else being equal. But not all else is equal. Hence, the endless ‘which is best’ debates.

Generally, in the world of road bikes, if you pays more money, you can expect to get less (weight).

But the thing is, frames impact on your performance due to factors other than weight. These days it’s all about the aero (baby). When it’s not about the aero, it’s about the size and fit.

For the most part, if they’re selling a complete bike, companies will focus on getting the frame right. It’s where the consumer’s eye is drawn. It’s the main thing that can’t be upgraded (i.e then it would be a different bike).

Unless you’re riding an old clunker, it’s likely that the weight of your frame (of the bike!) is going to be pretty well optimised for a bike at that price point.

All of which means that upgrading your frame, simply to reduce weight, is going to be an expensive (and therefore inefficient) exercise.

A more cost-effective weight saving measure would be to…

If a company is trying to lower the cost of a complete bike, in order to sell it at a particular price point, the savings are often made on the wheels.

A pair of wheels won’t elicit the same ‘wow factor’ as the frame when the bike is pictured in a glossy magazine; they’re an easy upgrade (and we can all pretend that the original wheels will become our ‘winter training’ set); and, generally speaking, slapping great wheels on a crappy frame in order to save money tends not to be a sensible commercial strategy.

The other good thing about swapping out your heavier wheels for a lighter pair is that you can bring to bear the magic of physics (maybe – not everyone agrees on its real world relevance).

It takes more energy to accelerate a mass located in the rims of your wheels as opposed to the centre of the wheel (or the frame). So reduce your rim weight and you get a brucie bonus multiplier reduction in effort required to get the bike going.

It’s not quite free money though – heavier rims (or wheels) ‘store’ more energy. If you were to freewheel to a halt, the heavier wheels would carry you further, offsetting the lower energy needed at the start. If you don’t always cruise to a stop (e.g. you’re a prolific abuser of the brake levers like me), then you’ll benefit more from having lower rotational inertia at the start.

And we all like to reduce our rotational inertia.

My bike has Shimano 105 components (other than a cheeky Tiagra cassette). One of the banal statements that gets thrown around for 105 gears is that it’s ‘as good as’ Ultegra, only a bit heavier (that’s assuming you can simultaneously be banal and highly specific at the same time).

But is it true?

Well, yes. Given they don’t do anything radically different, you’d probably expect this. But significantly lighter?

According to Total Cycling, the weight of the 105 groupset (gears, brakes, chain etc) is 183g heavier than the Ultegra set. That is the equivalent of one and a third iPhone 4s. So save £150 (the difference in cost between the two groupsets) and just leave 1.33 phones at home.

Actually, if you are a 105 user like me, the biggest weight saving looks like it would come from switching out of Shimano entirely. I’ll be honest, I don’t know if I’m comparing apples with crankshafts here, but it seems that the equivalent groupsets from Campagnolo and SRAM all weigh less than 105 and Ultegra. SRAM Apex is a full 300g (two iPhones!) lighter than 105. Campagnolo Athena weighs almost half a kilo less (admittedly with the more expensive carbon cranks).

Drill Holes In The Saddle

If you are solely focused on getting the lightest bike possible (and you’re not constrained by the UCI’s minimum weight criteria), you can follow the example of hill climb specialists like Jack Pullar. In an effort to shed every excess ounce, he removed his outer chain ring and front mech, his stem cap, the bottom halves of his handlebars and even shaved down his brake blocks to a mere whisper.

My personal favourite modification is what he did to his saddle.

As you know, this is not something I’d normally suggest. But if you’re really serious about achieving the lightest bike possible, and you’re prepared to lose any semblance of cycling style, then I’m afraid the spokey dokies will have to go.

Please do dry your eyes.

You’ll also get free access to my Sportive Cyclist’s Toolbox, including a guide to completing your first long sportive ride. It was featured on Cyclesport.org don’t you know! Details in the blue box below this post.

8 thoughts on “How To Make Your Bike Lighter”