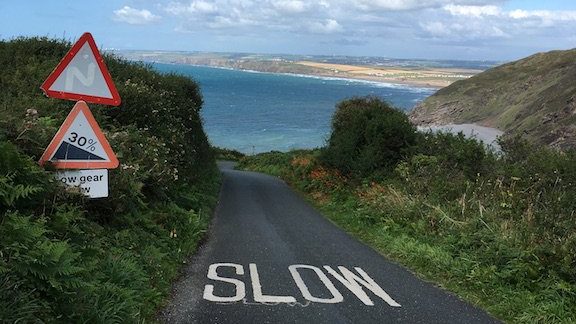 I should start this post by saying that I don’t have a definitive answer for this. I am, however, interested in exploring the question.

Until recently, the question of cycling route design, on a personal level, hadn’t really occurred to me, beyond an ill-formed notion floating somewhere at the back of my mind.

I know that organisers of, say, the Tour de France spend ages determining the specific route each year (although that’s as much about fleecing start and finish towns for cash as it is about making the route interesting for riders and spectators).

I assumed organisers of sportives must give some thought to route (after all, how would they know where to put those little yellow arrow signs).

But when it comes to planning my personal rides, whether solo, with my brother-in-law or as part of my nascent village MAMILpeloton, route tends be decided quite quickly, often on the hoof (cleat?) based on how much time I/we have, how tired we feel, whether its raining.

So, the question again, should we be giving this decision more thought and attention?

The Case For The Prosecution

The inciting incident that has caused this rout-rospection was a recent conversation with Paul Rowlands, organiser of various sportives and cyclo-events in the area around where I live (specifically in Staffordshire – our adjoining county).

Paul’s mission, he said, was to reveal to the participants of his sportives a delicious selection of the hidden gem roads and climbs that he’s explored and catalogued since he was a young whippersnapper.

Going further, his approach is not to select ‘classic climb A’ and then ‘classic climb B’ and then plot a pretty much direct route between them. Instead, he seeks to make all of his routes interesting and varied (and, by extension, avoid long straight busy roads).

Finally, he doesn’t set out to beast the people who sign up for his rides. They shouldn’t fill prospective riders with dread, attracting only the masochists.

Instead he aims for riders to come back with the satisfied legfeeling of having done a ‘job of work’, but still with a bit left in the tank and a desire to come back and do more.

Some of his rides go further than this. One is set up to link together notable Staffordshire eateries, which not coincidentally also act as feed stations on sportive day. But the three themes above sit at the core of Paul’s sportive route design.

The Case For The Application

So how do we make use of these considerations for our day to day ride building?

It depends (always, it depends).

For me, not every ride needs a novel route.

Sometimes my window of ride opportunity can be just an hour. In those cases I don’t want to myfanwy around wasting valuable decisions (I can only make a finite number in a day) and time.

I have a stock local loop that ticks all the boxes (it takes an hour, quiet roads, relatively mud free). No design required.

When do I consciously take time to plan a route then?

Now I think about it, I have enjoyed planning routes when I have visiting cyclo-friends or velo-tives (now there’s a new word that I hope I’ve just invented).

Most of the time, I’ll be riding with said regional interloper. Sometimes (if it’s my brother-in-law), I’ll plot a route for them to ride solo (and even go so far as to load it into their Garmin).

I guess the first factor is to think about is fitness and ability, including my own.

To Paul’s point, there’s no point me planning a route for someone that will make them thoroughly miserable or which they’re simply unable to complete. Much as it’s tempting to throw in all my pointiest climbs for those southern flatland folk….

But I do like to put in a bit of climbing. If people are visiting the area, I’m not going to have them crisscrossing the rolling farmland around my house. They’ve come for the hills (whether they know it or not).

So I’ll aim to hit a couple or three of my favourite climbs, ideally in some sort of logical order. Then we’ll wendle between them on some quiet country roads, so that we can have a chat.

Ride To Fuel or Fuel To Ride

If me and my guest have the luxury of a bit of time, then next on the list, after the climbs, is a suitable cafe stop.

Unfortunately I haven’t had the opportunity to build my own brain-based cafe-wiki for cycling-friendly coffee stops. Most of my cafe rides (i.e. the relaxed sociable ones) don’t often include, er, cafes.

Off the top of my head (for the eight or so of you that are reasonably local), I do like to stop at the cafe in Tissington (this also works if you’re, whisper it, not road cyling and instead riding up the Tissington Trail).

I’ve also been known to stop at the Carsington Water visitors centre where, in addition to seeing how poo gets processed (the reservoir is owned by Severn Trent Water and they have this weird little exhibition involving rats, sewers and nappies), you can sit outside at the cafe and gaze ’pon the water.

And… actually that’s about it. There are nice cafes in Ashbourne, some of which serve excellent coffee. I’m pretty sure I’ve seen cyclists at them. Never done that meself though.

It rather seems like I’m in the market for a few good Peaks/Derbyshire/Staffordshire cafe stop recommendations, if anyone has any?

Potential ride conditions have to play a part in selecting a route. Certainly in terms of deciding the general area to ride.

It’s hardly like I live in the Alps, but there are certainly cases where there is snow on the roads up in the Peaks but it’s clearer down here in the lowlands.

More likely the issue can be wind. A recent ride (which, yes, my brother-in-law had planned) in our Yorkshire trip after Christmas was delayed because the wind was gusting 40 or 50mph even at my parents house. We had no desire to be blown off the road up in the Yorkshire Dales, our intended destination.

We amended the route to somewhere less exposed and went later in the afternoon (my daylight-extending new bike lights helped here).

It’s not just the primary meteorological factors that can guide route selection. The mix of wet weather and tractors can turn some of our local lanes into little more than muddy tracks.

Similarly, some roads have puddles that are potholes (that are puddles). Who knows what wheel-crunching joy lies beneath those murky waters.

I’ll tend to avoid these sorts of roads during the winter months (though I can’t be too stringent in enforcing this rule, or my only route would be up and down the hard shoulder of the A50).

I’m not really a driven kinda guy (you’ll have noticed). I don’t have an overwhelming urge to complete a high profile and time consuming challenge.

I do however quite like ticking off ‘100 Greatest’ climbs when the opportunity presents itself.

If I’m planning a route, for me or others, and we can slot in a climb from the list (so I can mark it off in the book), I’ll generally pencil it in.

The windy Yorkshire Dales ride I mentioned above was going to do just that (though as I wasn’t the route architect, I can’t remember which one it was!).

Even if there’s no ‘100 Greatest’ climbs on the docket, sometimes I’ll make a particular climb (a longer one or a particularly hard one… or both) the centrepiece for the ride.

Whilst we have (so-called) ‘100 Greatest’ climbs, the UK isn’t blessed with many ‘must do’ ascents with global cachet. Maybe a few in the Lake District and Scotland. When I’m near one, I’ll try to bag it.

On a family holiday to the Lakes few years ago, I took my bike in order to tick off something with vertical challenge (Honnister Pass and Whitlatter Pass, thanks for asking).

Around London, cyclists will make an ascent of Box Hill the main reason for a ride and then build a route around it (the primary reason for RideLondon existing perhaps).

Which reminds me, if there are few notable climbs, there are even fewer stretches of smooth UK tarmac around which to build a route. Box Hill meets that criteria as well.

It’s All About The Distance

Sometimes planning a route is about hitting some arbitrary measure. A total distance, or time in the saddle, or metres climbed.

I’ve tended to plot this sort of route when I’m proving to myself that my training is on track.

A hilly-ish 100k ride at some point in June last year suggested I was on course to get round RideLondon at least.

Or maybe you just want to prove (to yourself?) that you can complete a ride with 2000m of climbing.

Less finesse is required for this sort of route design. It’s more about dropping the markers on RideWithGPS until you hit the magic total than crafting a fine balance of interest and challenge.

After having said I don’t give route planning much thought, I spend some time writing about it and suddenly discover I apply more brain cells than I previously assumed.

How do you plan your routes? Are they solely a means to a training end? Or is it more about the journey than the fitness gain?

Let me know in the comments below (please…)

3 thoughts on “How To Plan A Great Road Cycling Route”