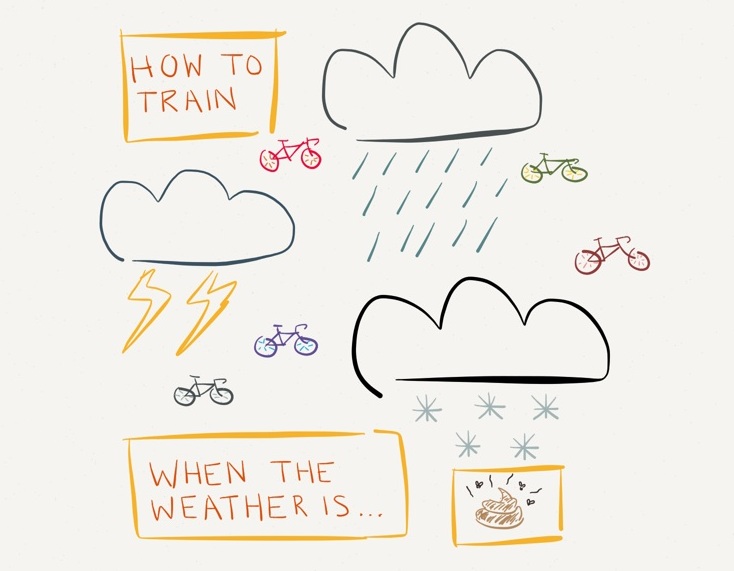 Presumably this is some sort of early New Year resolution (plus I’d just received a pair of clip on mudguards for Christmas – I needed to show some gratitude).

It’s just before lunchtime but it may as well be evening. The only thing greyer than the sky is the sullen look on my face. It’s a busy road and I’m regretting not having brought my bike lights. I’m barely visible to passing drivers, their wipers running full speed.

My glasses are fogged on the inside, drip-covered on the outside. I’ve resorted to contorting my neck and eyeballs to look out of the side of them. Since I need glasses to see, this is hardly ideal.

The ride’s crowning glory comes just 10 minutes from the end, as I ride into my home town. A jarring blow to my front wheel, felt from my forks to the top of my sodden neck, signals that the puddle I was unable to avoid contained a pothole.

I’ve only had this new set of wheels for two weeks. The chances of them still being round after this ride are about the same as being in a position to win the Paris-Roubaix one day classic in 4 months time.

I fall to my knees, hands flung to the heavens, icy rain mingling with salty tears*.

There Is A Better Way Than This

Despite what this somewhat embellished trip down memory lane suggests, I’m a wuss. A glorious wuss.

Riding outside in a howling gale, rain slicing across my face, is not my idea of fun. If I have a planned ride, and there are no other factors encouraging me to get out there (riding with friends, I’ve paid to participate in a sportive), it’s more than likely I’ll just sack it off.

Perhaps you’re scoffing at my lack of mental fortitude. Fair enough. But you should be aware that there is a potential risk to playing the strongman and riding regardless.

Your risk of injury increases. Speaking from personal experience (which I accept is based on a sample size of 1), the ride I described at the top of this post was one of three wet rides in a week – I’m pretty sure that riding in such miserable conditions exacerbated my knee problems (although the underlying issue was due to a poorly-fitting bike).

The risk of taking a spill increases as well. In wind and rain you need to take care. If there’s likely to be ice, you’re better off not going out.

So when the weather turns pants, what are your options? Here are a few alternatives to a rain-sodden ride:

For the unacquainted, a turbo trainer is a device that you use to ride your own bike without going anywhere.

Most turbos involve you clamping your bike into a triangular-shaped frame, with your rear wheel resting on a roller (which may or may not be the right term) at the back. As you pedal the bike, the roller provides resistance, mimicking that which you would feel on a road.

I’ll deal with different types of turbo trainers in a future post (in case you were starting to worry). In the meantime…

The advantage of a turbo trainer is that you can set it up wherever there is space for your bike. Since this can be inside, you don’t have to don your winter apparel. You can rig up your laptop or iPad (other tablets are available) in order to watch soap operas or motivational videos of famous Alpine routes; you can listen to self-help podcasts on your phone.

For the more seriously-minded athletes among you, training on a turbo allows you to have total control over your session. You can sprint for a set number of seconds without having to slow for an approaching junction; you can ride at your ‘threshold’ until you’re close to blacking out.

For the less seriously-minded, riding on the turbo can become quite boring, quite quickly (hence why people resort to televisual distraction).

The other thing, if you plan to set the turbo up inside, is that you’ll need to keep your bike quite clean, if you’re also using it for dirty outside rides (not that sort of dirty, mother).

Rollers are like turbo trainers for the clinically insane.

Instead of being firmly clamped in to a stable frame, you ride freestyle over a set of three glorified rolling pins, attempting to keep your balance.

You might assume from this description that I’ve never tried them. You’d be right.

I believe the pros and cons are similar to those of the turbo trainer, with the additional ‘con’ of having the potential to break your wrist whilst cycling into the living room wall.

Maybe the added frisson of danger makes for a more exciting session, and less need to distract yourself with a classic episode of Bergerac (a reference that will be lost on anyone not British and over the age of 30).

I don’t have a gym membership, mainly because I can’t afford one (plus I doubt they would let me bring my two-year-old along to spot me on the bench press machine).

When I did have a gym membership (back in the mists of employment), I used it for showering and getting changed after my commute, power lifting and for the occasional spin class. Without the power lifting.

If you do have a gym membership, and the spin sessions are free or not excessively expensive, they do make for an excellent, focused session of high quality training. It’s difficult not to be motivated by the screams of an overexcited instructor, urging you to dial up the resistance for the next sprint interval.

Alternatively, you can do a session at your own pace on one of the exercise bikes. Whilst most exercise bikes do have preprogrammed training sessions (intervals, ‘hills’ etc), I’ve tended to find that the sensation when using them distinctly different from riding an actual bike.

The exception to this (which admittedly I haven’t tried) is a Wattbike – these are meant to mimic much more closely the riding experience (as well as recording how much power you’re generating as you ride). If your gym has these, then you’re very lucky indeed.

Finally, you can do exercises which don’t involve a bike. These might take the form of resistance exercises to build strength in your legs and core (which would hopefully translate to better performance once you return to the bike), or can be something entirely different.

I’m partial to a bit of parkour. Which isn’t really allowed in gyms.

Outside (Just Not On A Road Bike)

If you are made of ‘sterner stuff’ and insist upon riding outside, you might want to consider removing (or at least reducing) the chance of being hit by a motorised vehicle from the overall risk casserole.

Time to break out that secret mountain bike (or not-so-secret hybrid commuter) you keep locked in your shed and spend some time riding off-road trails.

These don’t have to be (radical) black grade singletrack (mountain bike term – I had to look it up). Dude.

In the UK there are plenty of bridleways and converted former railway lines to ride along. A good place to start is the Sustrans website, which has a map showing all of the national cycle network. Much of this is off road (or at least on quiet roads).

Which your other half will recognise by its other name, a holiday.

My ‘foreign training camp’ last July (in Mallorca or Majorca, depending on your persuasion) did wonders for my RideLondon training. In fact, given how little I’d been able to train during May and June, it probably rescued my preparation entirely.

I appreciate that this is an expensive option, both in monetary terms and the potential cost imposed upon the health of your relationship. Your partner may not appreciate being left to their own devices for 2–5 hours a day whilst you do interval training with Team Sky*.

(* You should of course sell it as a benefit: a morning of unabridged tranquility in which to sip lattes and tackle that much-anticipated novel that’s been sat on the bedside table since Christmas. Or something.)Oh yeah. Do make sure the weather in your proposed foreign training camp is going to be better that back home.

Which does exactly what it says on the tin.

In order to give the suggestion that the decision not to train is a conscious one, aimed at improving your performance in the long run, I’ve cunningly added the word, ‘strategic’.

Now you can sit back, pop on a retro cycling cap at a jaunty angle, read a copy of L’Equipe and drink a strong espresso or eight. Great session.

Until next time, safe riding.

14 thoughts on “How To Train When The Weather Is … Shizzle”