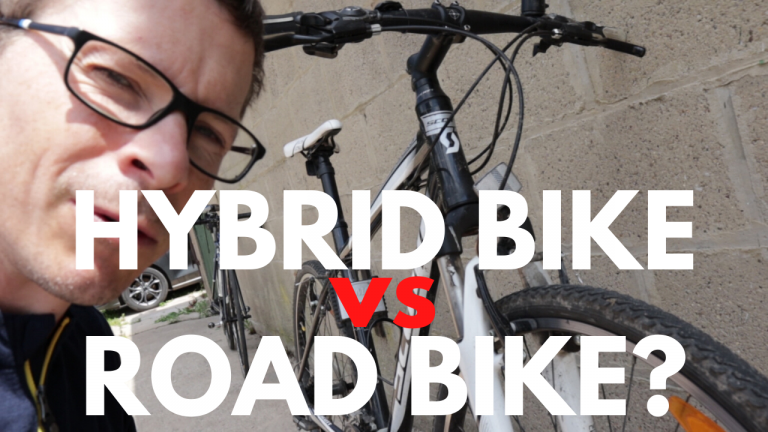 Some experienced cyclists might scoff at this question (though surely not you, noble reader of Sportive Cyclist). I think it’s a perfectly valid one.

I haven’t done a survey (perhaps I should), but I can’t imagine many prospective sportive cyclists wake up one day, having not ridden a bike in 20+ years, and think, ‘I must sign up for a sportive,’ and, while they’re at it, ‘I must buy a shiny, narrow-tired road steed‘.

Many people may own a bike already, perhaps for commuting or for family cycling activities, and there’s a fair chance that this is a hybrid (or perhaps a ‘roadified’ mountain bike – fitted with less knobbly tires etc).

For those that do awaken having undergone a cycling epiphany, they’ll generally seek to buy one bike to satisfy their new-found pedal-powered needs (bit of commuting, bit of child-seat lugging, bit of fitness riding). A hybrid-for-all-seasons might prove a tempting prospect.

(Of course, then they buy it and immediately the Pandora’s box is opened and they become subject to the one bike ownership formula to rule them all.)

I knew a girl at school called Pandora. Never got to see her box though – Spike, Notting Hill

I Made A Video On This Topic!

And here it is. All the key differences between a hybrid and a road bike, all wrapped up in a tasty morsel of moving pictures:

Are You Looking To Buy A Road or A Hybrid Bike?

Well, you’ve come to the right place for some useful links!

Note: these are affiliate links. If you click and buy, I will get a commission, at no extra cost to you.

So, What Are You Saying, Can I Use My Hybrid?

I’m prepared to bet the princely sum of twenty guineas that someone (indeed, many people) on a hybrid bike beat my time at RideLondon 2013, despite the fact I was riding a ‘sportive-specific’ road bike.

An esteemed reader of this blog, Kristian, has even done the Étape Du Tour on a hybrid bike and claims to train by doing laps around Richmond Park with a big bag on his rear rack (note: not a euphemism).

The thing is, in using a hybrid, whilst you’re potentially saving money, you are doing so at the expense of making your sportive ride more challenging. And if you’re anything like me, doing a sportive on a well-fitting road bike is challenging enough, thank you very much.

So, you ask, what is it that makes a road bike more appropriate than a hybrid to the sportive cycling task?

Patience, grasshopper, I’ll get round to that in a second. First…

What IS A Hybrid Bike?

Hybrid: (Noun) 1. The offspring of two plants or animals of different species or varieties, such as a mule; 2. A thing made by combining two different elements.

So, a hybrid bike is the result of a mummy road bike having a little ‘how’s your father’ with a daddy mountain bike.

The resulting offspring inherits the flat handlebars and gear shifters from the mountain bike (plus a little of the sturdy construction). From the road side, the hybrid bike will tend to sport a pair of smoother, tarmac-suited tires and the odd svelte line here or there.

Not all hybrids are created equal: some will be closer to the mountain bike end of the scale; some will be a bit more like road bikes. For instance, my hybrid bike (purchased more as an accessory to a newly-acquired child’s bike seat, than for its own merits) sports a pair of low quality (rarely needed, heavy) set of front suspension forks.

The Differences Between A Hybrid And A Road Bike

As we’ve said, there is no such thing as definitive hybrid bike. Hybrids exist all along the road-mountain continuum (technical term, no need to look it up).

Also, some of the following ‘differences’ are more a result of hybrids tending to occupy a lower price point than many road bikes. For instance, if a £3,000 hybrid bike is available (I assume there is, somewhere), then we can assume it would be pretty close to the weight of an equivalently-priced road bike.

Whatever. Let’s get on with the crass generalisations.

As I see it, the main hybrid / road differences are as follows: 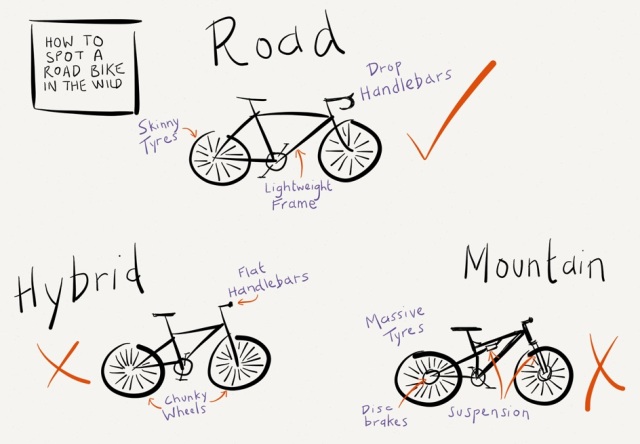 For an equivalently-priced model, the hybrid will weigh quite a lot more (certainly at the lower end of the market). They tend to use heavy chunky frames and heavy chunky wheels. Budget that might be used on lighter versions of these elements, is used up on non-useful components (to the pure roadie) such as a suspension forks.

The seating position on a hybrid is more upright than even a sportive-type road bike (which will have a more relaxed upright position than, say, a time-trial bike). Over the course of 100 miles, being in a more purposeful position, reducing wind drag can lead to a much easier ride (and faster time).

Perhaps the most obvious difference to the casual observer. Road bikes tend to have drop handlebars. The handlebar starts out (in the middle) in horizontal position. Then, at the end, it curves forwards and down in a loop (I suggest you look at a photo in order to supplement my woeful powers of word-description).

There are three different hand positions on a road bike: on the brake hoods; in the drops; ‘climbing mode’ (in the middle of the bars). You have more flexibility to change for different jobs and to stay comfortable. If you want to get a wriggle on on a flat section, you can get into the drops and reduce your aerodynamic drag, then move back to the more comfortable position on the drops)

If there are more components on a hybrid bike versus an equivalently-priced road bike (e.g. the aforementioned suspension forks) then it follows that what components are there will have to be of a lower quality (and price) in order for the bike-maker’s sums to add up.

The gears on a road bike, particularly one aimed at sportive riders, will have the right ratios to make ascending Leith Hill and Box Hill as painless as possible, whilst still have sufficient gear ratios available in the big ring to reach warp speed on flat and down hill sections. With hybrids, the ratios may be suited to flat city riding (with the caveat that gearing will vary from hybrid to hybrid).

There’s no getting away from it. The sorts of sportives we’re interested in take place on roads. Long rides on roads are best undertaken on a road bike (and ideally one suited to sportive riders).

As you delve into the differences between a hybrid bike and a road bike, what you’re really exploring are the changes that have been made to a road bike to make it less suitable for out-and-out road cycling. A hybrid bike will always be a compromise between competing demands on the bike’s abilities.

That all said, you should definitely feel comfortable using a hybrid if you already own one and you want to try a first sportive on for size. If you have the budget for one bike only, and you need it to perform a variety of more practical duties, as well as the odd sportive, then a hybrid is a sensible choice.

If you’re serious about participating in sportives, and generally undertaking long road-based bike rides, and have the available funds, then investing in a road-specific bike is going to pay serious dividends.

Until next time, safe cycling!

37 thoughts on “Hybrid vs Road Bike: What Is The Difference?”