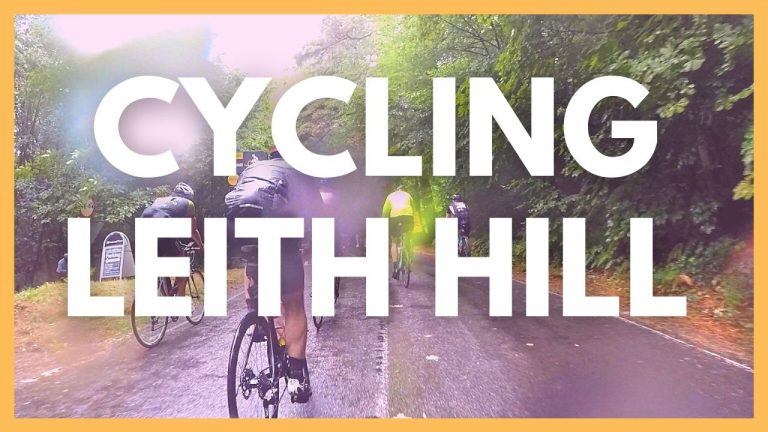 In this post I’m going to look at Leith Hill as a cycling route. As well as discussing its ‘vital statistics’ (length, gradient, elevation), we’ll talk a little about how to get there and how it might fit into a longer ride in the area.

*** If you found this post because you’re looking for information about the RideLondon 100 sportive, then you might like to check out the RideLondon section of this blog – all my RideLondon posts (route, experience on the day, etc) all in one place – click here to take a look ***

Known to Surrey cyclists for years, Leith Hill entered the consciousness of the British public at large (well, those with a passing interest in cycling) as being a major feature of the inaugural 2013 RideLondon-Surrey 100 sportive and the associated professional race.

Many first-time RideLondon participants seem to have considerable trepidation about the Leith Hill climb. But are those fears justified? Let’s take a look.

Where is Leith Hill?

As hinted at above, Leith Hill can be found in Surrey (England…). It is approximately 25 miles from central London, as the crow flies. In the RideLondon route, Leith Hill occurs at around mile 55 (after the Newlands Corner climb, but before Box Hill). 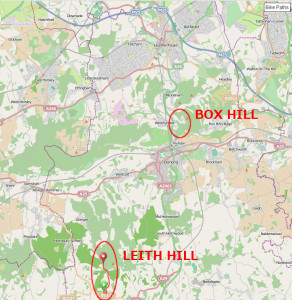 Generally the hill is climbed from the south. This is the route described in Simon Warren’s 100 Greatest Cycling Climbs book and the direction taken by RideLondon. The route from the south is steeper and narrower. Having 15,000+ RideLondon riders descend the wider road northwards is a lot safer than the other way round.

Here is the climb plotted in detail: 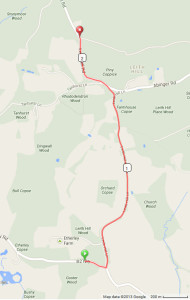 You’ll see I have the climb starting on Ockley Road. This is because there’s around 10 metres of climbing there before you turn left onto Etherley Hill and start the climb proper. This is where RideLondon approaches from.

Alternatively, if you want a slightly longer climb you can start further south on Mole St before turning left onto Ockley Road (which bears due north) and approach the Etherley Hill turn off from the other direction.

I doubt there is an official arbiter that determines exactly where Leith Hill starts and finishes, but I’m sure there are 10 or so good amateur riders who are pretty keen to go with my route (as you’ll see below).

The summit of Leith Hill (can a hill have a summit?) is the highest point in Surrey, standing 294 metres above sea level. The road (and therefore the cycling climb) doesn’t go right to the top, instead reaching 203 metres. It’s high enough though to get a bit of a sweat on.

Approaching from the south, your starting altitude is 52 metres, making the total height ascended 151 metres (or 495 feet, if you’re imperially inclined).

The length of the climb is approximately 2.3 kilometres (1.43 miles), starting from the point on Ockley Road at which the tarmac first starts to rise.

According to Veloviewer, using Strava data (which, itself, probably takes mapping data from another provider), the average gradient is 6.5%, with a maximum of 12.4% (occurring around 1.5km into the climb I think).

Here is a very cool chart, courtesy of Veloviewer: 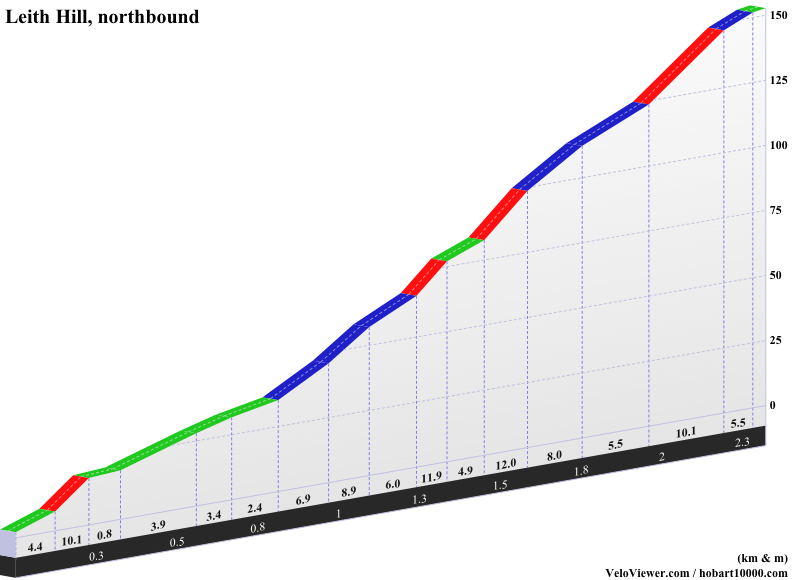 How Long Does It Take?

At the time of writing, the Strava record for the “Leith Hill (northbound)” segment stands at 6 minutes 4 seconds (representing an average speed of 23km/h).

I’m delighted to say that my current record, set whilst doing RideLondon (like a lot of the times on the leaderboard), is 11:12 (a slightly less impressive 12.4km/h).

So it’s a relatively short amount of pain (if that’s what you’re worried about).

The reason amateur cyclists might prefer ‘Leith Hill (northbound)’ to become the official Leith Hill Strava segment is that the pro race that followed RideLondon blitzed the leaderboards of other versions of the climb.

Geoffrey Soupe (pro cyclist for French team, FDJ), currently tops the leaderboard for the ‘Leith Hill (100 Climbs)’ segment, in a time of 4:52 (an average speed of 25.3km/h).

Luckily for the amateurs, the pro race approached the climb from the south and therefore did not register the segment starting to the west on Ockley Road.

Which Sportives Use It?

As mentioned, Leith Hill is most notably a feature of the RideLondon sportive. You’d expect it to remain so, given the hill’s ‘iconic’ status in the south east and unlikelihood that the RideLondon route will be changed each year (for such a large closed-road event, presumably the organisers will want to stick with what works).

Any Pro Races Use It?

As mentioned above, the RideLondon-Surrey Classic climbed Leith Hill in 2013. It looks from the website as if the same route will be used in 2014 (albeit the link goes to a 2013 pdf map).

The 2013 Tour of Britain also went up Leith Hill as part of the Epsom to Guildford stage. Amateur cyclists can breathe another sigh of relief that the pros will, again, not approach from the west on Ockley Road*. The segment remains in non-pro hands (for now…).

* In fact, the ToB route doesn’t really climb Leith Hill as such. The climb is actually to Coldharbour to the east (where the King of the ‘Mountains’ points are awarded), after which the road traverses the contours (in a fashion) to join Leith Hill Road pretty close to the top.

How Do I Get There?

Would it be impertinent to suggest that you get there by bike? It would? Ah.

Leith Hill is situated in an area that is generally good for cycling. The terrain is varied. There are plenty of quieter roads. If you’re coming from central London (or the suburbs), I’d recommend using a car or the train to get close to or outside the M25.

You can get the train to Dorking and do a loop from there, including an ascent of Box Hill as well.

Whilst we’re on a Box Hill tip (like a ragga tip, but different), if you’re driving, you could always park in the National Trust car park at the top. Then you can do a loop something like the one shown on the map below, ending at the NT cafe for coffee and cake. Perfick. 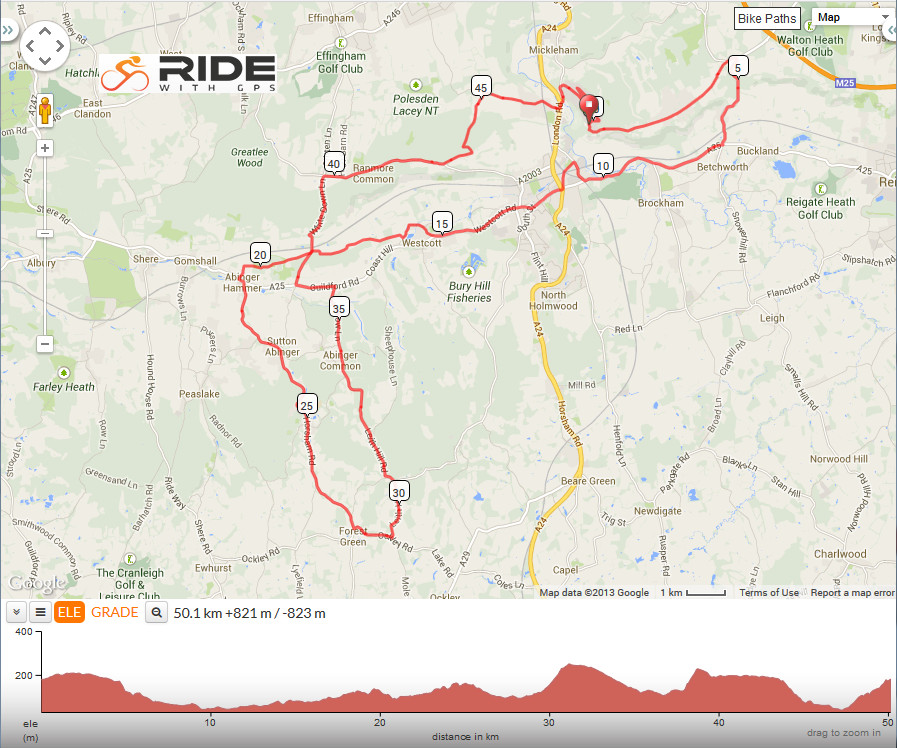 Here is a link to the route in RideWithGPS, if you want to play it.

Are You Doing RideLondon?

Then you may wish to watch the YouTube video I created that talks in detail about the RideLondon route, and specifically the climbs (including Leith Hill).

There is even some in-race (er, in-ride) footage of the Leith Hill climb.

Enjoy, and consider subscribing for more of the same 😉

In the run up to RideLondon a lot of people seemed very worried about Leith Hill. After I rode it for the first time, I wrote this post to put people’s minds at rest (at least about the climbing).

Leith Hill isn’t a difficult climb. With a bit of training and appropriate gears (I’m a big fan of compact chainsets), you shouldn’t find it a particular problem.

If you’re looking at this post because you’ve signed up to RideLondon and you’re nervous about what it entails, here is my 4-step recommendation:

2 thoughts on “Leith Hill Cycling: Gradient, Elevation And All That Fandango”