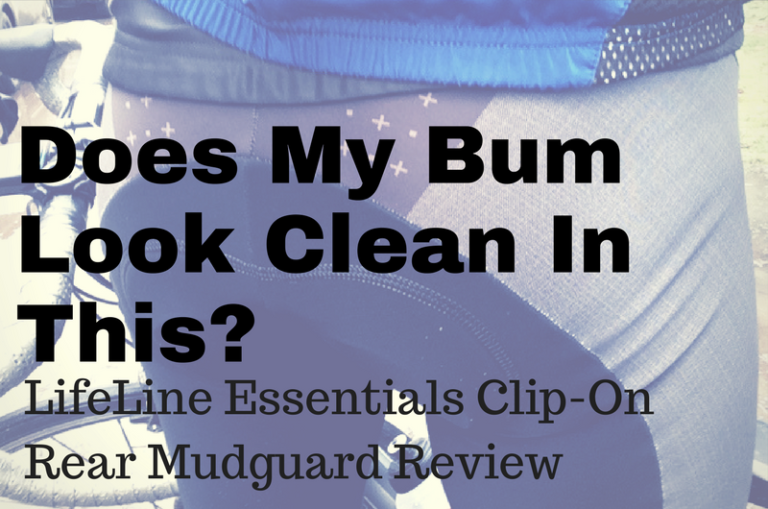 I’ve had a revelation. And it involves my arse. By way of explanation, here is my review of the LifeLine Essential Clip-On Rear (Fender).

As a result of being a bit more committed to riding when the weather is filthy (partly in order to find opportunities to test high performance outer wear), I’ve tended to return from rides with mud and ‘road juice’ sprayed up my back and my backside.

I think US readers may refer to this as the ‘buttside’, but I am not sure.

Whilst I’ve been good (“good girl Daddy” as our youngest proclaims) at rinsing down the bike after each ride, it isn’t ideal having megatons of megacrud splatter-gunned all over the rear, whether it’s mine, or that of the bike.

Quick note: This post contains affiliate links. If you click and buy something I get a small commission, at no extra cost to you.

Now, much as I’d love to draw out the suspenders further, the somewhat banal ‘revelation’ is that I’ve bought a new easy-to-install – and effective – rear . Profound.

I’ve used mudguards (perhaps ‘fenders’ to US folk) before.

For my old bike (the trusty Dawes) I bought a set of SKS Raceblades, which I used for one winter season (or maybe a couple).

The Raceblades were straightforward to fit, using plastic mounts that, themselves, were attached to the bike with the same thick rubber bands used to fix Garmin handlebar mounts. They were effective as well, at least in terms of protecting me from spray.

The main issue with the Raceblades was the noise. Or rather the cause of the noise.

On a relatively frequent basis, the mudguards would rub against the wheels. I am sure this additional resistance resulted in a loss of wattage, or really a loss of speed for the same wattage, and I have neither an abundance of watts nor speed that I can risk losing.

Every so often I’d have to get off the bike in order to fiddle with the guards to stop them rubbing. Which. Was. Annoying.

Once I took the Raceblades off one summer, I never quite got round to attaching them again. Then I bought a replacement bike (my Trek Domane) in 2013, and I’ve ridden sans guards ever since.

The Moment Of Clarity

I was driving to work in mid-December. I had spent the entire journey ruminating on my dirty bottom problem. As one does.

I pulled up at some traffic lights in front of a gym in almost-central Birmingham. Someone had locked their road bike (which they presumably used for commuting) to the railings.

The bike had a rear of the sort I assumed were only seen on mountain bikes.

I’d barely parked my car (hush now, I live too far away to commute by bike) before I was a-Googling (or a-Wiggling) on the subject.

They (you know, they… manufacturers!) make a clip on rear for ROAD bikes! Who knew?

Given it was only a fiver (in English pounds – your currency may vary), reader I bought one.

And waited for my dirty bottom problem to be solved.

Of course, me being me, the box containing the sat unopened in my bedroom for weeks whilst I continued to use my bike. In the wet. In spite of the mud. Moron.

I finally got round to fitting it on a very cold day at the end of December.

***We interupt this broadcast to bring you this important anecdote ***

In fact it was so cold on ‘fitting the day’ that the ride that day lasted all of about 4 minutes and 500 metres, before the realisation that, with the quantity of ice (both black and white) on the road, a late Christmas present of a broken collarbone and (worse) a broken bike were on the cards. 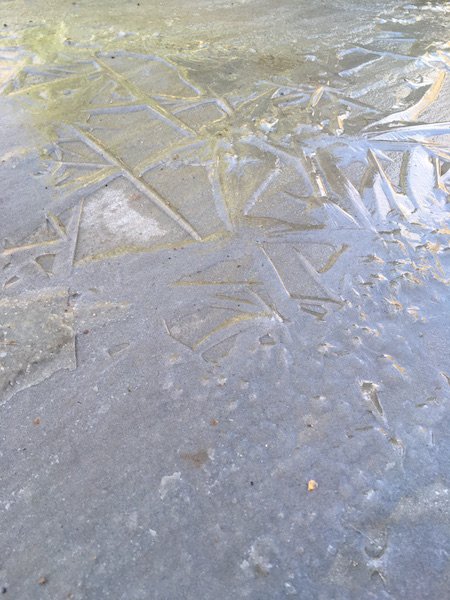 I ended up setting up my (trusty) Dawes on the indoor trainer. Which I put on the patio. And thus completed my first outdoor indoor trainer ride for many years. 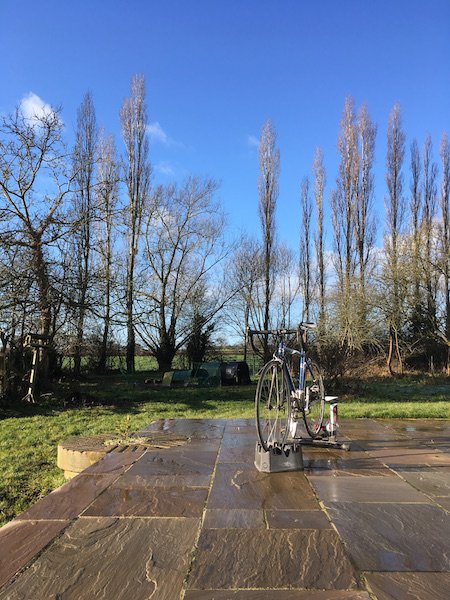 Er, back to the show? 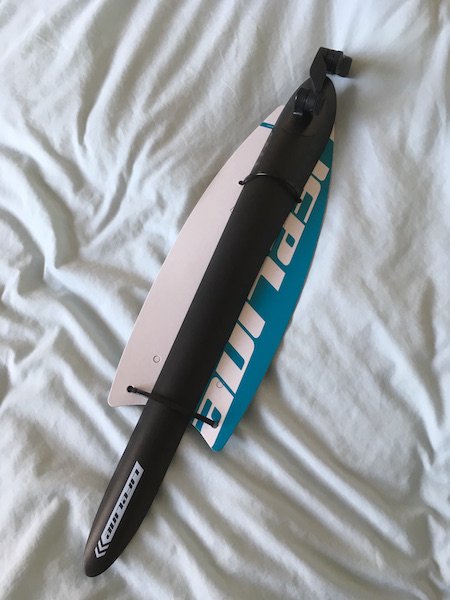 It’s a pretty straightforward piece of plastic, attached to a bracket that you tighten around the bike seat post. There is a little hinged arm thingummy that allows some flexibility on how the is positioned over the rear wheel. 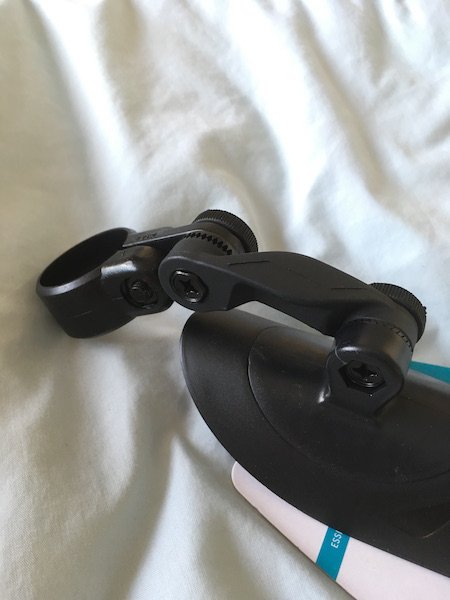 The bracket that attaches to your seat post is tightened with the aid of a Philips screwdriver. The two pivot points that you can use to position the at the optimal angle and distance from your wheel are adjusted by finger-tightening the dials, which in turn tighten the bolts that lock the joints into position. 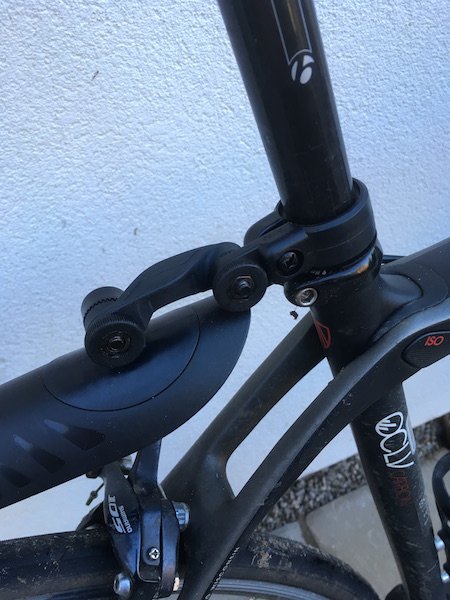 LifeLine (or Wiggle I suppose, as it’s their brand) supply a few different sized collars to allow the to be fitted to a range of different diameter seat posts: 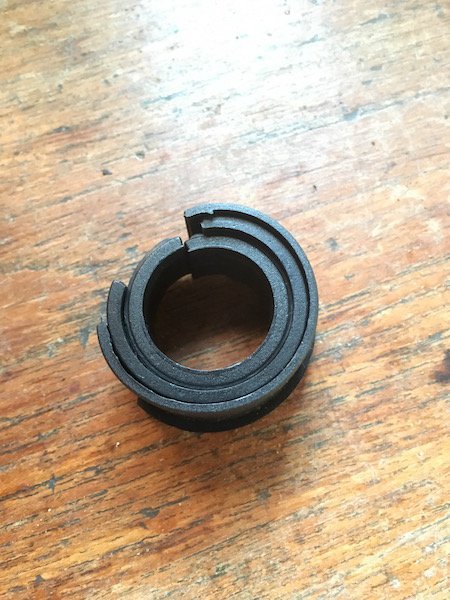 I imagine this is obvious from the photos, but I’ll say it anyway. I don’t think the guard would attach successfully to seat posts that are not round in profile – for example, aero posts with more of a tear drop profile (#aero).

As we all know, aesthetics are clearly more important than functionality when selecting accoutrements for your bike. However, once you’ve made the decision to prioritise a dry Aris over a sleek velo, you have to accept some visual compromises. 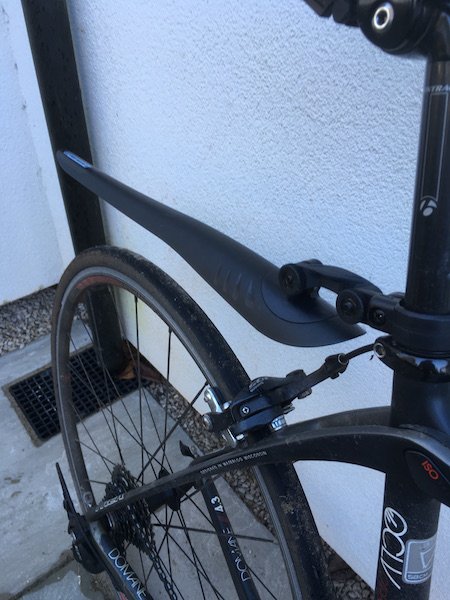 I wouldn’t say the LifeLine rear is the most attractive thing you can attach to your steed. I guess it looks okay. It’s pretty simple and sort of levitates above your rear wheel. 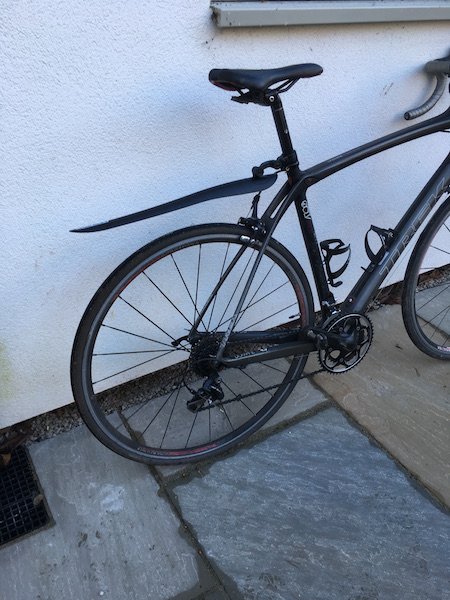 It’s sort of like a quizzical eyebrow, raised jauntily above the rear wheel. A flourish with a playwright’s quil. Hercule Poirot’s waxed mustache.

Of course, I already sully the clean lines of my Trek Domane with a cheeky saddlebag. You will be pleased to notice that the can be fitted quite comfortably alongside the saddlebag (or perhaps vice versa). 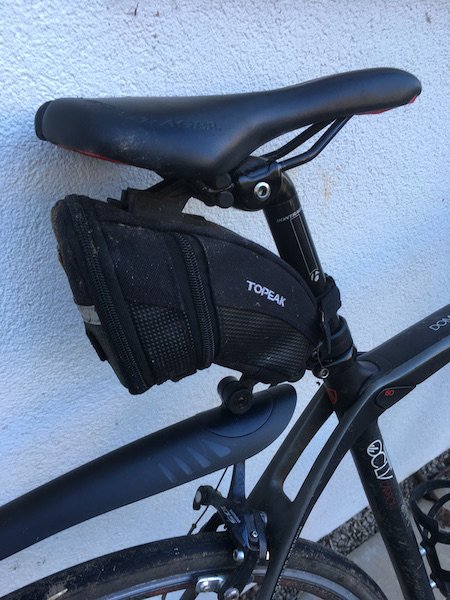 So, Does It Work?

As mentioned above, my first test ride with lasted all of 4 minutes and 23 seconds:

(My ‘privacy zone’ on Strava makes the ride look even shorter…)

Any potential (and, let’s face it, hypothetical, given how far away the guard sits from the wheel) rubbing noise, was drowned out by my silent terror-screams as I realised quite how icy it was.

It was also dry.

I got the opportunity to test it properly a couple of days later, when the road conditions (or at least my drive conditions) looked a little like this: 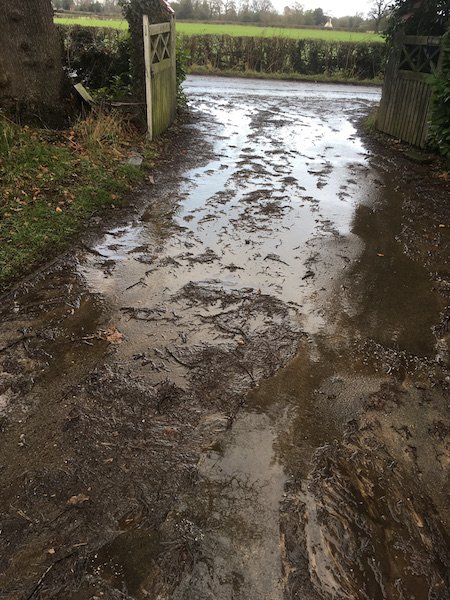 I am pleased to report the following:

Here is the ‘after’ from the aforementioned test ride: 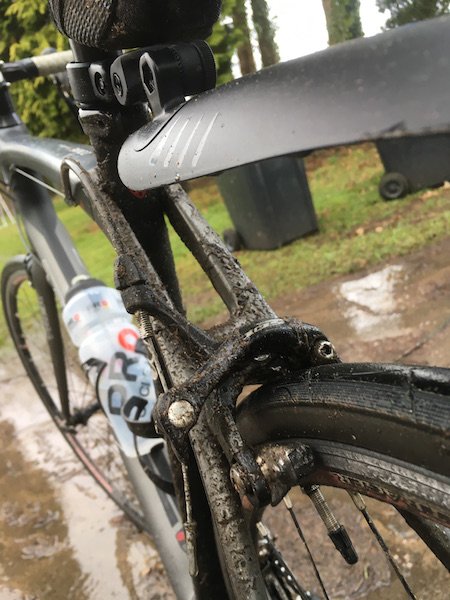 You will note how cruddy the brakes, rear seat stays, the seat post and the wheel are. You might also note how clean the top of the is.

And this cleanliness extends to the ‘protection area’, which you will now please to enjoy: 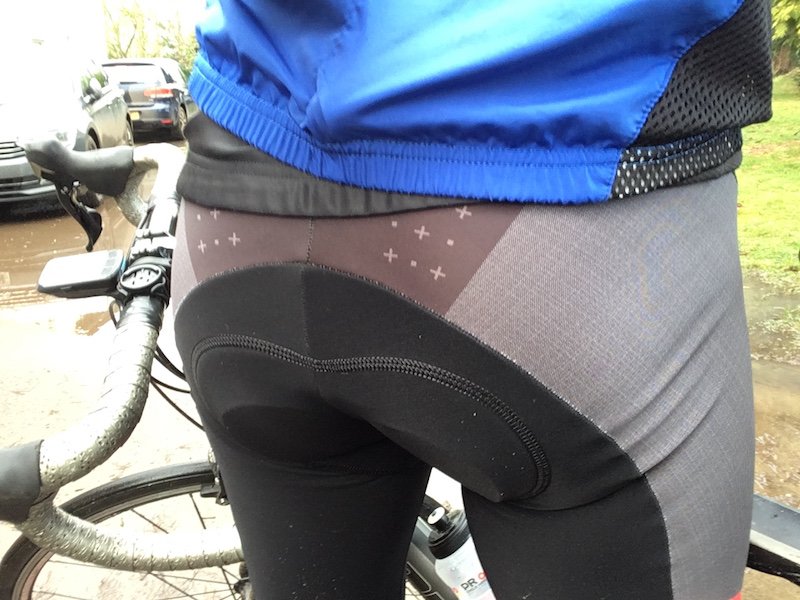 The things I do for this blog…

I also got my wife to take a photo of the full back region. There’s a bit of spattering (from mud!) on the lower leg and a touch on the inner thigh […silence…]. 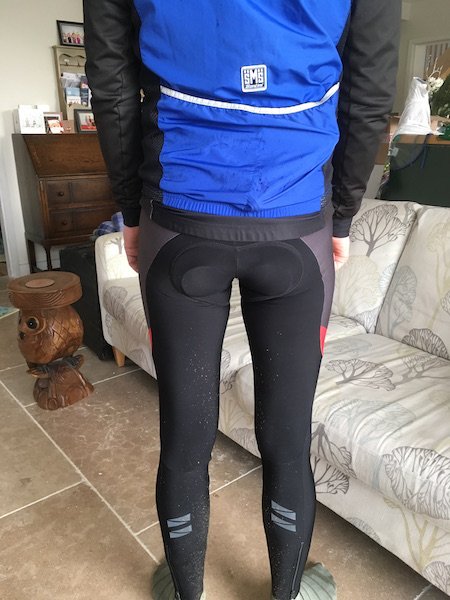 But generally a good result. My gilet (the blue thing) barely needs hanging up. Pre-mudguard rides saw it receiving frequent goes through the washing machine.

Here ends my highly technical ‘review’ of the LifeLine clip-on rear . It was dead easy to fit and seems to do the job. It probably diminishes the look of the bike. But then I don’t spend most (any) of my ride staring intently at my rear wheel.

Right, who else is a fan (my starting question at dinner parties)? Any recommendations? Front and back?