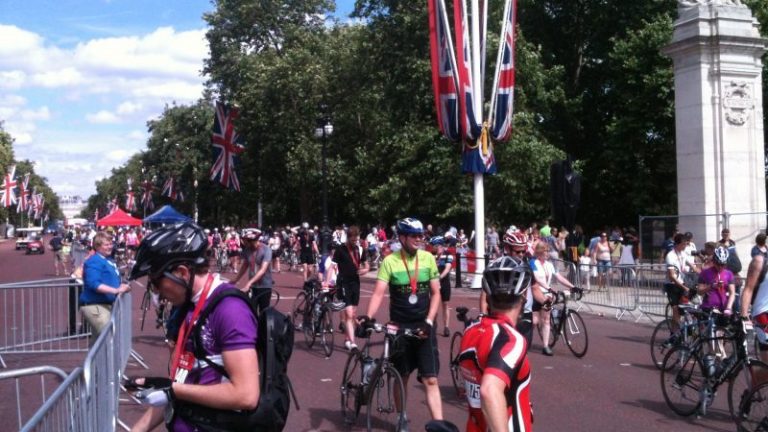 Long-time (and even short-time) readers will know that RideLondon has been a major theme on this blog over the past few months.

The inaugural running of the event took place on Sunday 4 August (two days ago as I write). I thought you might like to know how I got on.

I finished. I never found myself in any danger of being swept up by the broom wagon or forced to take one of the course-shortening detours. I didn’t puke. Good times.

Talking of times, my official result was 6:40:42. My Garmin has my moving time as approximately 6:16, once you take off the 7 minutes it took to get from the ‘start’ to mile zero (the depart fictif).

I reckon my actual moving time was perhaps 15 minutes or so less than this. The food stops (or ‘hubs’ in RideLondon language) were like long conga rides of dismounted cyclists desperately trying to grab bananas, energy drinks and, curiously, sour cream flavoured pretzels. At the first hub (Hampton Court), the walk from the dismount point to the food stands was a good 200 yards through the palace gardens, which I assume my Garmin recorded as moving time.

Anyway, long and short of it, I reckon I was riding for about 6 hours. Which I’m pleased with.

And Those Infamous Climbs?

I last rode up Leith Hill and Box Hill in March.

As a result, my times for Leith Hill (the ‘Leith Hill, northbound’ segment on Strava) and Box Hill (‘Box Hill (roundabout to peak)’) were faster by 3 mins 20 seconds and 4 mins 53 seconds, respectively.

Again, I’m pleased with those times but reckon I’ve got plenty ‘in the tank’ to improve further with some consistent, structured training.

The Pre-Race Preparation (And That Run In With “Authority”)

The run up to my ride on Sunday did not go well. This is not because I followed the advice in my (spoof) post from last week.

Fate (and the two superbug-harbouring pre-schoolers that I live with) conspired to bestow me with a virus during the week. I was still suffering on Saturday, as I made my way to the Excel centre to register. With blocked nose and heightened anxiety levels, I reckon I slept for just 3 hours on Saturday night.

My stress levels went through the roof on the way to the start. The whole family were staying with friends in Kingston. My mate (who had generously got up at 5am) was due to drive me to an official drop-off point near Tower Bridge.

We knew we had to cross the route for literally one second at the end of my mate’s street to get to the A3. We knew the road would be closed for the ride. We didn’t know it would be blocked from 5am onwards (one hour before the first wave started… a good 20 miles away). Nor did we expect such jobsworth security guards.

In the end, after 30 minutes of futile pleading, with my ride and £1,100 of charity money seemingly slipping away, we cracked and (Dukes Of Hazard-style) went up on the curb and raced through the road block. Take that, paramilitary-styled security men. Ka-blam-mo.

Thankfully things got a little better after that. We sped through the empty streets of London. The drop off point was clearly marked and easy to use. The route to the start was well-signposted and provided a gentle spin to warm up the legs. After some water, a pre-ride comfort break and a few of my trusty jelly babies, I was up for the task ahead.

The Highlights Of The Day

I’ll do a detailed review of RideLondon as a sportive (the route, the organisation etc) in another post.

For now, I’ll just give you a few of the high points:

This was awesome. Sweeping down past Harrods, riders filling both sides of the roads. The peleton splitting as some cyclists went the wrong way around roundabouts (Tour de France style!). Marshalls standing on traffic islands, waving flags and blowing their whistles.

Like many people, I’ve never ridden on roads closed to other vehicles (and pedestrians). It was a privilege to have the experience.

No one ever claps you (or welcomes you to Cobham) on other sportives. They do in RideLondon. There were loads of people out on the streets cheering on the riders and offering helpful tidbits of information (“You’re 200 yards from the top”; “Esher is your next stop” (presumably a wannabee train conductor); “Boris is eight minutes in front of you” (he wasn’t)).

As I was wearing the charity’s jersey, I got a lot of, “Come on, Macmillan!”, which I appreciated.

The ride down the finish straight on the Mall, with spectators cheering, banging the hoardings and high-fiving the finishers was particularly memorable. I clean forgot to outsprint another rider, zip up my jersey and point to my sponsor.

3. A sportive through London

Sportives often pass through areas of natural beauty. Urban areas only tend to feature when the route simply can’t avoid them.

RideLondon was obviously different. The clue might be in the name.

Partly this relates to my point one, but as a former London bike commuter, it was great to pass such familiar sights in the company of hundreds of other cyclists, without having to worry about traffic lights and HGVs.

Sportives generally don’t go down roads like Piccadilly, Whitehall and the Mall. This one did and awesome it was.

Your generous donations encouraged me to keep up the training. You were the drunken, mankini-wearing Australians pushing me up Leith Hill*.

23 thoughts on “RideLondon 100: Race Report (And A Brief Run-In With Authority)”