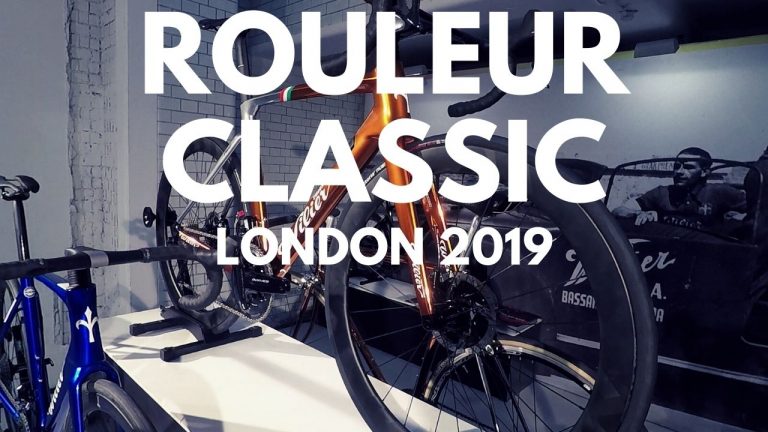 The Rouleur Classic is a bike show for hipsters. Based in London for two and a half days only, it is a celebration of bike-based beauty, cutting edge velo tech. And, from what I can tell, drinking.

Now, in terms of fashion, I’m firmly at the back of the peloton, if not the lanterne rouge. Nonetheless it seems that Rouleur lets anyone buy a ticket to attend. So i did. And I did.

And in this post (and video) I’m going to tell you about the cool stuff I saw at the show.

The day started with a train ride down to London. Which gave me the opportunity to feel uncomfortable shooting videos on a railway platform.

The Rouleur Classic takes place at Victoria House in central London, near to the British Museum. The inside had been transformed into a pretty funky exhibition space.

The show involved a range of top end bike makers, component companies and clothesmeisters, all showing off their bestest, most exciting velotastic products.

There was also a packed schedule of panel discussions and interviews with luminaries from the cycling world, all of which took place in a dedicated, and sometimes packed, theatre space. There are some photos at the end of this post.

All bike trips, even if you’re not turning a pedal, should start with a coffee. And since this was a high end cycling event, the coffee was good.

Fully caffeinated, it was time to get into the bikes.

In the video (above), I spend quite a lot of time perusing the Willier Cento10 Hybrid, a fine example of the genre. The motor is in the rear hub. The slimline battery is the downtube. The motor is engaged by pressing a simple button near to the handlebards.

The bike uses almost entirely standard components, including around the bottom bracket, which hasn’t been widened to accommodate a motor. This means the distance between the crank arms, the Q factor, is not increased.

Your pedal stroke, and your knees, will thank you.

The only non-standard element on the bike, apart from the motor, is a longer rear axle. The chap at Willier told me they’re aiming to revert to a standard length in the next version of the bike.

Willier were not the only maker with high end e-road bikes at the show. If you watch the video, you can fill your eye holes with a range of beauties. Here’s a photo of one from De Rosa (admittedly at the more obviously chunky end of the scale – the battery and motor for this one are in the down tube and bottom bracket).

There were plenty of normal road bikes as well. But you couldn’t really call any of them normal.

There was plenty of bike bling on show. Campagnolo had their usual array of Italian engineered finery. Shimano were showing off their new GRX gravel groupset, with its chain-slap-reducing clutch.

And in case you were worried about the lack of gravel bikes so far in this post, the Rouleur Classic had a whole room full of them (again, check out the video…).

There were smaller companies as well. Speedplay, fresh from its recent acquisition by Wahoo, was showing off its full range of pedal-shaped lollipops. I stepped in to one conversation as an uninvited brand ambassador, extolling the wonders of the pedals in sorting out my knee pain. The guy at the stall seemed bemused by my level of evangelism for his product.

I was particularly interested by the CeramicSpeed booth, they of the outsized jockey wheels and the ceramic bearings. CeramicSpeed were demonstrating the Driven, a drivetrain that dispenses with chain and derailleurs in favour of a rigid and not a little beautiful driveshaft design.

It’s not about the looks though. Ok, its not all about the looks. The design is better at transferring power from your leg guns to the tarmac than standard chainsets, they say 99% efficient, with 49% less friction. So many numbers.

Recent work with Specialized has shown it to be hashtag more aero as well. It’ll be a while until the Driven is commercially available, and who knows how it’ll fare in Derbyshire muckroads. I’m happy to test a demo model if they want to send me one.

You can’t go five minutes on my blog without mention of a certain piece of Castelli foul weather clothing. Now vlogwatchers get a piece of the action.

This year marks 10 years since the introduction of the Gabba, now known as the Perfetto (check out my review). Castelli was on hand with earlier iterations, as well as the current 2019 Rain Or Shine version.

Gore had a lady sewing Rouleur Classic musettes, presumably so the Gore crew could give the full sales spiel to punters in the queue. Not much selling was required though. Their kit was lovely.

Santini, the Italian maker of world championships jerseys, amongst other things, was there with a colourful display of kits of yore. As well as their latest fabric tech, built into this skinsuit for the Australian national team.

Finally, not to be outdone, shoes and shades were at the show in abundance. Mavic even had a guy giving their shoes a custom paint job. He reckoned, once sealed, they’d stand up to daily use. He couldn’t confirm whether Mavic had tested the shoes in Derbyshire cow muck.

Whilst there was plenty of bike tech on show, it was more on the component side rather than bike computers and smart trainers.

That said, with 2019 seemingly the year of the smart bike, it was no surprise to see a couple on show. Wahoo were demonstrating a couple of KICKR Bikes, along with their Headwind smart fan. It was pleasing to see that the video course they were using looked like Yorkshire.

Tacx brought along their Neo Bike Smart along with a bright yellow Neo 2 smart trainer. Which would certainly brighten up my damp garage.

Whilst the smart bikes from Wahoo and Tacx are designed for your living room, with the Fuoripista, Elite brought along an indoor bike more at home on the deck of your motorboat.

Of more interest to me and my budget was the relatively new Elite Suito:

Having seen other smart trainers, I hadn’t quite realised how small and compact the Suito was. Apparently pitched at an attractive price point, this could finally be the model that launches me into the world of smart trainers.

One last trainer before we move on. I was interested to see the 4iiiiiii Fliiiiight trainer in the flesh. It uses magnets to generate resistance rather than anything physically touching your wheel. I didn’t see it in action, but by all accounts it works. So that’s all good.

Contrary to popular belief, it’s not all about the bike.

The show had plenty of other cool stuff, including interesting pro cycling memorabilia. The Rouleur Desire Grand Tour Gallery featured a selection of race winning bikes from the past decades.

I’ll take the pink one please…

This exhibition (by Englishtifosi) won the Sportive Cyclist Best Cupboard In Show award.

The Koers bike museum, based in Flanders, provided a selection of historic Tour jerseys and other paraphernalia to peruse over.

Former pro road and track cyclist Rob Hayles was there, showing off his fine array of cycling-inspired custom jewelry. As my poorly-shot video didn’t really capture.

There were also a few bikes that I arbitrarily classified into my ‘cool stuff’ segment. They all had custom paint jobs, including one with the livery that adorned Nigel Mansell’s Williams F1 car when he won the world championships (if my mustache-related 90s trivia serves me right).

Finally, for those people with bikes so expensive that you need to lock them up inside your house, Velohawk were displaying these premium secure bike storage boxes, with James Bond pneumatic doors.

They even do a clear sided one, for people that like their prize fish made out of carbon.

Now before we get into our final act, I did promise at the start of this post a glimpse of the new Team GB track bike, so here we are. Designed by component maker Hope Technology and Lotus Engineering, the bike will be used at the Tokyo Olympics in 2020. Let’s hope it rides as fast as it looks.

The day finished finished for me in the Rouleur Classic theatre. I hovered at the back of the peloton briefly before attacking during a feed stop and securing my place in the break. Or a seat in front of centre stage.

It was a long day in the saddle, fighting to keep position during some interesting talks from professional cyclists, product designers and brand managers.

It was worth it though, to be in prime position for the Cima Coppi, some American guy talking to former British road champ and cyclo-media chap Matt Stephens.

No, wait, that’s not right.

I had a velotastic time at the Rouleur Classic. Whilst not exactly intimate, it’s a small scale show. You get plenty of space to get up close and personal with the bikes. There were many famous-in-the-world-of-cycling folk just wandering around. There are few places that I’m going to get this close to Greg Lemond.

If cycling is your bag, you should definitely go next year. Maybe you’ll see me there. I’ll be the one with the mini video camera, feeling inadequate next to this guy.