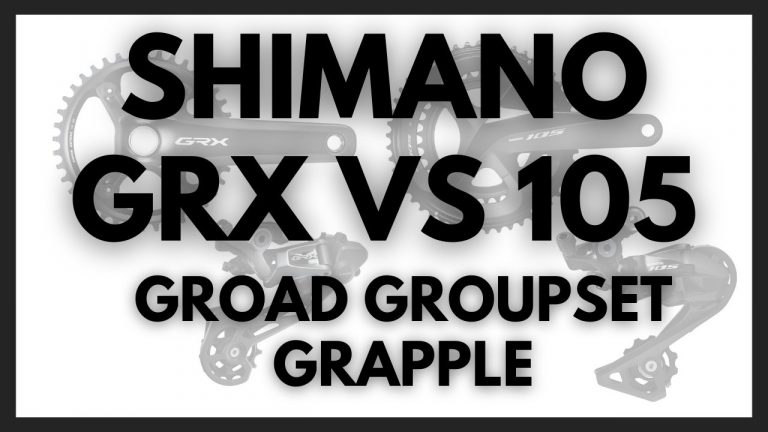 You don’t have to fit your new gravel bike with a ‘gravel-specific’ groupset like Shimano GRX. Riders looking to move from the tarmac to a little light off-road could quite happily spec a knobbly-tired adventure bike with a sturdy road groupset like 105.

So which to choose then: Shimano GRX or 105?

Your intrepid veloreporter, er me, considers your options (I’m good like that).

What Is A Groupset?

Broadly speaking, the term groupset describes the majority of mechanical (and sometime electronic) components attached to your bike frame.

It’s sometimes used as shorthand for a bike’s ‘drivetrain’, the chain rings, rear cassette, front and rear derailleurs, but also extends to the shifters, brakes, bottom bracket and chain.

But in this post, our groupset glare will be shining on Shimano.

105 sits in the middle the Shimano road range, below Ultegra and above Tiagra. It is often characterised as Shimano’s first ‘proper’ performance groupset.

Indeed, Shimano draws an actual (rather than figurative) line on its website separating 105, Ultegra and Dura-Ace from the value options further down the range.

GRX is a broader description that covers components that correlate with road equivalents from Ultegra (higher spec than 105) and Tiagra (the tier below 105).

** Speculation alert ** One imagines that after a few years, particularly if gravel continues to grow (can gravel grow?), GRX will separate out into more distinct families, targeted at different rider types (with differing amounts of money to spend…).

Shimano 105 has been around for a long time. The first 105 series groupset was introduced in 1982. I think we’re now on to the ninth generation. Shimano has had plenty of time to hone 105 to meet the needs of its target market.

GRX is newer (obviously!). According to Google Trends, searches for the term ‘Gravel bike’ only started in 2015. I understand the little rocks themselves are slightly older.

Shimano were reasonably quick to jump on grandwagon (er, gravel bandwagon) then, launching the GRX groupset in May 2019.

Whilst the GRX represents a relatively new set of components, clearly it draws on Shimano’s decades of velomechanical experience.

What Are The Current Model Numbers?

In the world of Shimano (a place where we all aspire to live), it pays to spend a little time getting to know the model numbers of the various groupset families.

If you per-pe-pick the right parts (Granville), components from one model family will be compatible with those of another and can be mixed and matched.

Mixing and matching between the tiers is sort of required because not all of the sub-ranges has all of the components you’ll need.

The main thing to bear in mind (like when picking from different Shimano road ranges) is to pick either 11- or 10-speed components – don’t try to use a mix of the two.

Disclaimer alert: this section doesn’t begin to cover all the complexities of mixing and matching components between different ranges. If you are going down this path, seek specific guidance from someone that knows (like a bike mechanic or experienced retailer).

Which seems like such an unsophisticated beginner cyclist question. In fact, in a discussion of 105 vs GRX, it sort of gets to the heart of the matter.

For 105 there is an easy answer, the number is 22 (at least for the current and prior generations of the groupset). It’s an 11-speed cassette paired with two chain rings.

GRX comes in both 10-speed and 11-speed formats (defined by the number of sprockets on the cassette). Paired with a double chain ring at the front, this means 20 or 22 gearing combinations to choose from.

But what happens if you have a pathological fear of front derailleurs?

There’s Only One Choice For ‘One By’

Unlike 105, GRX can be fitted to your bike in a 1x configuration.

You do clean your bike…. right?

It also means you have to use cassettes with a far wider range of sizes in order to achieve a usable set of gear combinations (usable by the average rider, as opposed to the gigantic-thighed pro).

And also a rear derailleur that can handle moving a chain around over a larger ‘sprocket area’ (a term I may just have coined).

GRX will take a cassette that goes up to 42 teeth on its largest cog (provided you go for the RX812 rear derailleur) whereas 105 caps out at 34 teeth (again, with the right ‘cage’ derailleur).

Shimano only wants to give those cheeky gravel guzzlers so much gearing flexibility.

Now this is interesting … whereupon Mont proceeds to state something distinctly uninteresting.

Shimano GRX is available in Di2 format, meaning you can have the front derailleur (if you have one) and rear derailleur shift electronically (as opposed to mechanically).

Shimano 105, unlike its higher spec Ultegra and Dura-Ace brethen, has not yet received Di2. And it remains an open question as to whether the ‘yet’ in my last sentence is appropriate.

So if you are swayed by the prospect of electronic gears, then this would push you to GRX over 105.

It’s not really a fair comparison though. As mentioned (MUST I repeat myself), GRX spans Ultegra to Tiagra in equivalent road spec terms.

The GRX Di2 components really sit at the Ultegra end of the Shimano equivalence continuum (I assume they call it that). And Ultegra is available in Di2.

I’m not sure where that puts us. MOVING ON!

Although GRX is visually very similar to 105, there are a few special features that speaks to its focus on gravel and light off-road riding.

GRX has what Shimano terms a ‘Shadow RD+ chain stabilizer’ on the rear derailleur. This stabilizer, which can be switched off and on, reduces the likelihood of dropping your chain when riding over rough terrain.

It also results in a quieter drivetrain. No one, least of all me, wants a chattering chain.

GRX has a couple of extra brake lever options versus a standard road groupset.

For 1x set ups, the lever that would otherwise be used to control the front derailleur on a 2x (and is just a brake on a 1x) can be replaced with one that operates a dropper seat post (as well as retaining its standard braking job).

So, if you plan on tackling downhill trails that require you to maintain clear distance between your seat and your ging-gang-goolies, the GRX has you covered.

Is There A Weight Difference?

There’s not a great deal of merit in selecting between the two groupsets based on weight. GRX is designed to be ridden over rough terrain, where durability matters more than saving a few grammes.

That said, choosing a single chain ring set up, with the consequent eschewing of a front derailleur, will lead to some savings.

The RX600 (closest to 105) 1x chainset weighs 743g, which is actually less than the standard 105 double, but 30g more than the compact version. The lack of front derailleur saves a further 95g.

You give it back elsewhere though. The higher end GRX rear derailleurs weigh 20-30g more than the equivalent 105 and you need the heavier, longer-reach version if you’re running 1x.

But, again, we are talking weightus differentalis equivalent to a bag of crisps (fuel for fitness) or a few slurps of the bidon. It don’t matter.

What Is The Cost?

Comparing the cost of groupsets is an inexact science at the best of times. Most come attached to a bike, whether new or used, and the price paid is linked to the overall spec.

In comparing 105 and GRX, we’re looking across a blended road/gravel cycling use case. This muddies our comparison waters further. GRX-fitted bikes are less likely to feature (cheaper) rim brakes.

This difference (GRX costing more) bears out on a component level. The lower-spec (Tiagra-equivalent) GRX rear derailleur still costs more than the 105 equivalent (albeit a modest £5).

Aesthetics (Or How Do They Compare In The Looks Department)?

I prefer the look of GRX. And I ride 105 almost all the time. So this is quite a big betrayal.

GRX looks purposeful and rugged. A 1x front set up significantly cleans up the clutter around the bottom bracket. The brake/gear levers look clean and modern (tsk Mont, who cares how the levers look).

Looks provide no real basis on which to select a groupset for your bike. But for a large number of us, the aesthetics are important.

So you might want to look at a few photos (and try not to let it cloud your judgment too much).

So Which Is Better?

Ah, finally. The key question. And one I’m not going to answer without those two all-important words.

And actually, in this case, the thing it depends on is pretty crucial.

On the other hand, if you dabble in gravel and your bike is otherwise set up to handle a little of the rough stuff, then GRX at least gives you options.

The option to run a 1x chain ring, to have a few dinner plate-sized cogs on your cassette, to have a rear derailleur that will contain your chain whilst the bike gets thrown around.

And actually I think the name, GRX, sounds cooler than 105. So there’s that.

As always: YMMV; do your own research; don’t eat yellow snow.