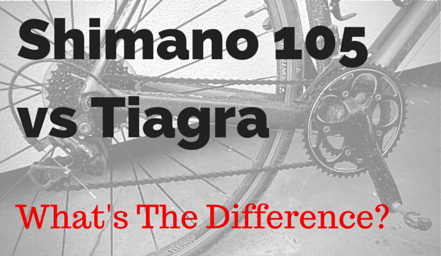 When it comes to choosing which make and model of gears for your first road bike (or your first ‘proper’ one), chances are you’ll be deciding between a Shimano Tiagra and a Shimano 105 groupset.

For those that already ride with Tiagra, 105 seems the natural upgrade path.

But which is best, given the price difference? Is it worth upgrading to 105?

In this post I’ll explain the difference between the two and give some thoughts on how best to decide.

Shimano, like competitors Campagnolo and SRAM, produce a range of components for bikes that are designed to be used together.

As well as the parts that make up the gearing system (chainrings, cranks, cassette, front and rear derailleur, chain), a groupset will also include the gear shifters and brakes.

On a new bike, the manufacturer will either specify all of a given groupset or mix and match between different ranges (for various reasons, but generally it comes down to price). Where Do Tiagra and 105 Sit In The Shimano Range?

After 105, there is Ultegra and Dura-Ace, both of which have mechanical and electronic shifting (known as Di2) versions. Professional teams that ride with Shimano components spec Dura-Ace for their pro riders.

Either confusingly or helpfully, each range is also described by a four digit number. Afficionados, looking to confuse us mere mortals, will sometimes refer to a groupset simply by this number.


What Is The Key Difference Between The Two

Being brutally honest, the most notable difference between 105 and Tiagra is probably the price. They both do the same job and they do it effectively. They are both durable and reliable.

You can find plenty of people online that extol the virtues of the cheaper option. There is enough noise to believe that this isn’t solely down to a desire to get one up on higher-spending (Team-Sky-kit-wearing*) cycling brethren

The price difference if you’re buying a groupset on its own (i.e. not as part of a bike purchase) is surprisingly small. A cursory search (and this blog is built on cursory searches) suggests you can purchase the new 105 set for an inner tube less than £300, whilst the Tiagra groupset is offered at £215.

For those who are hard of maths, that’s a saving (or additional cost) of ~£80.

… Is not just what happens after an all-out effort to get up that final hill.

It’s also what happens, year after year, as a company updates its product ranges.

Just as we’ll all have windscreen head up displays in our 2020 Kia Ceed, today’s groupsets inherit features from their higher-priced cousins of yesteryear.

In fact (according to Cycling Weekly), the raft of improvements in the current 105 set comes from the 2012 Dura-Ace offering. I might not need to remind you that Bradley Wiggins won the Tour de France in 2012. He rode with Dura-Ace (although perhaps it was the non-Shimano assymetric chain rings that made all the difference).

Looking at new bike purchases, you will tend to see Tiagra specced on models priced at less than £1,000 (or on carbon frames a touch above that price level). 105 is generally found on bikes priced from £1,000–1,700.

105 has more gears than Tiagra. The current generation features a cassette with 11 cogs on it; the Tiagra cassette has 10. Thusly, if you ride with a compact chainset (or an old-fashioned double), you have the choice of 22 gear combinations with 105 and 20 with Tiagra*.

(*As always, some of these will be duplicate gears)

There is a marginal benefit in having an extra rear gear. The progression through the gears is smoother with smaller ‘leaps in hardness’ (another technical term). And, like Dave Brailsford, we’re all for the accumulation of marginal gains.

That said, I ride the previous generation 105, which delights in 10 gears, and I’ve been perfectly happy with it. On its own, an extra gear wouldn’t be enough to compel me to upgrade.

In addition to gear shifters for dropped handlebars, the Tiagra range also features shifters for flat handlebars and (who knew) down tubes (i.e. where gear shifting took place in ‘the  glory days’).

I’m not sure how relevant that is, other than as an indication that Tiagra is not a ‘pure’ road cycling groupset.

You Mentioned Dura-Ace Features That Are Now in 105?

The 105 chainrings now look like Dura-Ace ones. There are four arms which connect the crank arms to the rings.

For me (as a rider unlikely to worry Shimano’s stress tests on the power front), this is a marginal improvement indeed. The change provides a bit more stiffness and strength.

It also means that the bolt placements on the chainrings have moved.

This is relevant if you are one of a small group of Sportive Cyclist readers that have two sets of chain rings (e.g. a compact and a double) and change between the two (e.g. for hill climbing versus time-trialling). You can switch between chain rings without having to change the cranks as well.

The other important change (to Shimano and Cycling Weekly at least) is that 105 now uses an anti-friction treatment (known as ‘Sil-tec’, proprietary invented chemical fans) within the cable tubes and on the chain, in order to speed up gear changes and require a little less effort from your poor fingers.

How Do You Decide Between Tiagra and 105?

If we’re talking about a new bike specification, the choice of gears is not made in isolation. Tiagra often finds itself on an entry-level steed; 105 starts to present itself further up the price spectrum. Tiagra will be allied to other entry-level equipment (the wheels, frame material, saddle).

If you’re looking to spend £750 on a bike with 105 (which probably isn’t possible anyway), the manufacturer will have to have cut costs when it comes to the frame and wheels. There is no point having a marginally-improved set of gears if your wheels were made by a blacksmith.

If we’re at the £1,000 level and there is a choice between two bikes from good quality manufacturers, one with 105 and one with Tiagra, I’d be minded to select the Tiagra one, on the basis that it’s more likely to have a better frame and other components (though you’d want to check).

If you have a budget of £1,500 – £1,700 then you’re likely to see 105 gearing installed on a good quality carbon frame with wheels and finishing components of a similar level. Stepping down to Tiagra on a mid-range bike like this is unlikely to be worth it.

Applying the savings you make to other areas of the bike won’t get you much of an upgrade. The only caveat to this might be where a manufacturer has used cheaper wheels to bring the bike in on budget (which is common) – spending the extra £200 to upgrade the wheels is probably something you would feel the benefit of.

Should You Upgrade From Tiagra To 105?

Maybe. But with a few provisos.

If you have a £500 bike that you bought off the shelf (strong shelf), that wasn’t really sized correctly and doesn’t really fit (essentially the story of my first road bike purchase), then don’t upgrade your gears. Save your pennies and buy a bike that gets all the fundamentals right.

If, on the other hand, you have a frame you’re happy with (perhaps you’ve had it professionally fitted) and you’re starting to think about replacing bits of your drive train, then I think an upgrade to 105 makes a lot of sense.

According to Cycling Weekly (again…), the new generation 105, despite looking a bit like Dura-Ace, is a very strong (and considerably cheaper) alternative to Ultegra. The difference in weight for the full groupset is in the order of 200g (less than the weight of a third full water bottle).

Have You Ridden 105 AND Tiagra? What Say You?

My experience with Tiagra gears (particularly the recent generation) is limited. My old Dawes chugs along on a clunky Campagnolo set up, made at some point in the Dark Ages (early 2000s).

I’ve been very happy with the 105 groupset on my Domane.

Is there anyone out there with experience of both sets? Or who is a massive fan of their Tiagra and wouldn’t swap it for all the EPO in a Spanish pharmacy?

Let us know in the comments below.