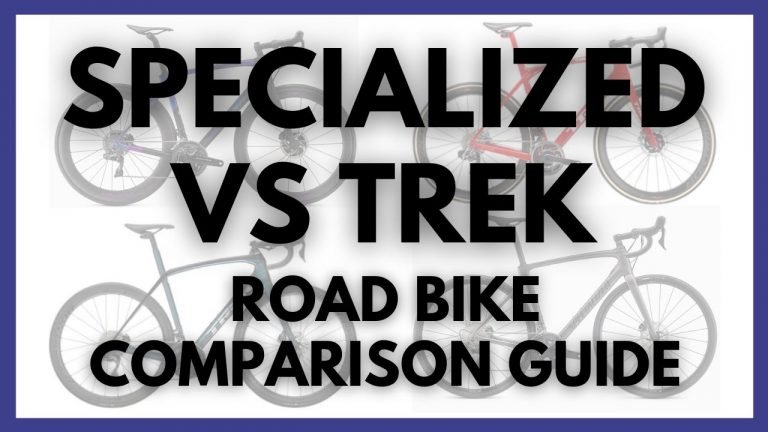 So you’re interested in comparing the road bike ranges of Trek and Specialized, huh?

Well, you’ve come to the right… oh wait, you’re not?

No matter. I’m going to write about it anyway.

I’m interested and that’s all that matters (and you may find it useful, entertaining, a useful sleep aid). Onward!

Why Specialized and Trek For This Special Comparison, Mont?

Well, I’ve ridden a Trek carbon road bike for these past (nearly) six years and I’ve been very happy with it. I’d certainly consider buying another one.

We’ll get onto this, but one of the (less rational) reasons for buying my bike (the Domane) was that it was both an ‘endurance’ bike (built for the less fit who want a more comfortable ride) and cool* (it was the bike Fabian Cancellara would use to ride Paris-Roubaix).

Things have moved on slightly (‘endurance’ and all out racing bikes have converged somewhat), but Specialized also had (still have) a cool ‘endurance’ bike (i.e. aimed at the less flexible gent) that evoked the spring classics: the Specialized Roubaix – the clue’s in the title.

So Specialized remains the bike manufacturer I almost went for (the one that got away).

I did end up buying a Specialized steed a year after the conclusion of my endurance bike purchasing quest.

Only it was a 20″ Specialized Hotrock hardtail mountain bike for my son. Whilst an excellent bike, less relevant for this post.

Finally, true fact, the colour scheme for this ‘ere blog, which I updated last year is based on my current favourite team jersey: the Trek-Segafredo women’s kit (circa 2019).

So Let’s Start With The Basics

Both Trek and Specialized are US manufacturers.

Trek was founded in 1976 in Waterloo, Wisconsin by Richard Burke, owner of an appliance distribution business, and Bevil Hogg, a bike shop owner. As a lifelong fan of Lord Wellington and Abba (both of who loved distributing appliances), this appeals to me.

The company started life in a barn, a building which I recall from an episode of the Cycling Tips podcast, Trek still keeps as part of its current ‘campus’.

The company (as far as I can tell) continues to be owned by the family of the original founders, and is run by John Burke, son of Richard.

Specialized was founded in 1974, two years earlier than Trek, by Mike Sinyard. Initially Sinyard imported Italian bike parts that he’d discovered on his bike travels, but by 1981, Specialized had started making its own bikes, with one of the first being the Allez road bike*.

(* Wait! They still make the Allez, all these years later. Amazing…).

The company is 49%-owned by Merida, a Taiwanese firm that also make bikes. I think I probably knew this (prior to undertaking the ‘sort-of-research’ for this post) but was more surprised to discover that it made the acquisition in 2001. Anyway, Sinyard remains CEO.

Where Do Trek and Specialized Make Their Bikes?

Both companies undertake a large amount of their manufacturing overseas. It’s difficult (or impossible) to get precise figures as both are privately owned.

I can see why companies keep this information to themselves. When she was standing for political office a few years ago, the opponents of Mary Burke (of the Trek family) focused heavily on the fact that Trek bikes were made overseas and not supporting American jobs…

Trek sells in the millions of bikes per year (not all road bikes), of which maybe 10,000 of the really high end ones are manufactured in the US. Whilst much of the overseas production is (I think) in China, it also manufactures in Holland and Germany.

According to this article (which sounds legit but don’t believe everything you read on the internet, kids), all Specialized bikes are made in Asia, with key suppliers being Merida (makes sense), Giant and ‘Ideal’ (?!?)

Summary of the two ranges

I doubt you came here just for the history and some speculation over manufacturing facilities (though you should be aware that I do have actually have a history degree).

I thought I’d try to break down the road bike ranges of each company to help understand what compares with what. I could try to do that for their mountain bikes as well, but with my lack of knowledge on that front, I’d quickly be well over my skis. Look for that info elsewhere.

Similarly for their hybrid, e-bikes and other random ranges, well… whatever.

Trying to boil it down, here is a list of the road bike model ‘families’ made by each company, classified by the target sub-segment of the roadie market:

Here’s a link to the full range of Trek’s road bikes, in case you can’t work out how to Google.

And here’s a cheeky link to the Specialized website, so you can see all the up-to-date variants.

This is not always an exact science, as specifications can vary as models can be updated each year.

(Inexact science is my jam…)

Trek signal different levels of specification, higher quality (or lighter) frames, additional expensive features, through a combination of numbers (mainly) and letters (to a limited degree).

Higher numbers denote a higher specc’ed bike. The current Domane SL 5 has a Shimano 105 groupset. The SL 6 has Ultegra. Top of the range, the SLR 9 has full Shimano Dura-Ace Di2 electronic gears.

Trek bikes at the lower end of the price scale generally have the ‘SL’ designation (unless they’re aluminium frames, in which case they’re ‘AL’). I query if all the bikes in a range can be Super Light (or superleggara) but there you go.

At the upper end an R is added, to arrive at SLR (I’m guessing Super Light Race). The key difference between SL and SLR bikes is the frame.

Using the Domane as an example, the SLR frame has adjustable resistance settings on the Isospeed ‘suspension’ at the front and rear of the bike. The SL frame doesn’t (you’ll get the level of resistance you’re given).

Generally speaking, the basic version is just called the, er, name. So the basic Specialized Roubaix is called the… Roubaix.

Finally, at the top end, presumably in a nod to Lockheed’s advanced aircraft development arm (Skunk Works), Specialized does an ‘S-Works’ version of each bike (although ‘S-Works’ goes at the start, i.e. ‘S-Works Roubaix’ rather than ‘Specialized Roubaix S-Works’…).

Of course you do.

The websites of both Trek and Specialized do a fine job of showing off their bikes to the fullest. I ride a Trek Domane as my main road bike. I *love* the look of the new Emonda (shown here). Gold though...?

Find out more
If you click this link and make a purchase, I earn a commission at no additional cost to you. I am rather partial to the S-Works Tarmac (pictured here), if Specialized want to send me one to review....

Find out more
If you click this link and make a purchase, I earn a commission at no additional cost to you.

Well there is no conclusion, is there?

Because I haven’t finished.

The first draft of this post (which wasn’t even finished) was knocking on 5,000 words. Too much for even the most patient blogfans to bear.

I’ve broken it down into what looks like four future posts, each one dealing with a different bike category. So I’ll compare the Trek Emonda with the Specialized Tarmac, the Madone with the Venge. You get the idea.

Update: I’m pleased to report that I’ve published the Trek/Specialized endurance bike comparison – so now you can read it:

Who here owns a Trek road bike or a Specialized? Which one? What are your thoughts and would recommend the one you’ve got?

Let me know in the comments section below.

33 thoughts on “Specialized vs Trek Road Bikes: My Comparison Guide”