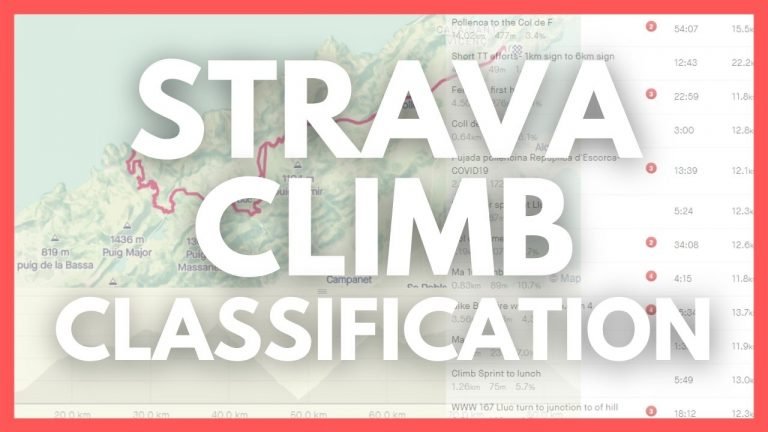 As an avid pro-cycling fan, and particularly of the Grand Tours, I have always been fascinated by the classifications given to the climbs along the route.

The sight of one or more Hors Catégorie climbs on the route profile for the following day’s stage means that I’ll have to clear my schedule for an afternoon spent glued to the television.

But how do the climb classifications seen in the Tour de France or the Giro correspond to those that appear on our recently completed Strava route?

But first a bit of history.

Why Do We Have Climb Classifications?

The concept of categorising climbs within the Tour de France was introduced to make the mountain points system more reflective of the relative difficulty of each ascent.

From 1933 (when the mountains jersey was introduced) until 1947, riders were given the same number of points (10 for first over, down to 1 for the tenth-placed rider), irrespective of how high or how steep the climb.

From 1947, climbs started to be graded by difficulty (with two categories initially, increasing to the present day five) and the awarding of points was adjusted accordingly (i.e. fewer points awarded to those riders first cresting the easier climbs).

How Do Climb Classifications Work In General?

As mentioned, the Tour de France features five categories of climb, ranging from hors catégorie (HC), the most difficult, then 1, 2, 3 and 4 (the easiest).

Hors catégorie translates to ‘beyond categorisation’. It’s the catch-all classification for anything that is harder than a category 1. Historically it was used to describe a col that cars would not be able to climb. Given the number of skier-filled coaches that get up Alpe D’Huez (used 23 times as an HC climb in the Tour), that distinction no longer applies.

Broadly speaking, the longer the climb and the steeper the gradient, the more difficult the climb is deemed to be, and it is graded accordingly. Overlaying this, when a climb features in a cycling race, the organisers look at where it comes in the route and potentially adjusts the classification. What might be a category 1 climb as the first col of the day, could become HC if it is set as the mountain top finish of a grueling Alpine stage.

So How Does Strava Classify Climbs?

Strava uses a methodology similar to professional bike racing, employing a formula based on a climb’s length and its gradient.

A key distinction versus the Tour de France approach is that climbs on Strava are classified on an individual basis, using terrain data. Classification is not influenced by where a climb features on a cyclist’s route. A cat 4 is a cat 4 whether you ride it straight out of the gate or at the end of a long hard day in the saddle.

Strava is open and specific about how it calculates a climb’s category. The length of the climb, measured in metres, is multiplied by its gradient, in per cent (for maths pedants, they use the ‘whole number’ per cent rather than the decimal, so 10% is 10 rather than 0.1).

In order to be categorised at all, a climb must:

If the minimum criteria are met, climbs are classified according to the following points scale:

Again, for maths purists, the Strava site is a bit imprecise as to whether each threshold is a ‘greater than’ or a ‘greater than or equal to’ but I doubt it really matters (you’ve got to imagine there is a far greater margin of error on the terrain data used for the calculations).

A Strava segment (a user-defined route section over which Strava users compete for the fastest time) is automatically given a classification if it meets the required climb criteria. If you are riding a route without defined segments, Strava will automatically determine if you cycled up a classified climb and create a segment for it.

Which Is The Best App For Cycling Climb Classification?

If you’ve already read my comparison of Strava and MapMyRide, you’ll know that I am already a huge fan of Strava.

(If you haven’t read it, you should).

The calculation is clearer (i.e. they say what their methodology is) and it is not sullied by whatever adaptations MapMyRide make for the benefit of walkers and runners. That said, I’m sure an HC on MapMyRide is just as painful as one on Strava.

21 thoughts on “How Does Strava Determine Cycling Climb Categories?”