So that was painful.

I’m not exactly sure what compelled me to sign up to the Grindleford Goat. But sign up I did.

And pain and pleasure did I receive.

Marry In Haste, Repent At Leisure…

A couple of factors caused me to sign up:

It turns out that numbers 1, 2 and 3 can also be taken as excellent reasons not to do it.

And it rained. A lot.

What I Set Out To Do

So I signed up for the Billy Goat, a 108km route through the Hope Valley and pretty much forming a loop around the centre of the Peak District.

In addition to the lack of training (most rides over the last three months have been around an hour in length), my other main mistake was lack of research.

For various reasons (the main one being broadband problems at home) I hadn’t looked at the route in detail.

Normally I’d have traced it out on something like RideWithGPS.com and uploaded the route to my Garmin Edge

In this case I took as correct the description of the route on the Goat website. It claimed 108km of riding (which was correct) and 1,500m of vertical ascent (which was not).

Bearing in mind we’re in the Peaks, this distance:climbing ratio implies that there would be large, easy sections (I know what 1,400m of climbing over a 60km ride feels like). On a nice day, without wind, this I felt was just about doable.

If I’d taken a few seconds to click on the link to the Strava route, I’d have seen that the true climbing figure was more like 2,220m. Which implies no easy sections.

The true state of affairs hit me when, at around one third distance ridden, the Edge (not the guitarist) informed me that I’d climbed well over half my anticipated amount.

And at that moment I started to get a bit concerned.

Which is a tedious sub-heading.

The Goat was a refreshing alternative to many sportives in that:

Very civilised on both fronts. I didn’t have to get up at dawn’s crack and yet I still had time to fettle the bike and get my shizzle together before driving over to the start.

As a Saturday event, I still had time to do ‘Sunday activities’ (lawn mowing rather than church attending) on the Sunday. Plus, the celebratory, pain-dulling post-event alcohol consumption wasn’t compromised by being on a school night.

Other sportive organisers take note (if any are reading…).

The parking (which was on the village sports field) was considerable, making the logistics of reassembling my bike and getting on my ‘race kit’ stress free.

The queue to register took all of about 3 minutes, a similar time as that required to queue for the pre-ride hot drink (my choice bring the decent quality filter coffee).

There was a pre-ride briefing in the holding area, just before the start, before we were gradually released in groups of six or so to commence the ride.

And the ride commenced with a massive fug off climb. A 15-minuter. Which I was pleased about.

The stand out climb was that of Mam Nick.

It is nice and steep.

And apparently the 4,115th most difficult cycling climb in the world. Which makes me feel better.

To be honest, despite the frequent and sustained rain showers, I wore too many layers.

The temperatures on the ride were not that low. Wearing a thermal vest was perhaps a step too far. With it being the last (or first) of my many layers, I never quite found the motivation to fully strip down and remove it, once I’d started the ride.

I think this excess heat caused me to feel pretty grotty at times on the ride (or it certainly didn’t help).

What did work well was my rain jacket. It’s one I generally only carry in my pocket on rides, rather than wear.

Made by (for?) Castelli, I bought it on the eve of RideLondon 2013 at the event expo. It’s very much the bottom of the range, more akin to a plastic bag with a Castelli logo on.

Despite all these aspersions, it actually performed very well. Whilst not breathable (I assume), it was very easy to unzip and flush the hot air out of.

I found it easy and comfortable to wear unzipped, providing protection from rain dripping down my neck and road water being flung up by my rear wheel.

And that’s all I have to say on the matter of clothing.

Food stop one (at around 37km) was pretty standard fare. A selection of jelly beans, jaffa cakes, bananas and fruit squash, served in a damp car park.

As always, you feel for (and show gratitude to) the marshals that have to (wo)man the stall in the pouring rain.

The main food stop, which served both the longer Billy route and the shorter Nanny route, however, was a very fine example of the genre.

I absolutely wasn’t in the early wave of riders getting there. Indeed I must have been towards the back. Yet still there was an abundance of sausage rolls (which were doing a damn good impression of being fresh, rather than supermarket-bought) and slabs of cakes that, in other circumstances, would have brought on a pancreas-busting sugar spike.

There was also a coffee shop serving, er, coffee (which may explain the espresso cup complementing my Italian poise in the photo above).

Stop two, at 65km in, was also where I took the courageous decision to cut short the ride and follow the Nanny route back to the start.

An attempt at the rest stop to stretch out my quads (I’d been feeling the familiar pre-cramp sensation in the preceding kilometres), resulted in a calamitous spasm in the corresponding hamstring. I didn’t want to find myself at 100km, unable to ride and still 8km from home.

There was still 23km to ride, but thankfully most of it was downhill.

Participation in the (Half A) Goat was a bit of a wake up call. My fitness has clearly slipped a bit since going back to work (and who’s to say how good it was, even before).

A brief analysis of my ride on Strava suggests that I found it hard: 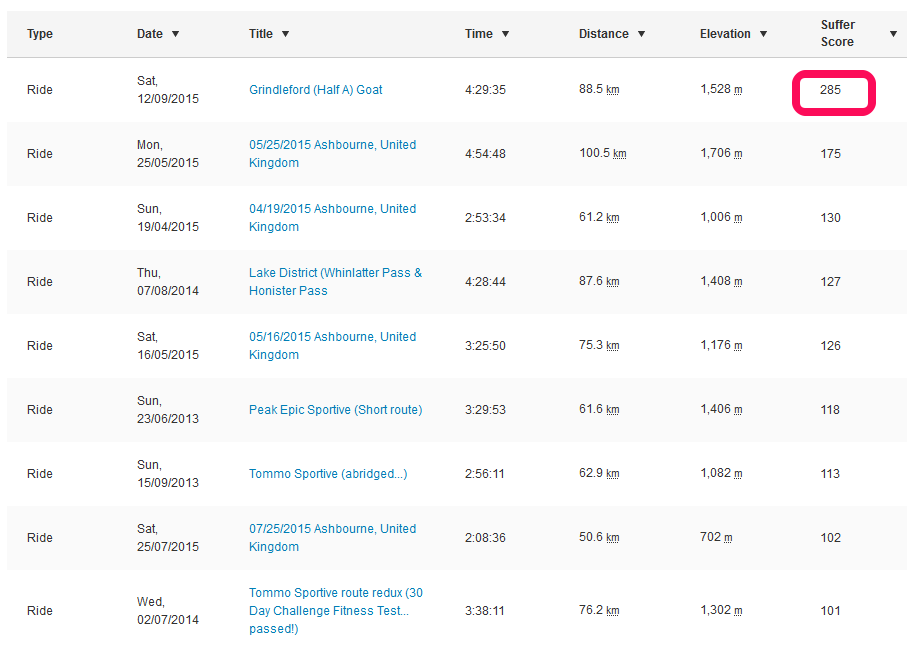 Time to think about what I’m going to do to increase my training over the coming, darker months.

3 thoughts on “The Grindleford (Half A) Goat: Good Sportive, Lack Of Training”