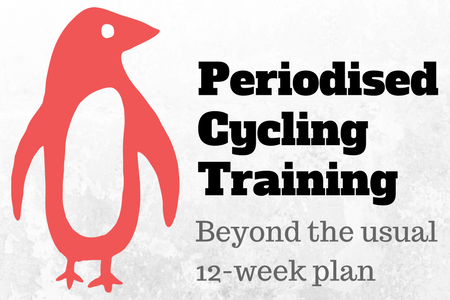 (You might have heard of this thing called ‘Google’?)

The thing is, whilst they’re helpful to a point, these training plans are generally designed to apply (and appeal) to a broad swathe of the Googling public. And they all seem to be 12 weeks long (I know, I generalise… some are 16 weeks long…).

Pick from ‘Beginner’, ‘Improver’ or ‘Expert’ and follow the programme (or not, as the case may be). I’m sure progress will follow.

But there’s a better way. A way of building your own training programme. One that lasts longer than 12 weeks.

And let’s try not to fall asleep.

How Do You Get Fitter?

Firstly, it depends on how you want to define ‘fitter’…

But rather than having to define each and every term (I’ve written long posts on these subjects before where I’ve attempted to be a little more scientific), let’s assume, by ‘fitter’, we mean having more endurance and speed such that we absolutely boss our long distance sportive of choice*.

(* And by ‘boss’ of course I mean, ‘not crossing the line as a sobbing, cramping wreck’.)

In short, the training principle is that we apply appropriate stress to our bodies in training such that the muscles, blood vessels, synapses and whatever else get a nice little shock and think*, “ooh, not sure I enjoyed that”. 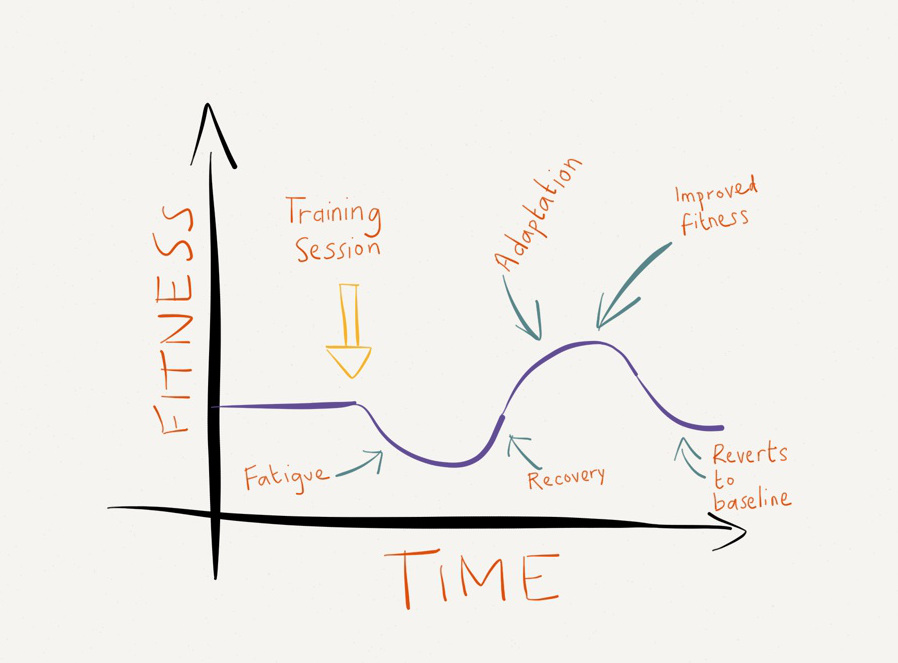 As a result, when the body is resting, said muscles, blood vessels, synapses, spleen all make small adaptions. When you next stress the body (i.e. the next hard training session), those little adaptions allow you to perform that little bit better, such that you can train that little bit harder.

The fact that the adaption process takes place whilst the body rests highlights the importance of having the right amount of rest. But that’s probably a topic for another post.

It feels a little obvious to say, but a training programme is essentially a series of stresses, like those described above, which, over time, result in little changes (improvements hopefully) that eventually turn into big ones (again, improvements…).

It’s easy to forget this when we devolve responsibility to a 12 week plan we got for free off the internet (or even one we paid money for).

And the rhythm of stress -> rest -> adapt applies not only at the zoomed-in session by session level. 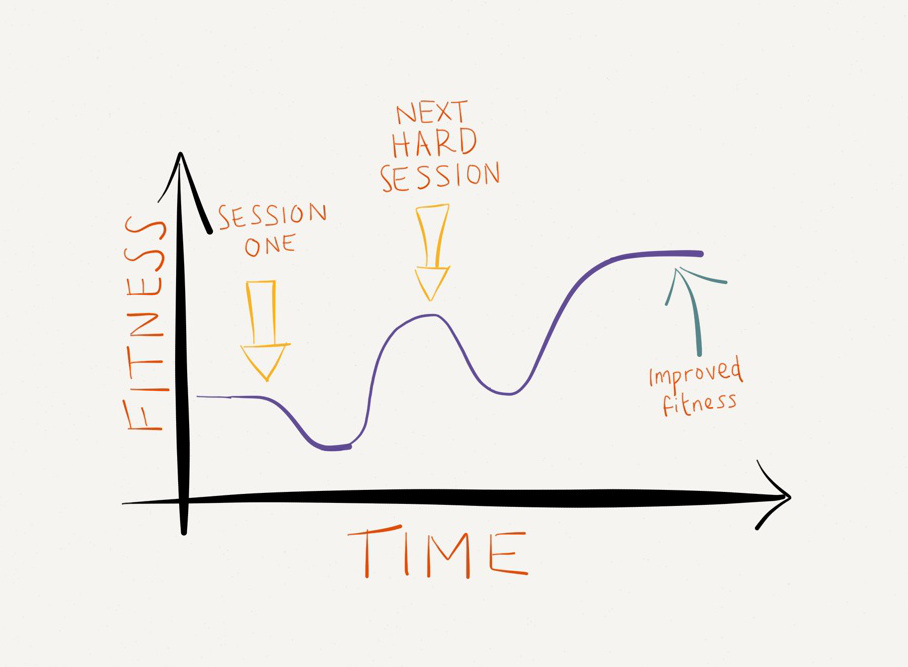 It can be considered at the level of arbitrary ‘seven turns on the planet’s axis’ that you Earthlings call ‘weeks’.

In a given programme, you might see a week’s training comprise of three harder rides (three rides?! Chance would be a fine thing) followed by a recovery ride.

Then in four weeks of a programme, you might see three weeks of gradually increasing training intensity (longer, harder, blindfolded, whatever), followed by an easier week to allow the changes to take effect (and to recover from riding into that tree).

I think you get the idea (wha’, you don’t?), but for completeness, pro riders (and maybe you and me in 2018) will gradually build training intensity and volume over the course of the year. Then, once the race calendar concludes, November is spent resting.

What Is Periodisation (In The Cycling Fitness Sense)?

Periodisation is, in the world of punctuation, what Americans do when they come to the end of a sentence.

It is also (more relevantly) an approach to training that sort of encapsulates the highly technical (and scientific!) ideas that I have been bandying around above.

Over the course of the training year, an athlete (such as you, yes you) starts with a general approach to building fitness and then gradually hones in on the specific requirements of their target event (or events). The programme moves from the general to the specific.

This is done by following a training programme that runs through a series of phases (or, I don’t know, ‘periods’?), where each one builds upon the adaptions made in the last.

Earlier phases might be about building a base level of endurance; later ones seek to retain that endurance whilst also increasing your ability to ride at threshold for a sustained length of time (like when you attack the peloton on Box Hill).

A Short History Of Periodisation

The periodisation concept was invented, like many great things, by the Soviets in the 1940s. It was then polished to a fine sheen by a Romanian sports scientist with the splendiforous name of Tudor Bompa in the 1960s, culminating in the release of his seminal work, ‘Theory and Methodology of Training’ which, in the name of science, I haven’t read.

As is my way on this blog, I am of course being flippant. Bompa writes the foreword to Friel’s Cyclist’s Training Bible, which in turn is based on the same concepts. It is therefore ‘seriously legit’, as the British Journal of Sports Science might say.

The final piece of wisdom that I’d like to impart in this week’s post is that the periodisation model is based on three different categories of, erm, period:

The macrocycle is the length of time into which fits the entire training programme for your target event(s). It’s the longest period in the periodisation model and will generally be 6 months to a year in length. The macrocycle is made up of a series of mesocycles.

Not much more to say than that.

These are periods that last anywhere from 3 to 12 weeks.

Each mesocycle tends to have a specific primary purpose: preparing to train, forming base fitness, building higher level fitness, etc. Rather than being called ‘mesocycles’ in day-to-day life (who talks about this stuff in day-to-day life?!?), you are more likely to see them go by the name of ‘base’, ‘build’, ‘peak’ etc.

Mesocyles are the main building blocks of a training programme. By stringing together a 6-week ‘Preparation’ phase, followed by an 8-week ‘Base’, then say a couple of shorter 4-week ‘Build’ periods, and a soupçon of ‘Peak’, you’ve got the makings of a pretty robust training plan.

You just need to decide what goes into each multi-week batch of training. That’s where the microcycle comes in.

A microcycle is a really small bicy….

No, a microcycle is the smaller unit into which mesocycles are broken down. Each microcyle represents a series of individual training sessions, of varying intensities and volume, mixed in with recovery rides and rest days, over the course of a number of days.

Depending on its total length, each mesocycle will be divided into 3–8 microcycles. Each microcycle might get progressively more intensive, with, say, a more relaxed microcycle at the end, in order to rest slightly and consolidate fitness gains.

Now I’ve danced around it, but there is probably a more straightforward name for a microcyle. You might recognise it. That word is ‘week’.

In theory it could be slightly shorter, or longer than a week. From memory (which I could check by picking the book off my shelf), I think Friel suggests a slightly longer microcycle in ‘Fast After Fifty’ to account for the fact that the elder statesman or stateswoman requires a little extra rest built into each microcycle than a standard week will allow.

But generally, given our lives tend to pulse to the rhythm of the weekly beat, it makes sense when trying to integrate a training programme of varying daily time commitments, to align time requirements with the weekly occurrences when they tend to appear.

If you’re looking for an alternative description of macro-, meso and microcycles, then you might find this post on the Training Peaks website slightly more coherent (or not, dunt bother me).

So How Do We Put This All Together?

Well, I think that’s a(nother) topic for another post.

Rather than go too theoretical (go theoretical or go home!), my plan in future posts is to focus on the mesocycles – the bigger, multi-week blocks of training, each of which is focused on developing a particular aspect of fitness – and look at them in the order that we’re going to do them. As we investigate, and then complete, each mesocycle, we’ll fill in the theory as we go.

And yes I said ‘we’. Together we will build fitness.

So, what are your experiences undertaking structured fitness training plans (cycling or otherwise)? Have they worked? If not, why not?