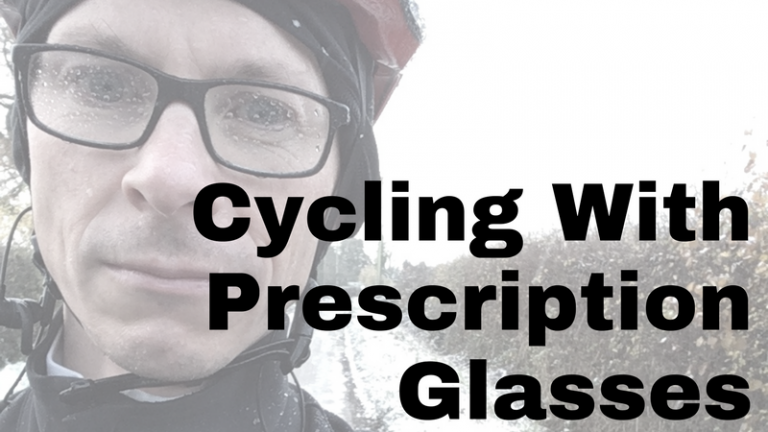 I was emailed a few years back by a Sportive Cyclist reader (the other one that’s not my mum), who rightly noted that I cycle whilst wearing prescription glasses. I can’t say for sure, but I have a sense that I might not be the only one…

Alan (for that ‘twas… ‘twis his name) then went on to supply some very helpful tips around cycling with varifocal lenses. I’ll share these later on in this post.

First though, since my glasses involve bog standard (albeit unusually prescriptioned) lenses, I thought I’d write more generally about cycling whilst wearing bins.

It’s at this point, I can offer the non-spectacle wearers amongst you to stand down. There’s nothing here to see (although if there was, presumably you’d see it very clearly indeed).

To be honest I don’t have much to say that’s profound in this area (as is the case in every area).

I wear glasses pretty much all the time. Generally I don’t find them a problem when out on the bike.

The only times I’ve struggled with glasses have been when it is raining so heavily that water droplets fill the lenses on one side. Meanwhile, on the other side, the lens fogs up to the extent that it renders me functionally blind.

Luckily my vision is not so bad. I can ride without any eyesight correction if I have to. I just have to scrunch my eyes up a little to manhandle my own eyeball lenses into usable form.

It’s hardly ideal though, not least because I don’t carry a spare glasses case around in my jersey pocket. I don’t fancy dropping and/or crushing my only set of specs. More fool me for only having one set of proper glasses.

That said, things are about to change because…

In fact, we interrupt your regularly scheduled blogwords with the news that I’ve MADE A VIDEO on the subject (recorded in October 2019).

So if you wear glasses whilst riding and you want to see a reasonably priced, and flexible, set of prescription sports glasses, give this YouTube vid a watch (and DEFINITELY hit the subscribe button):

The other scenario that can cause me issues with my day-to-day glasses is riding in very bright sunlight, where the surroundings give off glare. Think height of Mallorcan summer, riding up a pale rock-lined mountain road*.

The obvious mitigant (the one I practise) is generally not to ride in sunny bright conditions. Quite easy in England.

When I do know I’ll be riding in such conditions, say on a summer training camp, er family holiday, I do have a pair of prescription sunglasses (even if their budget nature give them a Stevie-Wonder-circa–1980s vibe rather than the Morpheus-from-the-Matrix look I would otherwise aspire to).

Well I haven’t felt an overwhelming need to.

Every few years I decide that now, finally, will be the time that I finally get into the habit of wearing contacts.

I go to the opticians, get my eyes tested, get retold how to put the contacts into my eyes and order another few boxes.

I thus have a drawer full of boxes of contact lenses with gradually worsening prescriptions. Which I’ve actually discovered have a ‘use by’ date. Which has passed. Some years ago. I now have a bin full of contact lenses.

The times I have worn contacts when cycling were:

I’d be interested to see what other readers think here.

Is there a strong argument for wearing contacts over your standard prescription glasses (clearly I don’t mean that literally) when road cycling?

As mentioned, our intrepid varifocal-sporting reporter Alan wrote in with some advice for us bespectaclazzi:

Thank you for your posts which are a welcome change from the inundation of rubbish sales emails!”

{Oh I’m terribly sorry. How did that get in there? The jury will please disregard that comment.}

“I noticed that you wear specs and as your pic is taken on your bike I assume that you need them for cycling.

{Monty: I do – in the sense I need them for pretty much everything}

I wear varifocals and need them all the time. They work reasonably well for cycling unless I am on the drops, when my vision needs to be over the top of the lenses, otherwise my neck aches from keeping my head up in an unnatural position.

I have spoken to my optician about a special bridge adaptor but nothing is available.

The drops problem is solved by placing a small piece of Blu Tack under the bridge of the specs to put [them] in a slightly higher position.”

“Needing varifocals restricts me in the use of any form of sports specs. I know you can get some models with custom made lenses. Most are too expensive, and would need to be made to overcome the correct line of vision. There would be an additional cost if my prescription changed.

I did have a dally with Optilabs and their inserts. They were very helpful but could not resolve the line of vision problem so my money was refunded.

I have another solution which really does work and allows me to wear my everyday specs (frameless).

Vistana are a manufacturer that make overglasses with a difference to any other design. The lenses wrap to the sides more in one piece and fit very well and look good too but I wish they would produce a style closer to sports styles. They come with different shades of lens.

As I say, not as cool as true sports specs but do the job well, and if combined with a sliver of Blu Tack, they are perfect.

I wonder whether you have any other ideas? Could be the subject of a post as so many of us must have this problem.”

And thus, like a thief in the night, Alan leaves with a flourish, but not without assuring us that he has no connection with any of the companies mentioned. Whilst I believe him on the Optilabs and Vistana fronts, I wonder if he is a secret Blu Tack magnate.

So What Do We Reckon, Spectacle-Wearing Brethren?

Has anyone had any particular challenges combining the wearing of glasses with the riding of bicycles?

Does anyone have any tips, whether for general glasses wearing or niche specta-cyclists? Varifocalists, contact lenseurs, etc.

29 thoughts on “Wearing Prescription Glasses Whilst Cycling (And What About Varifocals?)”