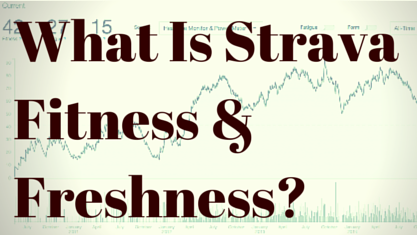 Your ability to ride a bike quickly (or for a long time) on any given day is governed by two factors: fitness and fatigue*.

(* Okay, there are more factors, but let’s keep things simple).

Your fitness dictates how attuned your body is to fulfilling the demands that you want to place upon it.

Your level of fatigue (or tiredness) dictates whether your body will perform at this level of fitness on the day of your event (or hard training session).

Under this simplistic model, fitness minus fatigue equals form (i.e. your ability to perform on the day).

The Strava Fitness and Freshness chart is a visual representation of these three factors, plotted over time. It could help you work out if you’re fit, knackered or pulsating with athletic vim(to).

Bad news: the Fitness and Freshness chart is a ‘Premium’ feature within Strava (not an affiliate link, sadly…). You’ll have to pay to upgrade your Strava account if you want to see it.

Good news: going Premium only costs £3.99 a month in the UK (I think it’s $6 in the US) and includes a host of other usual features, including Sufferfest videos for turbo training.

Not bad or good news (or, indeed, news): you need to be using a power meter or heart rate monitor whilst out riding and then upload this data to Strava. If you’re recording rides using just the iphone/Android app (or putting things in manually?!) then you won’t be able to see a populated chart.

Back to the show.

We Didn’t Start The Fire

Or rather, Strava didn’t.

The Fitness and Freshness chart, and the concept that underlies it, has been around for some considerable time.

The chart itself closely mimics the Performance Management Chart invented (if that’s the right word) by Hunter Allen and Andrew Coggan and included within their oft-cited book, Training And Racing With A Power Meter (as well as in the TrainingPeaks training software that they helped create).

Because we all love a bit of training theory.

The chart aims to represent visually a simplified training model used by athletes and coaches in order to think about, plan and analyse their training and racing schedule.

Fitness builds slowly over time in response to the amount, and intensity, of training you do. You can therefore define (and quantify) ‘fitness’ as the accumulated amount of training that you’ve done over a medium-term time frame (say 4 – 6 weeks).

Strava labels the amount of training done as ‘Training Load’ (the equivalent Hunter/Coggan/TrainingPeaks term is Training Stress Score, or TSS).

I’m not sure Strava publicly state what they use for x but it’ll be somewhere around 40-45 days (you could work it out manually if you’re that way inclined).

But (and it’s an important butt), fatigue responds quicker to training stress (or Training Load in Stravaspeak) than fitness does.

Fatigue can therefore be thought of as the accumulated training you’ve done over the short term (say the last 7 days).

Like the Fitness data points on Strava’s Fitness and Freshness chart, the Fatigue number is a rolling-average Training Load, this time calculated over y days. Again y isn’t publicly stated, but we won’t go too far wrong if we just assume that it’s 7 (as in the last 7 days, capisce?).

As mentioned above Form is simply calculated as the Fitness number for that day minus the Fatigue number.

It feels unlikely that something as complicated as your body (yes, I’m looking at you – your body) follows precisely such a simplistic model.

But it’s a useful way to think about things.

Alternatively, if you throw in a recovery session or two, or have a rest day, your tiredness will begin to dissipate quickly, whilst your long term fitness will remain largely constant. Your form will start to increase.

On event (or race) day, you want to be in your best possible form.

According to the model (and real life) and depicted in the Strava F&F chart, the way to maximise your form is to reduce heavily your training load in the 7-10 day period running up to the event.

During this period (let’s call it, I don’t know, the taper?), the fatigue element of the equation falls right back down, whilst fitness remains unchanged (more or less). Thus, the figure calculated for form will be as high as it can be (mathematically, and one hopes in reality as well).

The F&F is only currently available for cycling activities on Strava, despite frequent desperate pleas from the Strava running fraternity (wait, what, there’s runners in there?).

Explanation (from a History graduate): That’s maths, innit. The Fitness data is smoothed over a longer rolling-average period.

Originally the chart was only available to cyclists that used power meters (the power data being used by Strava in order to calculate Training Load). In late 2014, the F&F chart was made available to users logging heart rate data as well (a Training Load-type figure can be calculated based on how much time is spent in each heart rate training zone – this is the ‘Suffer Score’ that Premium users see for each ride).

Suffer Scores and Training Load numbers are correlated but the correlation differs between individual people.

If you’re using both a power meter and a heart rate monitor, and have sufficient data points logged for Strava to work out the correlation, then the chart will use both types of data. This is useful if you have multiple bikes, not all of which have a power meter (which is pretty much every non-professional rider). The HRM-only rides will be translated for you into power meter equivalent terms and shown on the chart.

If you do a ride with neither the HRM nor the power meter then, for the purposes of determining your fitness, Strava deems the ride never to have happened, even if the ride is logged in their system.

TrainingPeaks are past masters at going in-depth on a (training) topic.

Here is their explanation of their Performance Management Chart (the chart that started it all…).

(Note: don’t try to manipulate your charts with steriods (or any other sort of performance-enhancing je ne sais pas.)

Of course you do.

The ‘training theory’ component of this post (such as it is) follows on from a series of posts I did back in 2014, which I then consolidated into one ‘Ultimate’ post.

The aim of the series/uber-post was to help you (and me) understand how and why training works, and then to build a bespoke training programme.

Rather than follow blindly a generic training programme (or not follow it), I wanted to find out more about the levers you can pull and the buttons you can press to make training more effective in building fitness.

Here is the link to that post: The Ultimate Guide To Fitness Training For Road Cyclists

5 thoughts on “What Is Strava Fitness And Freshness?”