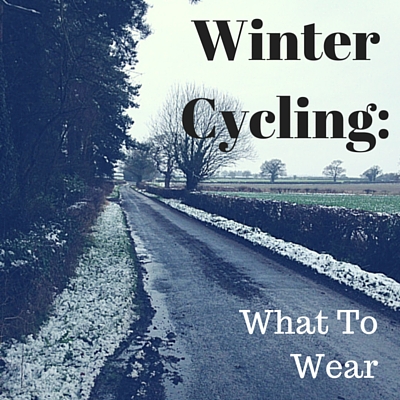 Cycling outside in the winter is difficult for all manner of reasons.

‘Nice’ winter weather presents its own challenges. A beautiful clear morning tends to go hand in hand with frost and ice. Ah, the frustration of wanting to enjoy the early morning light over a white-crusted country landscape, but knowing that you’re one false pedal stroke away from an ignominious pratfall and a broken collarbone.

And then we have snow.

(Not this type of Snow. Or this one.)

The window of cycling opportunity therefore tends to be a small one. A small one with a broken latch.

So you want to have a tried and tested winter wardrobe, ready and waiting for when the opportunity presents itself.

And so I’m going to share what I wore on a recent winter’s ride, to help illuminate the issue at hand (and to present you with a bland list of clothing items).

This post is really a humblebrag about the fact that last Sunday I went out for a ride when it was heavy grey skied, temperatures hovering around zero. And it had just started to snow.

It’s part of my 35 days of cycling challenge (more about that here). Much of that challenge has been conducted on my indoor trainer, in my (frankly, damp) garage, at about 8pm, once I get back from work.

A side effect of so much ‘quality time’ with my turbo is that, come the weekend, when I can ride in daylight hours, I am more than desperate to ride in the great outdoors.

The same motivation that had sent me out on the preceding Saturday morning with clear evidence of frozen slush and icy patches on the ground (a ride I aborted after sense finally prevailed) girded my loins to an hour or so of suffering in Sunday’s grim wintry conditions (thankfully the floor-based ice had melted in the intervening 24 hours). 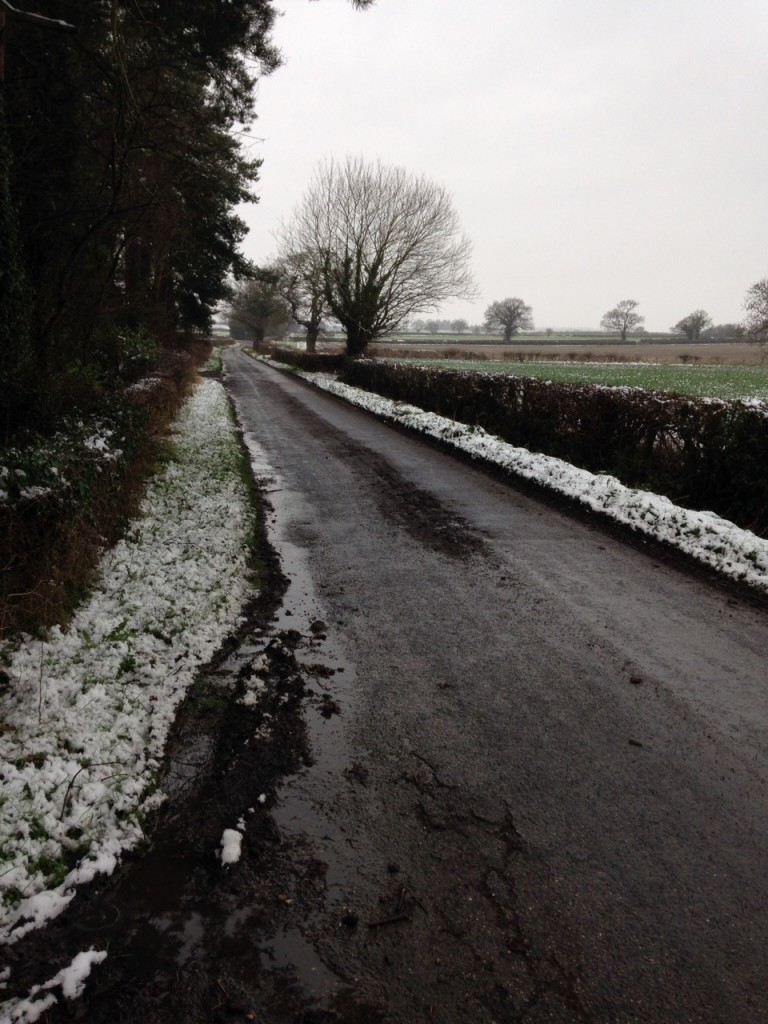 But it occurred to me as I turned for home that, apart from wet, ice-block toes (which I’ll come onto later), I had (inadvertently) achieved the Goldilocks equilibrium in my choice of riding clothes.

And I felt quite smug. So I thought I’d share what I wore with you all, in the hope that it will be some help as you select your armour for your next winter ride. And then you can be smug as well.

Oh, and also it gives me an excuse to show a picture of me, evidencing my heroic performance, so you can praise me.

Starting at the top.

Well, I did wear my new , and a review will surely be on the way, but I’m pretty sure any (that meets the required safety standard) will do you for a winter ride. 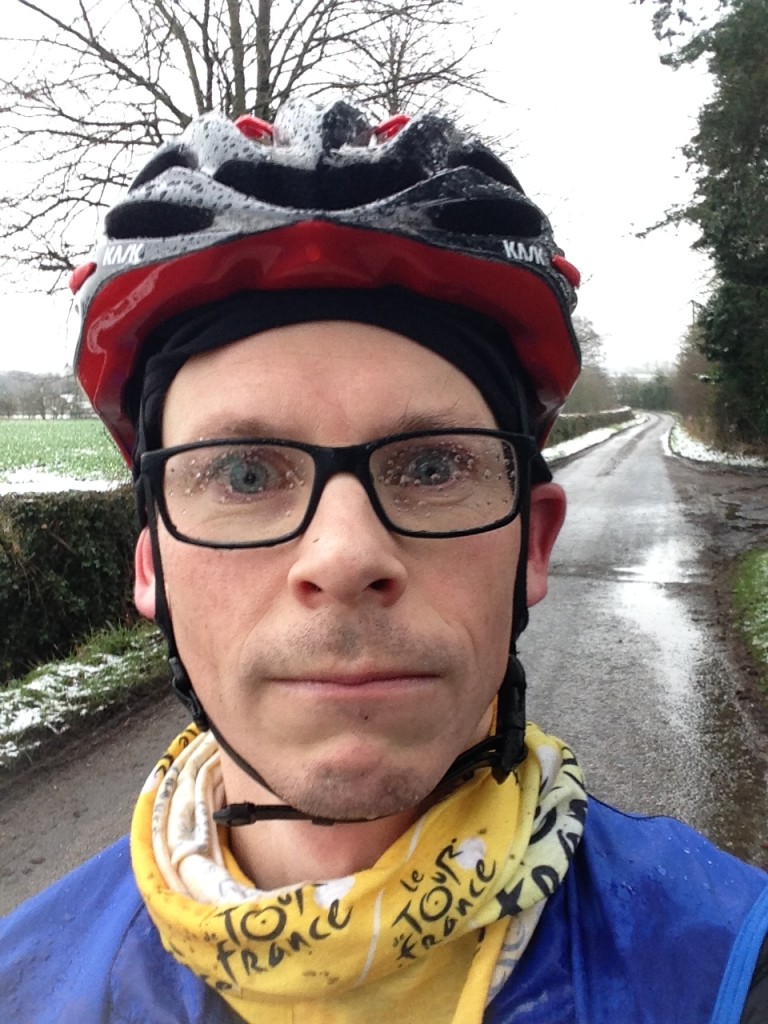 I guess an aero , without air vents, might make more of the water run off and away from your head, but there’s not much in it. Not an argument for looking a complete fool.

I did wear a skull cap though, under my .

[Mont scrabbles around for a random statistic about percentage heat loss from the head. Fails. Remembers that scientific accuracy is not one of the central tenets of this website].

I’ve owned my skull cap (don’t even know if that’s the right term) since the start of recorded time. It’s a Nike one and I don’t even know if it’s a cycle-specific one (although it’s Armstrong-era, so maybe it is). If I was approaching this afresh, I’d see it as an opportunity to get some fluoro Castelli gear without having to remortgage my house.

Keeping it yellow, there is a name (that sadly escapes me) for that yellow thing that is wrapped round my neck (a name other than “an exercise in poor fashion sense”). Those with the eyes of a falco subbuteo will notice that it is heavily branded with the Tour de France logo. I got it in a TdF goody bag that I bought from the caravan that preceded the race as it sped through God’s own county (of Yorkshire) in 2014.

Now you don’t have to get a camp yellow one, but a [necky thing] of some sort is helpful for stopping those icy gusts from going straight down your neck, as you cycle head down into the driving snow. As I like to do.

I don’t have a link for you to buy one because, er, not knowing what they’re called, I can’t quite seem to Google it…. Some cycling information website this turned out to be…

My Body Is Hot 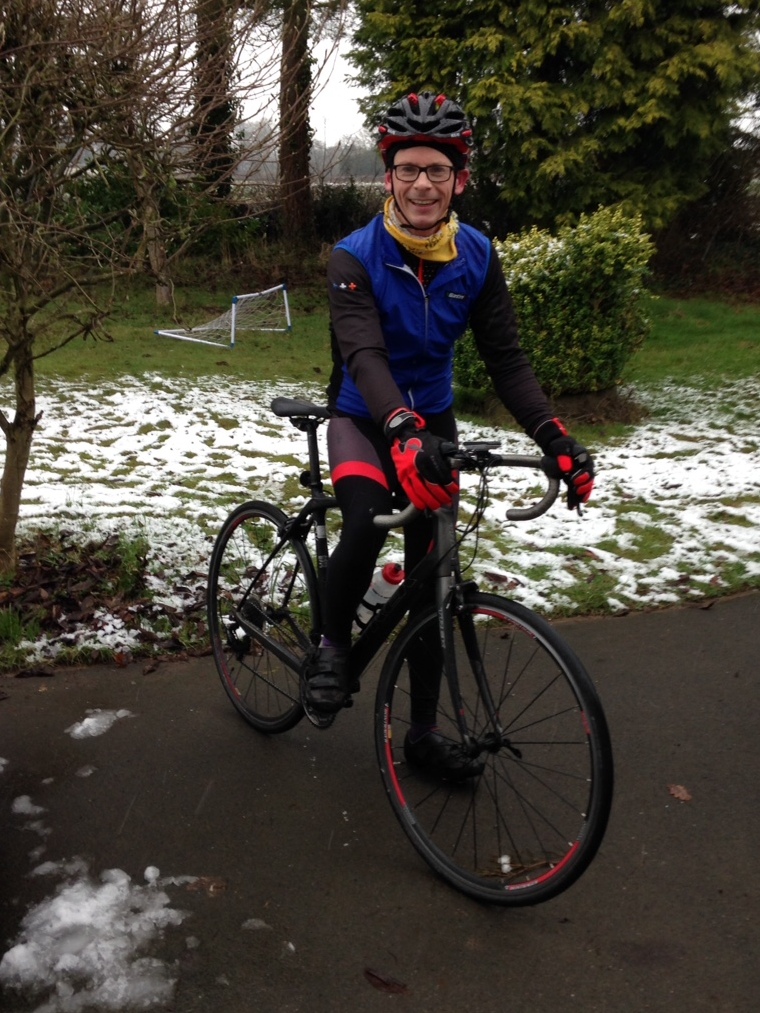 See how I happy I look!

That’s because 1) the ride is over; and 2) I am pleased with my clothing choices.

Except my shoes – or rather the lack of anything covering them – more on that in a minute.

Inside Out (You Turn Me)

What you can’t see is that I’m wearing a base layer. And I’m pretty sure it will have been ‘technical’ in nature (I can’t remember exactly what I had installed).

At the very least it will have been a high-wicking long-sleeved number from Marks & Spencer (of all places).

If I was being particularly conservative, and I think I was, then it was a Patagonia long-sleeved base layer that 1. keeps me very warm; 2. generates sufficient static to power my bike lights; and 3. gives off a certain musty hum that says, “I’ve been wicking away sweat for over a decade”.

Better Than A Castelli Gabba?

Okay, I don’t know if the cycling jacket I wore is better that the Castelli Gabba. It must be close though. And certainly a lot cheaper.

I have nothing but good things to say about the dhb Blok Micro Softshell Windslam Roubaix jacket. Mainly because I’ve used up all the words just saying its name.

In short, it stops all the wind. And laughed in the face of snow.

Nope. Me neither. Red wine again. 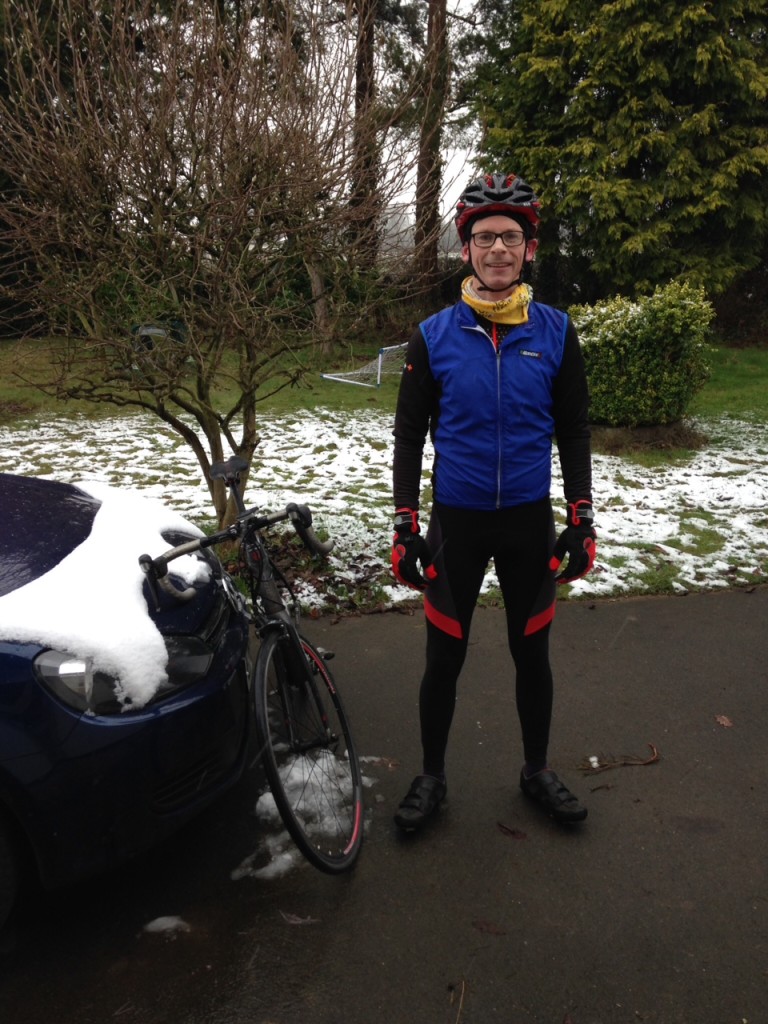 That blue affair is a little Italian waistcoat that I’ve had loads of use out of. It’s perfect for giving a little weather-resistant boost to whatever else you might have on your torso.

In this case (in extremis) I was boosting the already-capable dhb jacket. In warmer times I’ve worn it over a long- or short-sleeved cycling jersey, just for a little extra wind protection on my tum tum.

I now have to troop to the utility room (where it lives) to find out who makes it.

Okay, it’s made by Santini. And the label assures me that it’s even made in Italy (oooh).

Again it was a gift (this time of the 35th birthday variety) from my sister and her husband. Sometimes I feel those two are the only relatives of mine that actually understand me…

Well, they wear tights when the weather conditions demand it. And for almost the first time this winter, climatic conditions warranted the wearing of dhb ASV Roubaix Bib tights.

Again a review is on the way, but like I was (am) with the dhb jacket above, I’m impressed.

The ‘Roubaix’ part of the name refers to the fluffy lining to the lycra. And I don’t half like a bit of furry fabric wrapped around my thighs on a wintry bike ride.

Now seems to be the time to buy them (presumably whilst everyone else is looking forward to the summer). Wiggle has them on sale.

So I appreciate that the gloves shown in the photos make me look like I have masseev hands.

That’s because they are substantial gloves. So substantial, in fact, that I wrote a whole post about them (it’s a review rather than a description of how big they are).

They’re made by a company called Sealskin (based in Norwich, for those who are fans of East Angular).

I suffer from Raynaud’s phenomenon (me na me nah). Which is in fact a thing.

I suffer from very uncomfortable hands in cold weather, particularly if I’m not wearing suitable gloves. And there is no greater praise than to say that these gloves are very suitable indeed.

Doesn’t stop ’em being masseev though.

The Only Improvement I Would Make To My Winter Cycling Outfit…

… would be to get a pair of overshoes.

My Specialized Road Elite (Elite – ha ha ha!) shoes have quite few mesh sections on their topside (a technical term used by shoemakers, or cobblers). The mesh is ideal for letting out excess heat in the summer. Less good at stopping excess water getting in during the winter.

If I had my time again, I’d invest in a good pair of neoprene overshoes.

Luckily, whilst my feet got cold and wet on this ride, as they’ve done many a time before, I don’t suffer the same Raynaud’s related pain in my feet as that in my hands. Just the normal numbness (numbity?) that normal people get.

If nothing else, I would have thought you’re coveting that yellow Tour de France neck thing. And I wouldn’t blame you.

Some of the links above (the ones to Amazon and Wiggle) are affiliate links. If you click on them and then subsequently buy something, I get a commission. You pay the same price.

Finally, if you have any suggestions on clothing that you swear by during the winter months, please do share them in the comments section below. We’re always in the market for a good recommendation and with retailers looking to clear their winter stock, now might be the time to pick up a bargain.

Until next time, safe cycling all!