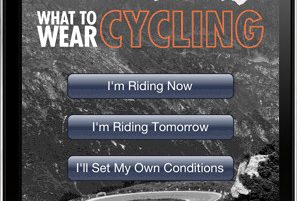 Today I’m going to review the cycling app, ‘What To Wear Cycling’.

This wasn’t intended to be today’s post. In fact, as you’ll see below, I was struggling to write this post full stop (or ‘period’, if you’re that way inclined).

But something happened and now it is today’s post. You’re just going to have to deal with that.

What is ‘What To Wear Cycling’?

It’s an iphone app, which tells you … what to wear when cycling.

Using either your current location (via GPS) or another place that you can specify, the phone has a look out of your (web) window and tells you what you need to be wearing in order to be comfortable on the bike.

If you’re not confident in the internet weather feeds for your area, you yourself can look out of the (actual) window and specify the weather conditions, which the app will use to make its recommendations.

Well, to be honest, I wasn’t sure I needed this app. In fact I was pretty sure I didn’t need it.

I’m good at interpeting weather forecasts, the skies and the tea leaves. I generally select the right cycle clothing I need. I questioned whether an app could best my finely-tuned instincts.

I didn’t want to write what would be (at best) an equivocal review (not least because I am massively impressed at anyone that gets off their backside and makes any sort of product to sell).

So What Changed My Mind?

I’ll cut to the chase. The app costs £1.99 / $2.99 (disclosure alert: appmeister Christopher gave me a free download). This weekend the app provided me with greater than £1.99 of value.

On Sunday I took part in the John ‘Tommo’ Thompson Memorial Sportive (relax, it’s not in memory of the much-loved Cold Feet actor, who remains with us).

The long-range forecast for the event had initally looked good. This volte-faced over the days running up to Sunday. By Friday evening, the weather chaps on TV were talking about storms and gales.

Despite all of this, I was still in summer mode. My sister and her boyfriend were coming up from London to ride, as was a friend from Zurich. I was telling them not to worry about the conditions. I was planning to ride in shorts, jersey and summer bike mitts, with a lightweight rain jacket (a glorified plastic bag) in my back pocket.

On the way up from London, my sister stopped at a bike shop in Derby (Samways, since you’re asking) and bought winter tights, shoe covers (which, as an aside, I’m going to invest in) and a substantial rain jacket. Still I remained confident that my assessment of the conditions was correct.

Finally, after much discussion over dinner on Saturday, I remembered that I’d downloaded the ‘What To Wear Cycling App’. I decided to give it a go.

I pressed the button titled ‘I’m Riding Tomorrow’, and confirmed my current location. It came back with the following (paraphrased):

I went with the app’s recommendations.

The key changes versus what I’d planned to wear were the additions of the base layer, the full-fingered gloves and a pair of my wife’s knickers.

And I have to say it, I’m glad I did. It felt a lot colder than I expected. In particular, if I’d been wearing summer mitts, I wouldn’t have enjoyed the ride at all.

The weather conditions weren’t even as bad as the forecast had suggested. If they’d been as expected, and I’d gone with my own judgement, I think I’d have experienced a world of pain.

When Is The App Useful?

I stand by my original assertion that I’m good at deciding what to wear when riding (though you now probably disagree). In this case, however, the app saved me considerable discomfort.

My take is that ‘What To Wear Cycling’ is most useful during ‘shoulder months’ – the times of the year when the weather can’t remember if it’s summer or autumn, winter or spring. The times when you’re most likely to forget how cold (or how sometimes how warm) it can be.

I’d got used to wearing summer gear (the week before I’d been basking outside a cafe, sipping an espresso). The app took a cold hard look at the numbers and told me that I was a rose-tinted fool that needed to wear some women’s underwear.

I imagine the app would also be useful if you’re riding away from home, where you’re not used to the conditions. This doesn’t even have to be out of the country.

My sister’s fiancé rode the Peak Epic with me back in June. He’d been used to riding in London and, until the day before, when I made him buy one, he didn’t even come armed with a rain jacket. What To Wear Cycling would at least have told him the required kit list in advance.

Do I Recommend You Purchase ‘What To Wear Cycling’?

Some of you probably have the planning for bike rides down to a fine art. For those people, I doubt this app will tell you anything you don’t already know.

For everyone else, all I can say is after initially being sceptical, WTWC saved me from four hours of desperately wishing that I was wearing proper gloves (and days of nursing chapped hands back to life). I wore an appropriate jacket and felt a comfortable temperature throughout. My enjoyment of the ride was much enhanced.

You can download What To Wear Cycling from the Apple app store.

12 thoughts on “What To Wear Cycling: Review”